Canadian fashion brand Line the Label is in the spotlight after Meghan Markle wore one of its coats during a photo-op for her engagement to Prince Harry.

Canadian fashion brand Line the Label is in the spotlight after Meghan Markle wore one of its coats during a photo-op for her engagement to Prince Harry.

The white wool wrap coat has been renamed the "Meghan" and is already sold out. The same coat in a rose dust colour is selling for $799.

Markle and Prince Harry announced their intent to marry this morning, and posed for engagement photos at Kensington Palace.

Line CEO John Muscat says Markle has worn the label's clothes for years, including at the closing ceremonies of the Invictus Games in Toronto in September.

Markle, who is from Los Angeles, has supported many Canadian designers since she moved to Toronto in 2011 to film the TV series "Suits."

Earlier this year, Markle was seen at a wedding in Jamaica wearing a floral maxi-dress by Erdem, the label run by Canadian-Turkish-British designer Erdem Moralioglu.

Not all of her Canadian fashion choices have been at such elite price points. 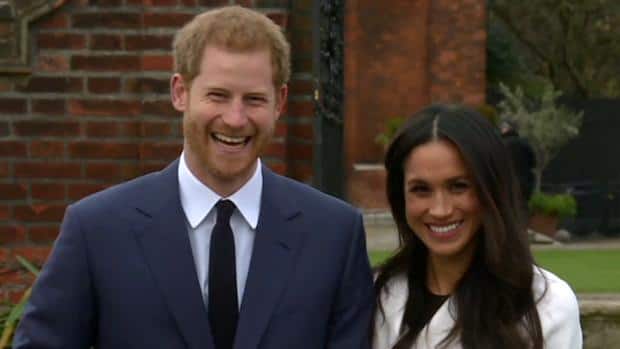 3 years ago
1:07
Couple pose for photo-op on grounds of Kensington Palace in London 1:07

Markle attended the opening ceremony of the Invictus Games wearing a mid-length maroon chiffon dress from Vancouver-based retailer Aritzia, which retailed for $185, and a matching leather jacket by Montreal outerwear brand Mackage.

And in 2015, Markle was named "brand ambassador" for Canadian retailer Reitmans, which involved modeling for campaigns and curating her own "capsule collection."

"Meghan has an effortlessly chic sense of style, which we've always admired," said Muscat in a statement.