​Partners in parenting, not love: Singles ​pair up to raise a child

A couple arrange to meet after connecting on Modamily, a social network for single people who want to have a child and share the responsibilities of raising it with a partner. A romantic relationship is not necessary.

Living apart, but having a child together, singles connect through co-parenting websites

It was a beautiful fall day in 2014 when Tatiana Busic made her way to a Toronto café to meet Brendan Schulz.

"I knew right away that I liked him. I also thought that he was just gorgeous and lovely."

Afterward they went for a walk that Schulz said "was a bit picture perfect."

Picture perfect, but not what you would call a traditional first date.

These two had arranged to meet after connecting on Modamily, a social network for single people who want to have a child and share the responsibilities of raising it with a partner.

A romantic relationship is not necessary.

In her late 30s at the time, Busic already had a daughter from a previous marriage and wanted to have another child.

Schulz who is gay, was in his 40s, single and still yearning to be a dad.

After a few months getting to know each other, Busic and Schulz decided to try for a baby and started their own artificial insemination at home. 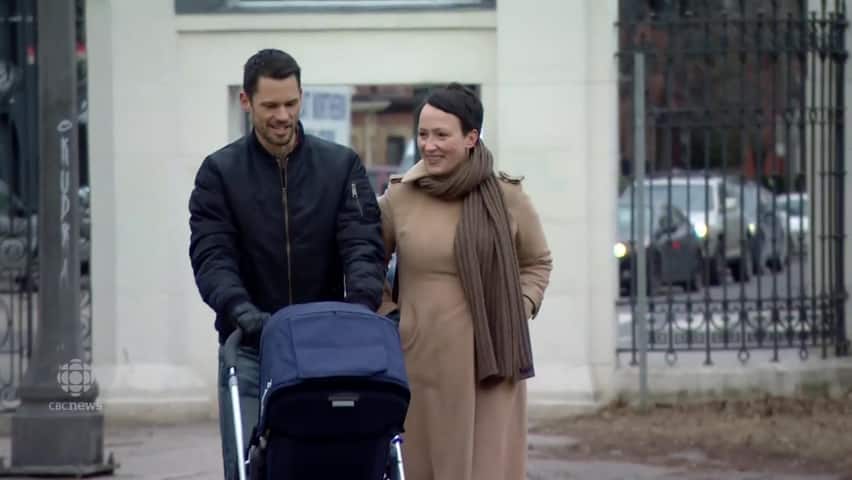 Singles partner up in parenting

4 years ago
5:56
Tatiana Busic and Brendan Schulz are both single. They're co-parents but not romantic partners. 5:56

"I was a little unprepared for how novel of an idea this seemed to everybody," said Busic.

Her friends and family questioned her decision.

"What are you doing? You know this is crazy? Are you giving up on love?"

According to Modamily, 2,000 Canadians are registered on its site.

Another 1,000 have signed up with Family By Design, just one of several co-parenting websites out there.

The sociology of co-parenting

According to the Centre for Family Research at Cambridge University in the U.K., "elective co-parenting has been more prevalent among gay men and lesbian women."

"However, there has recently been an increase in co-parenting arrangements among heterosexual men and women."

This finding came from an initial online survey of 102 participants that was published in 2015.

The research centre found most of the people pursuing this parental arrangement were single, well-educated and financially secure.

Tabitha Freeman, one of the researchers, said a more in-depth look at this modern form of creating a family is in the planning stages.

"Co-parenting obviously for us raises a whole new set of questions about the well-being of children," Freeman said. "The psychological well-being, the social relationships, the social functioning of these children growing up in these families."

According to sociologists looking at this new phenomenon, there are several societal factors contributing to it, including the fact that "adulthood as we define it has been delayed," said Andrea O'Reilly, a York University professor who teaches women's studies and family courses.

In her generation, she said, getting married, having children and a job by your mid-20s was the plan.

Today, for many people, "adulthood" doesn't begin until the age of 30.

"Their energy has been elsewhere … getting their education, their career established," she said.

"They wake up maybe at 35 and go, 'Oh shoot, I forgot I should have been looking for a guy or a girl because I want to have a kid.'"

She thinks de-coupling romance and marriage from having children is a positive movement.

Charlotte Osler sees it as a consequence of trying to find connections in the modern world of dating apps.

"Now we don't have to be committed."

The 36-year-old nurse always wanted to have a traditional nuclear family.

Recent fertility testing suggested the need for her to get pregnant within the year.

Co-parenting is now an option she is considering.

"I love a father-child relationship and I want that for my child," she said.

That's why she has asked three male friends to consider having a child with her and is now waiting for a response.

Family law lawyer Sandra Alsaffawi suggests that all parties entering this type of parental arrangement should seek out legal advice from their own lawyer.

It's essential in protecting their rights as parents, as well as the rights of the child," said Alsaffawi.

"Contracts are in place to ensure that the spirit in which things started is how things continue down the road because as relationships deteriorate​ and circumstances change, there can be a power differential."

Alsaffawi advises that the contract cover all stages of the child's life and all aspects of parenting.

She also said it should be finalized even before the child is conceived.

Schulz and Busic never consulted lawyers, but have their own parental agreement that covers "finances, health choices, education choices, everything," said Busic.

"Even how we would handle conflict between the two of us."

The birth of now seven-month-old Milo has made the dream of one family operating out of two households a reality.

"We get time together, we get time on our own, so it's a really great balance," said Schulz.

Makda is a CBC Video-Journalist, who from time to time fills in as TV news anchor and a newsreader on Here and Now and Fresh Air. She worked in newsrooms in Sudbury, Sault Ste. Marie and Windsor before moving back home to Toronto. makda.ghebreslassie@cbc.ca