The City of Toronto has sent a warning letter to a Toronto carpenter who is building tiny mobile shelters for unhoused people ahead of winter and it says it could take legal action if the structures remain on city property.

The City of Toronto has sent a warning letter to a Toronto carpenter who is building tiny mobile shelters for unhoused people ahead of winter and it says it could take legal action if the structures remain on city property.

But Khaleel Seivwright, 28, a Scarborough resident, said he is determined to keep building the insulated structures, known as Toronto Tiny Shelters, and is already planning a workaround to avoid legal action from the city.

Any new shelters he builds will be placed on private property and there are churches already willing to house them on their grounds.

"At first, I was pretty upset about it," Seivwright said on Saturday about the city's warning.

"Then I was collecting myself and realizing that OK, we still have to build these things. There's still going to be people that need them, regardless of what the city is saying about them. We just find a way to work around this now."

After initial positive talks with the city regarding a possible partnership, Seivwright was served with the formal written warning in a letter dated Nov. 19 from Janie Romoff, general manager of the city's parks, forestry and recreation division.

Romoff said there are 10 shelters built by Seivwright currently on city property at several locations.

"The city has not issued permits or in any way consented to the placing of these structures on its property," Romoff said in the letter.

"The City of Toronto therefore demands that you immediately cease the production, distribution, supply and installation of such shelters for the purposes of placement and use on city property. Should you fail to do so, the city may, among other remedies, hold you responsible for the costs of removal of such structures."

Romoff said the shelters are interfering with the city's work to move people off the streets, out of parks and into shelters or temporary housing.

"Your activities are interfering with this initiative and may have the effect of encouraging individuals to continue to occupy public property in conditions which are both dangerous and unhealthy," Romoff said.

"Therefore, be advised that should the unlawful installation of these structures on city property continue, the city reserves its right to take legal action and/or employ any and all enforcement tools available to it under the relevant statutes and bylaws including, but not limited to, removal of the structures from city properties without further notice."

Seivwright said the shelters are safe and outfitted with carbon monoxide detectors and smoke alarms.

The walls of each shelter are lined with a thick layer of fibreglass insulation normally used in residential construction. There is a door, a small casement window and spinning caster wheels at each corner of the base. The whole thing costs about $1,000 in new material and takes Seivwright eight hours to construct.

Seivwright said he sees the shelters as a temporary alternative for people who would otherwise be sleeping in tents or under tarps and blankets. He is paying for the project largely through a GoFundMe online fundraising campaign, where he has so far collected $129,700.

Street nurse Cathy Crowe, for her part, said she sees Seivwright as a "hero" and she was angry to hear he received a warning letter from the city. He is aiding people who are suffering, she added.

Crowe, who used to oppose this kind of structure, said she has completely changed her mind in the last month.

"I really feel the city is failing drastically and that this is a life-saving measure," Crowe said. 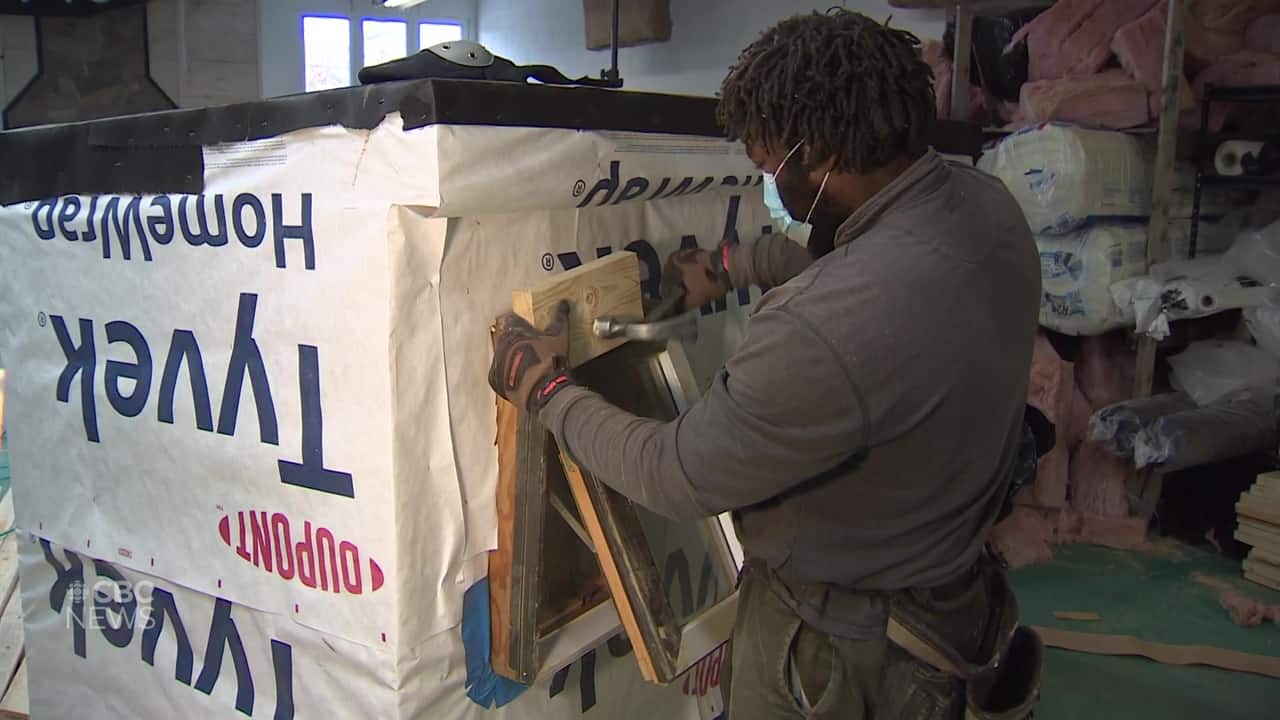 5 days agoVideo
1:42
After he received thousands of dollars in donations and supplies from strangers to build mobile shelters for people experiencing homelessness, the city has sent Khaleel Seivwright a warning letter, telling him to stop building and supplying his shelters if they'll be on city property. But as Angelina King tells us, he's determined to keep the project going. 1:42

Crowe said there are an estimated 1,000 people sleeping outside in Toronto right now during the pandemic.

Without more hotel rooms, rent supplements or housing allowances provided by the city and a provincial ban on evictions, people need somewhere safe to stay, she said.

Seivwright said of his shelters: "It should be considered as a part of the solution instead of something that needs to be removed."

The city, meanwhile, said in an email on Sunday that its parks bylaw prohibits any camping, including homeless encampments, in city parks and there are no tents or structures allowed.

"Conditions in encampments create significant health and safety concerns for those living outside, as well as for the community-at-large," said Tammy Robbinson, spokesperson for the city.

The city estimates the number of people in Toronto encampments is between 400 and 500 and it said open flames, generators, propane tanks as well as lack of access to water and sanitation increases health and safety risks for people in tents and nearby areas.

Toronto Fire Services has responded to reports of at least 189 encampment fires this year.

"Encampments are not cleared until notice has been provided and everyone sleeping on-site is offered a safe, inside space. The City's Streets to Homes outreach team continues to engage with those living outside to encourage them to come inside," Robbinson added.

Since mid-March, she said the city and its partners have referred nearly 1,100 people from encampments to inside spaces and the city is making available 560 additional spaces as part of its winter services plan.