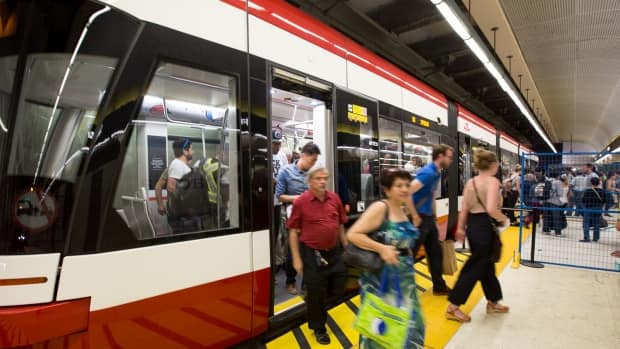 TTC to give kids a free ride

6 years agoVideo
3:33
Mayor John Tory announced Monday that while the cost of most TTC fares is going up, children under 12 will now ride for free. 3:33

However, fares for other riders will rise by 10 cents.

Tory, and TTC chair Josh Colle and CEO Andy Byford said only cash fares — $3 for an adult per ride — won't go up.

During his campaign for mayor before he was elected in October, Tory committed not to raise fares. However, he said Monday he needed to backtrack on that promise when he assessed the TTC's financial situation.

"Deliberate decisions were made under my predecessor to reduce service and increase crowding levels on the transit system," said Tory, blaming former mayor Rob Ford.

"To put it bluntly, we starved our transit system to the breaking point,"

"This will provide real financial relief for families," said Tory about the plan to stop charging kids in that age group.

Tory also spoke of a $95-million investment from the city that will be used to restore bus lines and purchase 50 new buses, among other items.

The mayor also made a Vine video describing the fare increase.

All the above proposals are subject to approval in a budget process.

The mayor made the announcement at Joyce Public School, located near Lawrence Avenue West and Caledonia Road.

The new fare proposals come as the city begins the process of shaping its operating and capital budgets for the year.