Canadian citizen Mohamed Duale was travelling back to Toronto after an academic research trip to Kenya last year when he was pulled aside for secondary screening. He says he'll never forget the words a border agent used when she told him why he was being questioned.

Mohamed Duale can still remember the feeling in the pit of his stomach when a border officer at Toronto's Pearson International Airport stopped and subjected him to a battery of questions as he tried to re-enter Canada last year.

"It's because of where you were born — you're Somalian, right?" the Canadian citizen recalled the Canadian Border Services Agency agent telling him.

It was a moment that Duale, a doctoral student at York University in Toronto, says stopped him in his tracks.

"I was literally frozen ... Being a Black, male, Muslim person with about a dozen CBSA officers alone in front of a departure gate, I'm literally scared," Duale said.

"I never thought that the discrimination would be so overt or verbalized in such clarity. And it's words that I will never forget for as long as I live."

The interaction, which allegedly happened Sept. 2, 2019, is now the subject of a complaint filed against the CBSA and accepted by the Canadian Human Rights Commission in late September.

Representing Duale are the National Council of Canadian Muslims (NCCM) and Mariam Moktar and Sarah Rostom from Goldblatt Partners LLP. They argue the 33-year-old's experience is part of a broader pattern of discrimination by the CBSA and underlines the need for independent oversight of the agency — something that was in Bill C-3 last year, before it died on the order paper when Parliament was prorogued over the summer.

WATCH | Duale on moment CBSA agent allegedly said he was stopped because 'you're Somalian': 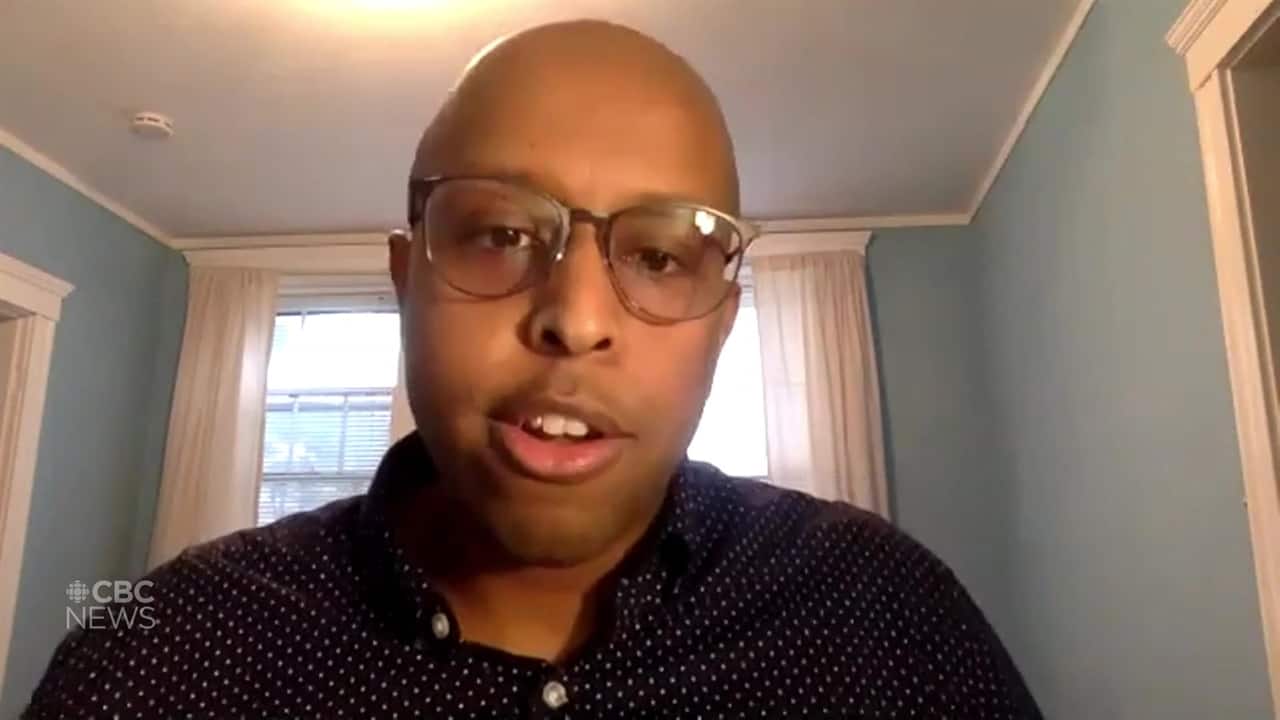 6 days ago
0:33
Mohamed Duale says he will never forget the words of a CBSA officer when he asked why he was repeatedly questioned while re-entering Canada last year. 0:33

'A pattern that is systemic'

"The reality is that discrimination at the border, at the hands of the CBSA, is a pattern that is systemic," said NCCM's chief executive officer Mustafa Farooq.

Farooq also cited a 2019 report by the auditor general that found the agency did not do enough to address harassment and discrimination in the workplace. He said it shows there are problems with how the CBSA treats people both inside and outside the organization.

"That is the culture. That is the problem at the CBSA," said Farooq, adding his organization has received two to three complaints per month about the agency over the last year and a half.

Duale had been travelling back from doing research in a refugee camp in Kenya when he arrived at Pearson airport close to 5 p.m.

In the complaint, Duale says that shortly after disembarking, he was told to proceed to secondary screening — something he'd never been asked to do before. There, he says, a "white female CBSA officer" asked him whether he was really a PhD student, what his dissertation topic was and his central argument.

Although examination may seem unpleasant at times, and the relevance of questions posed by our officers may not be obvious ... they assist in verifying a traveller's declaration.- CBSA

Duale says he explained he had been researching the experiences of refugee youth, but as the questions grew more detailed, he says he told the officer he wasn't obligated to disclose such information to enter his own country.

At that point, he says, the officer put his passport in her pocket and said she wouldn't return it until he sufficiently answered her questions. Duale tried again to explain the purpose of his trip, but added he hadn't written his dissertation yet and hadn't come up with a central argument.

'Interrogated for trying to enter my own country'

According to the complaint, the agent asked why he wanted to do a PhD. Duale responded that he wanted to become an academic and asked for his passport back, to which the agent replied he would need to show additional identification.

After inspecting his driver's licence, he says, the officer "threw the passport" into his hand and that it fell to the ground. As he bent down to pick it up, he says the officer told him, "You look nervous."

"I replied that I was nervous because I was being interrogated for trying to enter my own country," Duale said, asking the officer why he'd been treated this way.

It's at that point that the agent allegedly told him it was because of where he was born, saying he was "Somalian" and adding it was her job to ensure "everyone has the passport that belonged to them."

Duale said he replied that "Somalian" is an offensive characterization of Somali people and that being born somewhere else doesn't make a person any less a citizen. Born in Mogadishu, Duale had been a Canadian citizen for 15 years at the time of the incident.

When Duale tried to file a complaint with the CBSA, he said another officer told him, "Normally, there isn't a problem unless people don't tell the truth."

In October of 2019, the CBSA responded to Duale's complaint, concluding its officers carried out their duties professionally and followed proper procedures.

"You have made strong accusations regarding the comportment and integrity of our officers … The findings of our review do not support the allegations you have made," the letter said.

"Although examination may seem unpleasant at times, and the relevance of questions posed by our officers may not be obvious and may seem intrusive, they assist in verifying a traveller's declaration and purpose for travelling."

Carleton University professor James Milner, who supervised Duale's research in Kenya, called it "the most egregious example of unprofessional behaviour that I've heard in the context of an immigration official here in Canada."

Milner is also the project director for the Local Engagement Refugee Research Network, a team of researchers and practitioners "committed to promoting protection and solutions with and for refugees," according to its website.

"As a white, male, middle-aged Canadian myself, my experiences crossing borders are typically cordial … And so there is clearly a differentiation based on nationality, based on name, which evokes deeper questions about the way that profiling continues to be used in our border control systems."

Immigration lawyer Guidy Mamann said CBSA officers have the full authority to ask any questions they like but believes in many cases the law gives them too much leeway.

"Some of that, in certain circumstances, is appropriate. But I have seen that done in situations where it defies belief."

"Minister Blair remains focused on modernizing policing structures and updating standards regarding use of force, and looks forward to tabling legislation that will strengthen oversight in our agencies and increase public trust," said Blair's press secretary Mary-Liz Power.

Power added that "there is much more work to do to dismantle the systems that perpetuate racism in our country."

CBSA spokesperson Rebecca Purdy told CBC News on Wednesday that it had not received word from the human rights commission of Duale's complaint, but corrected that Thursday to say they had in fact been notified.

When complaints are filed, the CBSA "co-operates fully in the complaints process", Purdy said, adding "the agency is committed to ensuring all travellers are treated fairly", and that "discriminatory behaviour is not tolerated by the CBSA".

The agency also says all complaints received by the CBSA are handled in an efficient, professional and impartial manner.

Meanwhile, Duale, who was at the top of his class before the incident, said the encounter left him depressed and demoralized to the point that he couldn't focus on writing, was sleeping excessively and had to request multiple extensions on deadlines because of anxiety.

"It's hard to put down in a few moments a lifetime of experience being discriminated against as a Black man in Canada … It's been my whole life, really," Duale said.

"It's part of life in Canada."

With files from Nicholas Boisvert