Caroline Mulroney says she may be a political rookie, but will bring “a different kind of experience to Queen’s Park” if she’s elected not only as an MPP, but as leader of Ontario's Progressive Conservatives.

Caroline Mulroney says she may be a political rookie, but will bring "a different kind of experience to Queen's Park" if she's elected not only as an MPP, but as leader of Ontario's Progressive Conservatives.

Mulroney is up against former MPP Christine Elliott and former Toronto city councillor Doug Ford for the party's top post, which is vacant following the resignation of Patrick Brown. Brown stepped down in the wake of sexual misconduct allegations from two women. The allegations have not been proven in court.

"I've been working for 20 years in law and business, I started a charity, and I've been doing that while raising kids," Mulroney, a mother of four, told CBC News on Monday morning.

"I think I bring a different kind of experience to Queen's Park."

Mulroney noted that unlike her two opponents for the leadership, she's been in the thick of the election cycle since last year. She was acclaimed as the PC candidate in the provincial electoral district of York-Simcoe last August.

While the governing Liberals have "lots of legislative experience," she said, "it's gotten us into the mess that we're in." After 15 years of Liberal government, voters are "looking for something different," she said.

"Although people haven't seen me on the floor of a legislature before, it doesn't mean that I don't have the skills and the qualifications to lead," she said. "I've just been doing it behind closed doors." 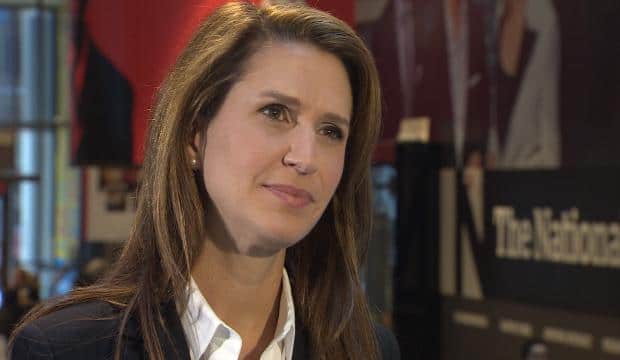 3 years ago
8:43
Caroline Mulroney tells us why she's the best candidate to lead the Ontario PC Party 8:43

Mulroney, daughter of former prime minister Brian Mulroney, is a lawyer who has also worked in finance. Before entering politics, she was vice president of Toronto-based BloombergSen Investment Partners, and previously worked at a venture debt fund.

Mulroney also co-founded the Shoebox Project, a charity that collects and distributes supplies for women living in shelters.

She has the support of fellow PC candidates and current caucus members, she said, and has been out knocking on doors as part of her campaign for the York-Simcoe seat. She is also expected to have an experienced war room: former federal Progressive Conservative cabinet minister Lisa Raitt confirmed to CBC News that she will serve as one of Mulroney's leadership campaign co-chairs.

Asked about specific policy issues, such as the contentious carbon tax, Mulroney said she's "not in favour of taxes" as a conservative. But, she said, if a tax is coming down from the federal government it's likely best for the local government to decide where the money goes.

Asked about the governing Liberals' minimum wage hike, Mulroney reiterated the party's position that it would not roll it back.

"People deserve to earn a living wage. And I believe that," Mulroney said. "I just note that they've been in government for a long time, and the Liberals decided this was essential for Ontarians six months before an election."

She would "scrap cap and trade," she said, but noted it may take some time to dismantle the program, and she would look at how to cut hydro rates.

But on the issues of rent control or the recent introduction of OHIP+, which covers prescription medications for anyone in the province under age 25, Mulroney said she will wait to see how the initiatives are costed in the next provincial budget "before we start making any decisions about what we're cutting."

On Sunday, Mulroney ended days of speculation about her leadership candidacy with two tweets, one with a Super Bowl theme in which she simply said, "It's game time."

On Monday, Mulroney said she's committed to "running a positive, unifying campaign," even if she faces criticism from her opponents for the time she has spent outside the country. Mulroney has degrees from both Harvard and New York University.

"I don't see this as an opportunity to throw punches at anybody. I have lived in Ontario most of my life. I have lived elsewhere. And what it's taught me is that this is the best place to live," Mulroney said.

Hours earlier, one of her potential Liberal opponents in York-Simcoe, Loralea Carruthers, issued a statement calling Mulroney a "parachute candidate" who is "taking local voters for granted."

"The announcement tonight that she will seek to lead the Conservative Party before earning a single local vote is presumptuous, and I believe the people of York–Simcoe will see through it," Carruthers, a business professional and York Region District School Board trustee, said in the statement issued late Sunday.

Carruthers, who is seeking the Liberal nomination, noted she has lived in the riding "for decades" and has long worked on community issues.

"Serving my home riding is my top priority," Carruthers said. "There's too much to be done locally to have a candidate distracted and using our riding as a stepping stone to higher office."

She said she needs to "look closely at all of the facts" before making any decisions.

"We've got to look into it. Things have happened so quickly and we can't rush to judgment on anything," she said. "But the key thing is that we understand that women who've experienced these issues feel safe coming forward."

Asked about comments a female Doug Ford supporter made to a CBC News reporter over the weekend about not wanting a female premier, Mulroney replied: