Toronto born indie filmmaker says directing Game of Thrones season 7 premiere and finale was unlike anything he's ever done.

This article contains spoilers about the Game of Thrones season 7 finale entitled: The Dragon and the Wolf.

The Night King breached the Wall, Jon and Dany become more than strategic allies and Littlefinger is finally punished at the hands of the Stark sisters. A lot happened in the season finale of HBO's blockbuster series and Canadian director Jeremy Podeswa orchestrated every minute.

"I love the scripts … it's a great and collaborative process. It's awesome, but it's also an awesome responsibility," said Podeswa in an interview with CBC News from his California home.

"It's really exciting. I knew going in it was going to be a big deal, now that the [episodes] have aired; now it belongs to the world. Now I'm reminded there are going to be 300 million people watching it and the fans have so much invested and they are really vocal about what they think."

No stranger to Game of Thrones, Podeswa directed four episodes before season 7, including the first two of season 6, where Jon Snow (Kit Harrington) is resurrected after being knifed in the heart by members of the Night's Watch. He also directed the scene where Arya Stark (played by Maisie Williams) wipes out every male in the Frey family at the same time.

"That's exciting, when you cut something in the cutting room and think 'Oh my God, people are just going to go nuts when they see this.' I love that," said Podeswa. 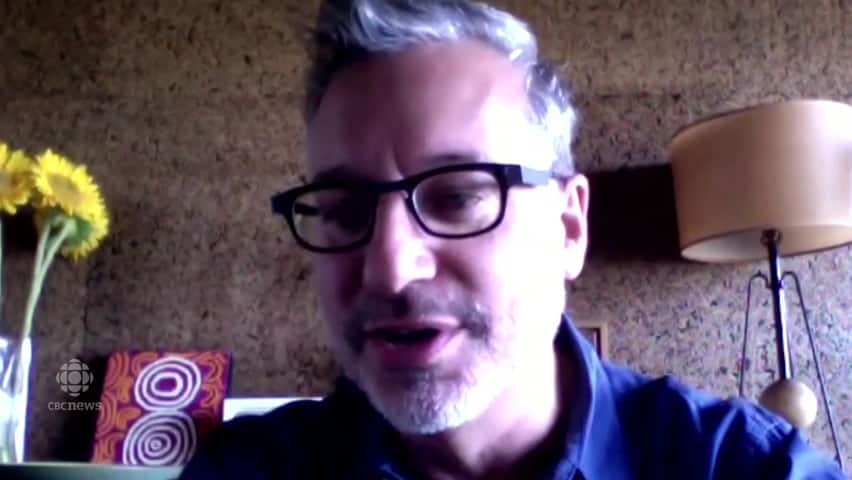 Game of Thrones director talks about that epic season 7 finale

4 years ago
0:26
Toronto's Jeremy Podeswa gives CBC News the details beyond his vision for The Dragon and the Wolf, the season finale that closed this year's blockbuster fantasy series Game of Thrones. 0:26

Game of Thrones has been called the best series on television and the ratings reflect its outrageous popularity.

More than 10 million people watched the season 7 premiere on the night it first aired, making it the most-watched premiere in HBO history.

"I was very happy that the premiere was so well received — it was record breaking numbers as the whole season has been and the response has been really amazing," said Podeswa.

"Even though I've done this show four times before the ones I did this season, it feels like the response has been so ridiculously extravagant it's unlike anything I've every done really."

Born in Toronto, Podeswa graduated from Ryerson University's film school. He began his career as an independent filmmaker with the films Eclipse (1994) and The Five Senses (1999).

Podeswa went on to direct episodes of a number of hit television series including The Walking Dead, Boardwalk Empire and True Blood before directing Game of Thrones.

Podeswa won't be directing any of the six episodes that will make up season 8, the final season of the series. He insists he doesn't even know who will end up on the Iron Throne in the end or if there will even be an Iron throne to claim.

"I have no idea. Any of [the cast] could be amazing on the Iron Throne. I think the story could end in so many different ways that would be satisfying to an audience," said Podeswa, who has opted not to learn the details. "I'm excited to see the last season and find out that way."

The final season of Game of Thrones is set to begin filming in October, with episodes expected on HBO as early as July 2018.