Patrick Brown may not be PC party leader any longer but he's making news on the campaign trail. With 21 days to go, here's what you need to know about the Ontario election.

Plus Patrick Brown isn't a party leader, but he's still making waves on the campaign trail

Latest from the campaign 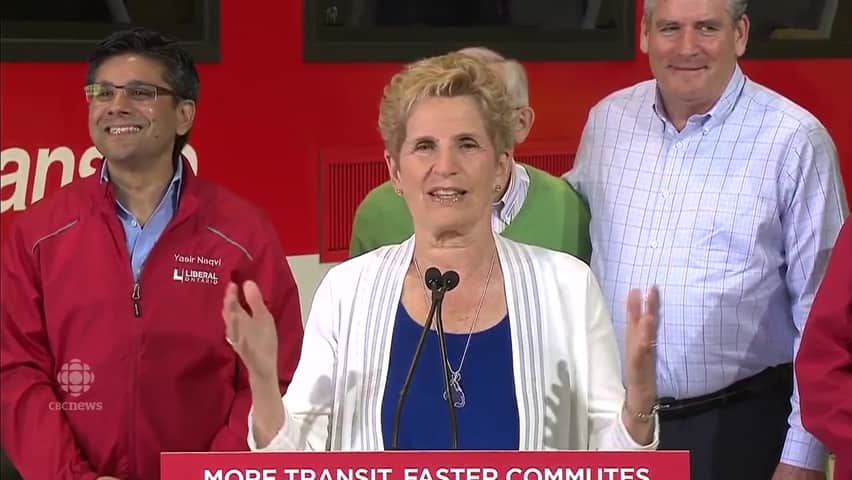 3 years ago
0:17
The Liberal leader did not speculate if Patrick Brown's book, Take Down: The Political Assassination of Patrick Brown, would name those involved in what he believes was a wicked plot to kill his political career. Kathleen Wynne, instead, noted on Thursday that she had only seen the book's cover. 0:17

Kathleen Wynne may be running against Doug Ford and Andrea Horwath but on Thursday she was asked about former PC Leader Patrick Brown, who is now writing about what he calls his political "assassination" after being accused of sexual misconduct.

Wynne told reporters she had no idea what will be in the book.

"I've only seen the cover of it, and I have no idea what will be in between the covers," she said.

PC Leader Doug Ford may not have a platform yet but he does have a campaign song. It's called For the People and it's being played at his rallies and in his campaign ads. His team has even made a shortened ringtone version of it.

The tune features lyrics like "gotta fight, for what's right, for the people" and "bring us hope, bring us change, for the people." The party wouldn't confirm who wrote the song or how much it cost, saying only that it was written by a Toronto composer.

Ford spokesperson Melissa Lantsman said in an email they put out the song because people want change.

But campaign songs aren't anything new in Ontario politics. Back in the 1995 provincial election, then premier Bob Rae helped put together an original jingle for the NDP and used it as an intro to every speech. He ended up losing.

Voters in northeastern Ontario hope the new riding of Mushkegowuk-James Bay gives them a new voice at Queen's Park and a greater presence on the wider political landscape in the province. Created from the northern portion of the Timmins-James Bay riding in 2017, the new constituency covers a wide swath of the region from just north of Cochrane and Timmins all the way up the James Bay coast to Hudson Bay. It's about twice the size of the Maritimes with a population just over 30,000 people, which is roughly 60 per cent francophone and 27 per cent Indigenous.

Like much of northern Ontario, voters in this new riding have leaned heavily toward the NDP in past provincial elections. Key issues to people who live in the region are the high cost of hydro, resource development like mining, jobs, funding for social services and gas prices. While many of their priorities are similar to those of voters in the south, residents in this part of northern Ontario have long felt alienated from the decision-making and economic hub of the province, so they're hopeful a new riding will put a new spotlight on their issues.

There are five declared candidates running for the new seat at Queen's Park: Gaëtan Baillargeon for the Liberals, André Robichaud for the Progressive Conservatives, Guy Bourgouin for the NDP, Vanda Marshall for the Libertarians and Jacques Joseph Ouellette for the Northern Ontario Party.