Does Doug Ford know how to pass a bill?

With the first full day of campaigning done, the real race starts. This is The Campaigner, meant to keep political rookies and junkies alike informed at what's going on in the election campaign.

NDP inch past Liberals in polls, while N'Sync gets some love

With the first full day of campaigning done, the real race starts. There are signs of movement — and it's not just the whistle stops the leaders are making. The NDP has actually inched past the Liberals for the first time in the CBC's poll tracker.

Here's where we are on day two. 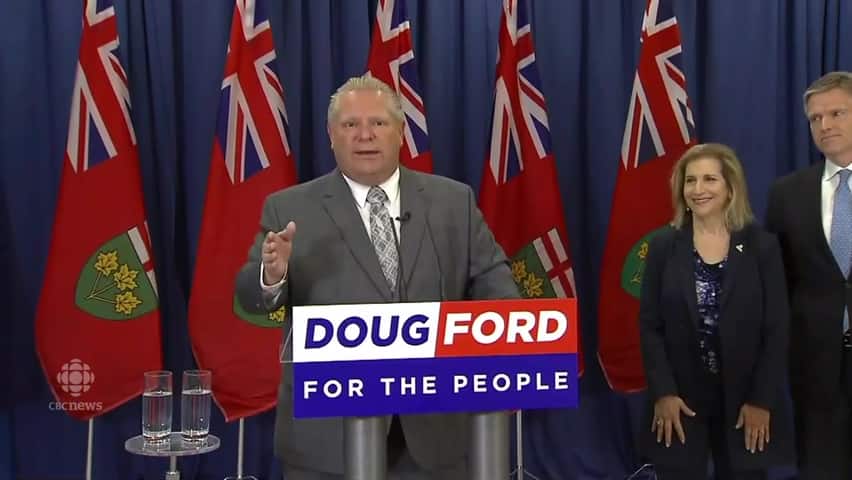 3 years agoVideo
0:40
PC Leader Doug Ford was asked how a bill is passed during a press conference, but he did not answer it. 0:40

That's the question he was asked while campaigning Wednesday. He didn't give an answer, instead accusing the reporter of asking a "gotcha question" before quickly segueing.

The youth wing of the NDP have taken a page from the federal Greens and started using N'Sync references in their online campaigning.

While the Greens opted to play on "it's gonna be May" during the 2015 federal election (a nod to their leader), the young NDPers are showcasing Lance Bass's frosted tips and "bye bye bye."

It is not a coincidence that Liberal Leader Kathleen Wynne kicked off her official campaign in this densely populated and diverse area in the west-end of Toronto. Parkdale-High Park, held federally by the Liberals and provincially by the NDP until recently, is a riding in which Wynne's Liberals see an opportunity to make gains in the critically important GTA.

Former NDP MPP Cheri DiNovo represented the riding in the legislature for 11 years. In 2014, DiNovo barely squeaked out victory with 40.73 per cent share of the vote. Her Liberal challenger took 39.57 per cent of the vote.

DiNovo retired from politics at the end of 2017, leaving the seat vacant. Bhutila Karpoche, who has worked hand-in-hand with DiNovo for eight years, is the NDP candidate. Nadia Guerrera, a Catholic teachers' union representative, is running beneath the Liberal banner.

The Progressive Conservatives under Doug Ford continue to hold a commanding lead in the polls and are well-positioned to secure a majority government, according to this data.  Get the full breakdown.