Advanced technology is helping Toronto police learn more about the history of the guns they seize from city streets, but wary criminals are paying attention and taking steps to thwart that process.

Bullets, fragments and casings linked to guns and prior crimes 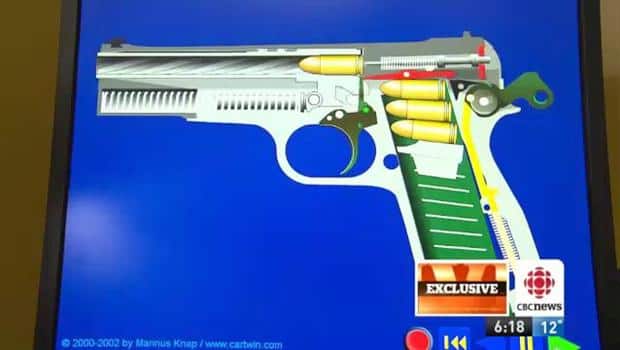 Advanced technology is helping Toronto police learn more about the history of the guns they seize from city streets, but wary criminals are paying attention and taking steps to thwart that process.

How this technology works

See how police can match guns, bullets and casings.

Police say that when they retrieve bullets, fragments or shell casings from crime scenes, investigators can tell if they have come from a firearm that they have seen before. They do this using the Integrated Ballistics Identification System, a Canadian-designed technology that analyzes the unique, three-dimensional markings of the projectiles that are left behind when a gun is fired.

Robyn Thomas, a forensic firearms technician at Ontario's Centre of Forensic Sciences, told CBC News that guns are imprinted with characteristic markings at their point of manufacture.

"Each one is unique," she said.

These unique markings make an impression on the bullets they fire, which is why the IBIS technology can help link one to the other.

Toronto police now routinely test all bullets, fragments and shell casings they recover. Through IBIS, that information can then be compared to thousands of other pieces of evidence, often within minutes.

Police say IBIS technology has so far helped draw hundreds of links to specific weapons and prior shootings in Toronto.

One high-profile case the IBIS technology was used in was the investigation into the deadly shooting outside the Duke of York tavern in Toronto’s Leslieville neighbourhood.

Thirteen rounds were fired on the evening of Oct. 25, 2008, leaving a young woman dead and four other people injured.

Within three days of the shooting, police had issued a warrant and the suspect turned himself in.

But investigators didn’t find the gun for weeks, until it turned up in an unrelated investigation.

"When the gun came in, it was recovered in a search warrant that was involved in a robbery," said Det. Mike Grierson, a guns and gangs investigator in Toronto.

When it was then analyzed using the IBIS technology, it became clear that the gun had been used in the Duke of York shooting, as well as a separate shooting in northwest Toronto.

Grierson said it’s this type of information that police never had access to in the past, which previously left investigators facing gaps that would otherwise be hard to fill.

"Pre-IBIS, I’m not too sure how they would even link anything up that way," Grierson said.

At trial, Kyle Weese, the man accused in the Duke of York shooting was convicted of the second-degree murder of Bailey Zaveda, as well as four counts of aggravated assault. He is now serving a life sentence.

Robert Walsh, the CEO of Forensic Technology, told CBC News it is now being used in six Canadian laboratories, as well as in dozens of countries around the world.

"We don't have a huge gun-crime problem, compared to our neighbours and other places around the world," Walsh said in a recent interview.

IBIS technology is used by dozens of police forces in the United States, which remains the company’s largest market to date. Walsh said the IBIS system has helped link guns with more than 100,000 crimes in that country.

That success has also been noticed by the people firing the guns that the technology helps identify.

And police say that in some cases individuals have taken countermeasures at crime scenes, by picking up spent shell casings to prevent them from being analyzed.

"We've seen that in some places," said Walsh, who noted the behaviour was first noticed the eastern United States.

In Toronto, police admit that criminals have been known to "police their brass," or pick up the projectiles left behind at crime scenes.

"I think the criminals have learned through the court system and word of mouth with each other that IBIS exists and it’s able to link up crimes to other crimes," said Grierson.

Grierson said if a so-called "dirty gun" has been used in more than one shooting, it may motivate an individual to pick up the evidence that could help police identify that weapon’s history in future.

With files from the CBC's Nazim Baksh and John Lancaster