Ontario budget 2017: Balanced books for Ontario, and free drugs for those 24 and younger

The Ontario government is celebrating getting the books back to balance with significant investments in health care, including a youth pharmacare program, as detailed in the spring budget unveiled Thursday in Toronto.

The Ontario government is celebrating getting the books back to balance with significant investments in health care, including a youth pharmacare program, as detailed in the spring budget unveiled Thursday in Toronto.

The governing Liberals have fulfilled their pledge to return to black ink by 2017-18. The budget forecasts a deficit of $1.5 billion for 2016-17 before forecasting three straight years of balanced books beginning in 2017-18, all due to a booming economy that's bringing higher than expected revenue into government coffers.

That includes more than $3 billion from the provincial land-transfer tax in the coming year alone, up 48 per cent in just two years, as the province's real-estate markets keep getting hotter.

Corporate and personal income tax revenue is also up from projections in the last budget.

"Balancing the books has never been an end in and of itself," Finance Minister Charles Sousa told reporters at the budget lock-up for media on Thursday afternoon.

"Balancing, however, allows us to make these new investments, investments that will make impacts on people's lives."

While the document doesn't contain a grab bag of goodies for voters a year out from the next election, the pharmacare program is a significant expenditure — a "first of its kind in Canada," according to Sousa. It will help ease the burden of health-care costs on families, and is part of a slate of new spending on health care.

The program, dubbed "OHIP+: Children and Youth Pharmacare", will make prescription drugs free for all youths aged 24 and under, regardless of family income or private insurance coverage.

The program will cover the complete costs of about 4,400 medications currently covered under the Ontario Drug Benefit program, which provides prescription drug coverage to more than 2.3 million seniors and about 900,000 people receiving social assistance.

The new program, which the government estimates will cost $465 million per year, will come into effect on Jan. 1, 2018. Some four million children will be covered, including those already covered under the ODB.

Health-care spending gets a boost

The budget also indicated that the abortion pill, Mifegymiso, will now be publicly funded, with Sousa noting that the government is "trying to provide women with choice, and with a safe choice."

Overall, the province is pledging an additional $7 billion over the next three years for measures designed to boost access to health care, reduce wait times and "enhance patient experience."

There's $1.3 billion to reduce wait times for specialists, as well as for procedures such as knee and hip replacements and cataract surgery, and for expanding access to home-based and community care, such as in-home nursing and personal support workers.

Hospital funding is going up by $518 million — a jump of 3 per cent — to "support vital services, keep wait times low, and maintain access to elective surgeries," the budget reads.

Some $9 billion over 10 years has also been earmarked for new hospital projects across the province, including new facilities in Niagara and Windsor.

The governing Liberals are also launching their new dementia strategy, at a cost of more than $100 million, to improve and better co-ordinate services for patients and their caregivers.

But there are no measures designed to directly address the problem of patients waiting for days on stretchers in hospital hallways as they wait for beds.

When asked about this, Sousa pointed to the overall boost in health-care funding that would help alleviate the pressures on the system.

Ontario Progressive Conservative Leader Patrick Brown called the budget "an insult to the hard-working people of Ontario," questioning how the Liberals got to balance while also letting the debt to balloon to more than $300 billion.

Annual interest payments on that debt are now at more than $11 billion.

"This budget is a patchwork attempt by a desperate government to fix the mess they made before the next election," Brown told reporters.

Brown accused the Liberals of running a $5 billion operational deficit, saying they are including one-time revenue sources to bring the books to balance. This include money from the sale of government buildings and Hydro One, $2 billion in cap-and-trade revenue that the Liberals had already accounted for, $1.5 billion in new federal funding and counting $500 million in pension assets as revenue.

Asked what he would cut if he was premier in order to achieve balance, he said he would first commission a "value audit" to identify waste or mismanagement in government.

Asked specifically about whether the PCs would introduce a pharmacare program of their own, Brown would only say he would bring in a drug access plan "that is fair," and "reaches those that need it."

NDP Leader Andrea Horwath, who proposed a universal pharmacare program in recent weeks that would cover all Ontarians but start with just 125 medications, called the Liberal plan a "meagre measure."

"It smells a bit like a back-of-the-napkin plan," she said of the youth pharmacare plan.

She expressed disappointment that the budget did not contain other NDP proposals, including boosting the minimum wage to $15.

"This Liberal budget offers no real improvements to transit," she added, "or efforts to make it more affordable for students and families."

Education is the other big winner in this year's budget, with the government aiming to reduce class sizes for young students.

Adding to its previous pledge of $16 billion over 10 years to build new schools in high-growth areas, the government has committed an additional $1.2 billion in funding for repairs and "renewal" over the next two years. This money is largely for building repairs, as well as refurbishing yards and sports fields.

New changes to OSAP include boosting the minimum income at which graduates have to begin repaying their loan from $25,000 to $35,000. That change will take effect in 2018.

And a new Career Kick-Start program, with a price tag of $190 million over three years, offers high school and post-secondary students co-op programs and other training opportunities designed to prepare them for the workforce.

The budget includes numerous measures that were announced in the weeks leading up to its unveiling, including 100,000 additional child-care spaces; measures to rein in the hot housing activity that's spread from Toronto to markets throughout the province; and a plan to reduce hydro rates by up to 25 per cent.

There is also little new on transit, although the government has increased the previously announced $160 billion over 12 year infrastructure fund by $30 billion and tacked on another year. There were few details about where that additional money is going, except that it will be absorbed into the funding for new hospitals, as well as capital projects for schools. 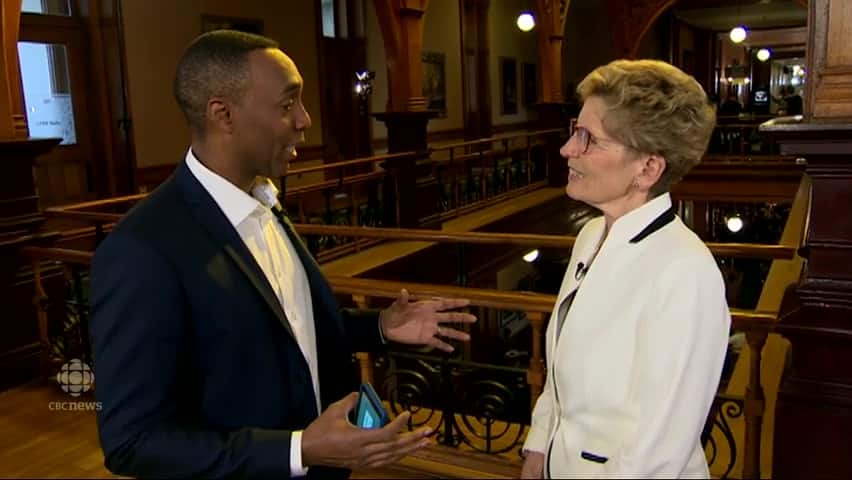 There's also little new that will immediately affect Ontarians' pocketbooks, except those who smoke. The Liberals are increasing the tax on a carton of cigarettes by $10 over three years, starting with a $2 jump that takes effect on Friday.

The government will also amend legislation to allow municipalities to bring in a hotel tax, which the City of Toronto has been asking to do. Asked whether that will allow them to bring in a tax on Airbnb units, the finance minister said that would be up to each municipality.

There's also little for affordable housing, other than a pilot project in which the province will donate land in Toronto that's worth between $75 million and $100 million to be devoted to the construction of 2,000 units.