Patrick Brown has entered the race for leader of the Ontario Progressive Conservatives, just weeks after resigning from the position due to allegations of sexual misconduct. 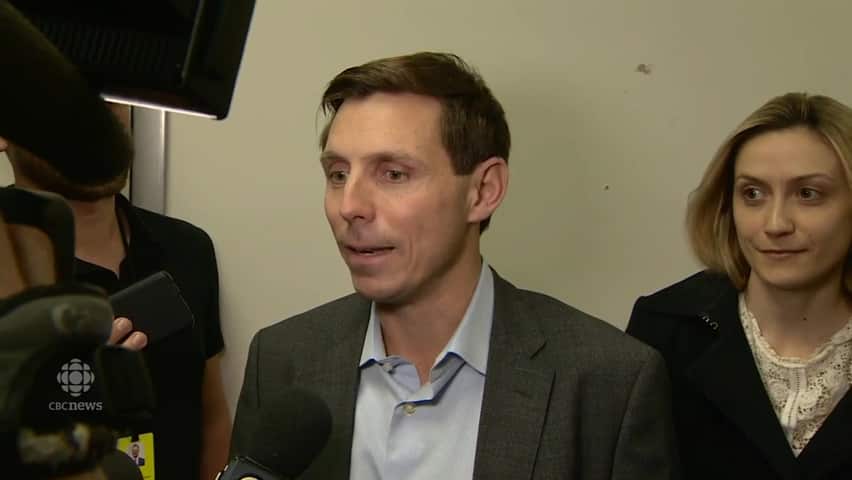 'I filed my papers': Patrick Brown wants back in Ont. PC leadership race

3 years ago
0:52
Patrick Brown says he filed his papers for the Ontario PC leadership race and says he was given 'strength to carry on' from his supporters. 0:52

Patrick Brown has entered the race for leader of the Ontario Progressive Conservatives, just weeks after resigning from the position due to allegations of sexual misconduct.

Brown was seen dropping off paperwork at party headquarters on Friday afternoon, around two hours before the 5 p.m. ET deadline, and made his announcement to reporters later in the afternoon.

"This isn't about me, this isn't about the PC Party, this is about making sure that on June 7th, the Progressive Conservative Party is successful," Brown said, referring to the upcoming provincial election.

Brown also spoke about his experiences since resigning.

"What I've gone through in the last three weeks, I wouldn't wish on my worst enemy. It has been absolutely horrific," Brown said.

"What I can tell you is in that period, I found strength. I found strength by the support of my family and friends, from the party faithful around the province, who reached out to me and saying we know what you are about."

Brown is listed as a "leadership contestant" on the Elections Ontario website, but to run, he will also need to be approved by a party committee.

Brown's entry in the race came just hours after interim leader Vic Fedeli expelled him from the party caucus. Despite his removal, under the party's leadership rules Brown is eligible to run, provided his party membership is not revoked.

There is no indication that his membership had been revoked, and Brown remains an MPP for Simcoe North.

"Mr. Patrick Brown has submitted his paperwork to run for the leadership of the Ontario PC Party," Badwal said. "Mr. Brown's application will follow the same due process in the same manner as the other four declared candidates."

The former party leader has staunchly denied the allegations of sexual misconduct, which were brought forward by two women in late January.

This week, CBC News reported new information that appeared to contradict several elements of the original allegations, which were first reported by CTV News.

Tanya Granic Allen, Christine Elliott, Doug Ford and Caroline Mulroney are all vying to replace Brown in an abbreviated leadership race ahead of the June election, when the Tories hope to unseat Premier Kathleen Wynne and her long-ruling Liberals.

One of his rivals criticized Brown's candidacy as a "distraction."

"Defeating Kathleen Wynne should be our only objective. Patrick Brown should focus on clearing his name," Ford said in a statement.

"The Ontario PC Party is about more than any one person. This is a distraction, Ontario deserves better."

Mulroney said on Twitter the election shouldn't be a place for Brown to clear his name.

Brown told the media he believes his name has already been cleared, adding that the other candidates have been reaching out for his support.

"I think every other leadership candidate I know, certainly the main ones, have been calling every day trying to reach out for my support," he said.

"I think the reason they have is they know that, frankly, there is a groundswell of support in the membership for the project I have been working on to get this province back on track."

Brown's presence in the race is "totally unprecedented," according to Jaime Watt, chairman of the public relations company Navigator.

"I don't think anyone can remember such a thing happening," Watt told CBC Toronto.

"I think it calls into question the seriousness of the entire race, and I think it has turned into a bit of a shitshow frankly, and I think it actually harms all the candidates at a very important time in Ontario's history," he said.

The PCs will pick their new leader on March 10.