A young boy suffered severe burns to his feet after wandering away from a splash pad and stepping on hot metal. WARNING: This story contains a graphic image. 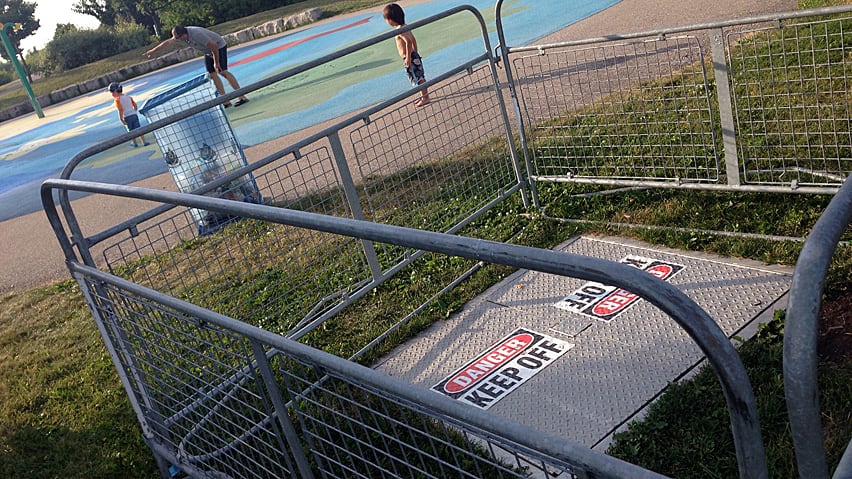 6 years ago
2:26
1-year-old being treated for second degree burns after stepping on a metal surface next to a Georgetown, Ont. splash pad 2:26

A young boy suffered severe burns to his feet after wandering away from a splash pad and stepping on hot metal.

Dave and Jill Pelvin say their one-year-old son, Greyson, was playing with his two siblings and friends in a splash park in Georgetown, a community in Halton Hills near Toronto, on Monday when he stepped on ground-level metal doors and suffered second-degree burns. The boy also suffered a minor burn to his right hand in the process.

Greyson was raced to hospital and remains at Toronto's Hospital for Sick Children, where he is being treated with painkillers.

The doors, which have two "Danger Keep Off" signs on them, are only steps away from a splash pad meant for children. They have since been cordoned off with metal gates.

Both of the boy's parents are distraught about the incident.

"I don't know when the nightmares stop ... things could have gone so differently yesterday," Jill Pelvin said.

"It is so easy for it to happen. Anyone who steps on it will get serious burns," Dave Pelvin said.

Dave Pelvin posted an image of his son's injuries on Facebook as a warning to other parents.

Specialists are set to re-examine Greyson's injuries Wednesday to see if he will require a skin graft to repair the soles of his feet, his family said.

Cindy Bodrug, of the Town of Halton Hills, said the municipality is investigating the incident.