A Toronto-area dog trainer and her intrepid border collie named Rev are hoping their tricks will be the fan favourite in a popular canine talent show.

A Toronto-area dog trainer and her intrepid border collie named Rev are hoping their tricks will be the fan favourite in a popular canine talent show.

They're finalists in the World's Most Amazing Dog competition that airs on Facebook Watch. The winner will be announced on Thursday.

"I wasn't going to enter the contest in the first place. It's just wild how we got this far," said Maddisen Phelan, owner of Wizard Of Paws, a dog training service in Georgetown, Ont.

Dogs featured in the eight-episode series showcase their best tricks to a panel of two judges.

Dressed in a red and gold-coloured sequin vest, Rev performed a range of tricks during the season finale. The pair shared a dance, Rev weaved between Phelan's legs, walked in sync on top of her feet and balanced on all fours on top of her legs like an acroyoga pose.

"You really have to work together and try and be calm or his performance won't go as well," Phelan told CBC Toronto. 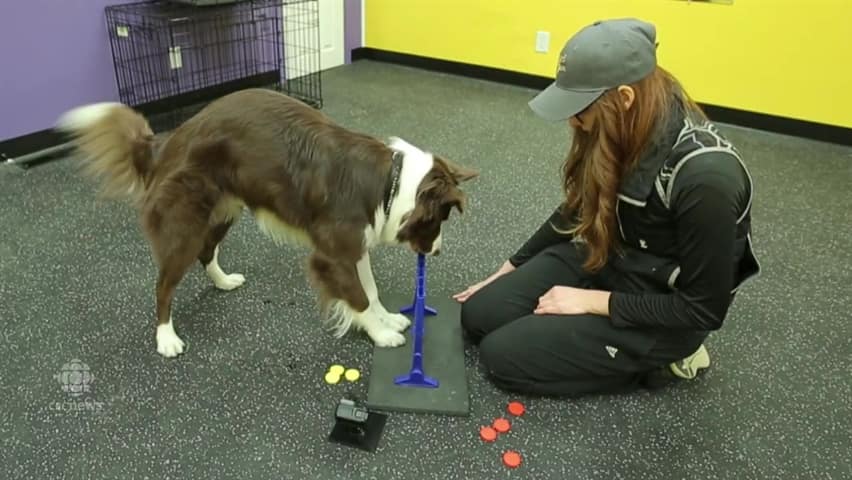 2 years agoVideo
3:10
Rev and his owner Maddisen Phelan stunned the judges of the World's Most Amazing Dog with the board game trick. 3:10

Their act, done in under one minute, turned the judges' heads. It was scored based on difficulty, personality and wow factor.

"His personality was definitely part of the judging criteria and I definitely think he has the personality because he's quite comical and he acts almost like a human," Phelan said as Rev perched upright on his back paws.

Canine contestants are competing for the title and $100,000 US. The winner is decided by the audience, who vote for their favourite.

Five-year-old Rev's time on the show, however, wasn't always on the ball.

The team was eliminated during the first episode, but later saved and allowed to compete in the second semifinal.

Rev earned his spot on the California-based reality show by playing Connect Four, a classic board game that requires players to line up a row of coloured discs by dropping them into slots of a vertical, cut-out grid.

"I taught him to put a toonie, or a coin, in a piggy bank and so that's where that kind of came from," said Phelan.

"It was a nice calm trick because sometimes he just gets too crazy … This is a good calming one for him."

Phelan adopted Rev when he was just 10 weeks old.

"I wanted a super-fast agility dog," she said. "He has definitely lived up to that."

Phelan says the team brought their A-game to the finals.

"No matter the outcome, though, I'm still grateful for the whole experience. It's definitely something I'll look back to for years to come."