The door has officially been shut on an open roof at Toronto's Rogers Centre today for the key MLB playoff game between the Blue Jays and Texas Rangers, despite a vigorous online campaign by Jays fans. 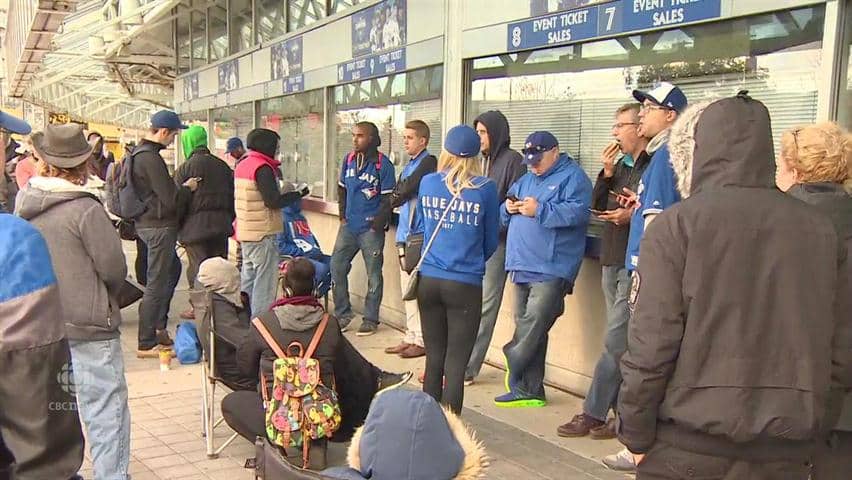 5 years agoVideo
0:32
Some dedicated Blue Jays fans lined up really early this morning to snag last minute tickets to Game 5 of the ALDS against the Texas Rangers. 0:32

The door has officially been shut on an open roof at Toronto's Rogers Centre today for the key MLB playoff game between the Blue Jays and the Texas Rangers.

The roof will be shut for the deciding Game 5 of the American League Division Series, despite an online campaign by Toronto fans that includes a trending Open the Dome hashtag and an online petition with more than 20,000 signatures.

Confirmation of the closure came from Stephen Brooks, the Jays' senior vice-president of business operations, while he was answering questions from fans on Twitter last night.

Jays fans have been calling for an open dome ever since the team was guaranteed to be back for more post-season play in Toronto. The hashtag took Twitter by storm, despite the fact Major League Baseball's ground rules are clear about when the roof can be open.

The change.org petition soon followed, as fans banded together to send a letter to MLB commissioner Rob Manfred.

Unfortunately, it was all for naught.

Brooks said today's forecast (a high of 14 C in Toronto) and the roof's mechanics are behind the closure.

Apparently the mechanism that closes the roof could fail in cooler weather, and Brooks said the stadium has no drainage if it does and the rain starts.

But that reasoning isn't enough for some Jays fans, because the team's regular-season record shows it wins more game when the dome is open.

The fifth and final showdown between Texas and Toronto kicks off at 4:07 p.m. ET with Marcus Stroman on the hill as they try to knock out the Rangers, who will counter with left-handed pitcher Cole Hamels.

The winner will advance to the AL Championship Series against either the Houston Astros or the Kansas City Royals — currently deadlocked at 2-2 in their series, while the loser can kiss their World Series dreams goodbye.