The Toronto fire department says it's highly unlikely any of the belongings inside a burning four-storey self-storage facility will be salvageable after the five-alarm blaze, which has been burning since early Monday morning. 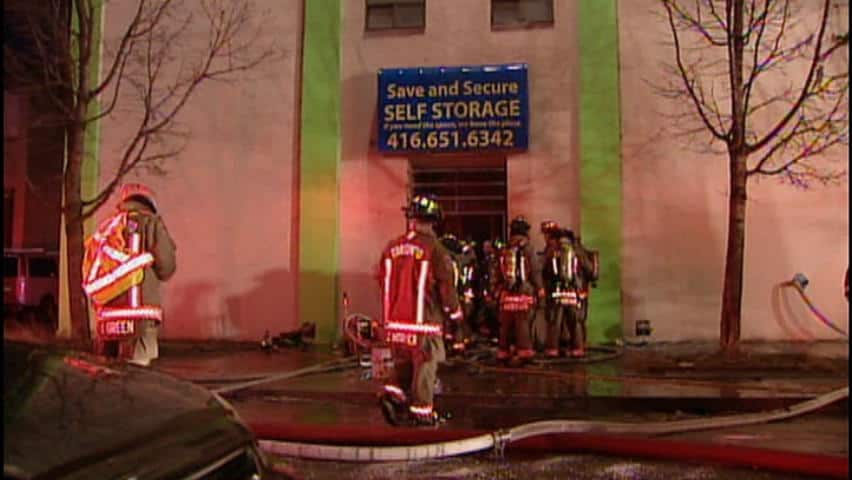 9 years ago
3:33
A large fire at a Toronto storage facility destroyed the belongings inside and injured one firefighter, Jeff Semple reports. 3:33

The Toronto fire department says it's highly unlikely any of the belongings inside a burning four-storey self-storage facility will be salvageable after the five-alarm blaze, which has been burning since early Monday morning.

The blaze forced the evacuation of nearby schools and townhouses, delayed trains and caused minor injuries to one firefighter who fell through a floor inside the building.

Emergency Medical Services said the firefighter, who fell through the floor around 2:30 p.m., had minor injuries. He left the building under his own power.

The fire, which started as a two-alarm blaze but grew to five alarms at its peak, gutted the building in Toronto's west end, sending smoke plumes over an entire neighbourhood.  Firefighters responded to the blaze at 6:13 a.m. Monday at Save and Secure Self Storage located at 97 Pelham Ave., near Dundas Street West and Dupont Street.

"We're not calling the fire under control at this point," he said.

In the early evening, smoke could still be seen wafting from the upper windows.

Fire crews had been concerned the building could collapse, but McCoy said that was no longer an issue. He said it was largely the contents of the storage shed that had burned, not the building.

There was a sprinkler system in the building but fire crews haven't been able to determine how well it worked, he said.

The building contained possessions such as tires, appliances and furniture, McCoy said. Anything not damaged by fire would be damaged by water, McCoy said.

Send us your news

If you or anyone you know has items at Save and Secure Self Storage, CBC Toronto would like to hear from you. Click here to contact us.

Firefighters will be there throughout the night and may go back into the building when the visibility improves, he said.

Schools in the area, which were evacuated of their own accord, should be fine Tuesday, he said, though he wasn't sure when people in the townhouses across the street would be allowed to return.

CBC reporter Genevieve Tomney said there were no reports of anyone falling ill in the homes, despite the thick smoke.

Saint Josaphat Catholic School was evacuated before students ever arrived, with the children rerouted to another school.

"The building is safe and secure, but the neighbourhood is kind of smelly," principal Lucy Dyczkowsky said.

Earlier in the day, the fire forced firefighters to pull back from the blaze as flames could be seen shooting from the windows.

CBC's Trevor Dunn was at the scene and said the fire filled the sky with billowing plumes of smoke.

There is a rail line directly beside the building and trains, including GO commuter trains, were unable to get through in the morning. There were reported delays of up to an hour as firefighters had to drag their hoses across the tracks.

By 2 p.m., fire crews were working to remove the hoses so GO service could return to normal in time for the busy afternoon commute.

There was no word on what might have caused the fire.