Toronto Hydro found rainwater had leaked into the hydro vault that exploded beneath the heart of the city's business district as thousands of employees were heading home for the day. 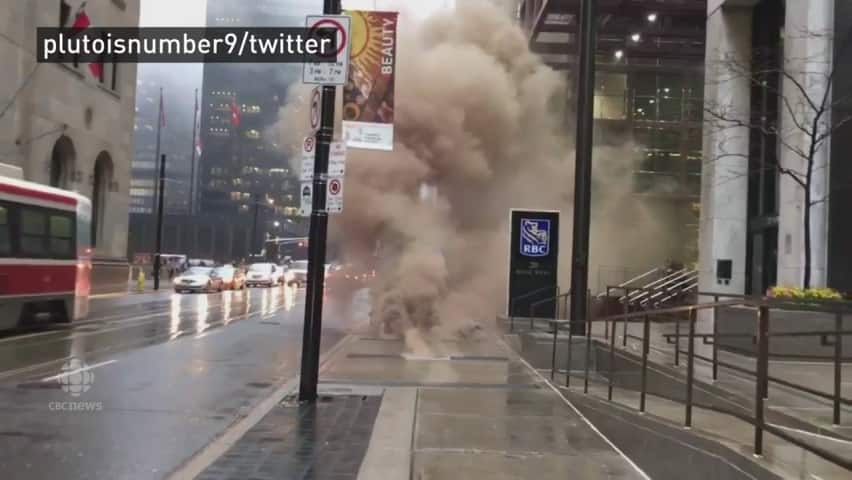 Explosion at King and Bay

4 years agoVideo
0:23
Toronto's fire chief says an explosion at King and Bay was caused by a hydro vault fire. 0:23

Toronto Hydro found rainwater had leaked into the hydro vault that exploded beneath the heart of the city's business district just as thousands of employees were heading home for the day.

The utility has not yet confirmed whether the water itself was responsible for the blown vault, but Toronto Fire Services Platoon Chief Kevin Shaw said that crews began pumping it out around 9:15 p.m.

"It's only a matter of time before the hydro crews are going to enter the vault and see the extent of the damage."

King Street Update: Crews are pumping water and drying equipment before being able to access and begin repairs in the vault. <a href="https://t.co/RSA8kynCPI">pic.twitter.com/RSA8kynCPI</a>

Plumes of brown and black smoke poured from grates outside Scotia Plaza and the Royal Bank of Canada building and sparked shouts from those on the street.

No one was injured in the blast, which Toronto Fire Services said was connected to a vault. The vault contains high-voltage electrical equipment.

Police and fire crews emptied the PATH system and had people exit 20 King St. W., which had its power knocked out during the fire.

After that, firefighters were able to contain the blaze within an hour, Shaw said.

"It's energized, electrical equipment that's in the vault, it overheats, starts melting down ... so that's where you're hearing the crackle and the popping," Shaw told reporters around 6:45 p.m. "There [were] visible flames out of there probably a half hour ago, but we feel that it's definitely under control now."

Toronto Hydro spokesperson Tori Gass said around 8:30 p.m. it would be some time before inspectors could confirm the cause.

"It's going to be quite messy down there, quite toxic," she said. "I would say we're not going to have answers quickly, unfortunately."

Gass couldn't say when the hydro vault was last inspected. Initially, CBC cited Gass as saying the vaults were inspected every year. Toronto Hydro later clarified that while teams are continuously inspecting vaults, each individual vault must be inspected at least once every three years.

She noted that there are "aging assets" in the downtown core. While Gass couldn't say how old the affected electrical vault was, she said that would be part of the investigation.

Police officers blocked off King and Bay, but despite their warning, many people stayed close enough to document the chaos.

Mike Anderson had been walking home from work when he first felt the explosion echo beneath him.

Anderson said he thought that a car had crashed, but then he heard the noise again.

"Then, just a giant brown cloud of smoke and a few more explosions," said Anderson, who is a production editor at CBC. "You could hear the grates rattling. It probably happened four or five times, I think, maybe more."

"It definitely sounded like some type of explosion, but not like fireworks. I don't know how to describe it — not like fun, you know what I mean?"

He pulled his phone out and started recording.

Update: reports are that the loud explosive sound came from underground. Cause not yet determined. No injuries reported at this point. ^adc

Even with his headphones in, Brendan Panikkar heard the blasts on his walk home. The 25-year-old said that the air began to fill with smoke almost immediately.

"A few of us that were around the area were all looking over obviously confused like, 'Was that a bomb?'" he said. "Luckily  no one was walking over those grates."

Despite the initial shock, Panikkar said most people stayed calm and didn't jump to conclusions about the cause.

"Obviously it didn't smell very good," he said of the smoke. "It caused a few us around to cough from inhaling it."

That's exactly why the platoon chief told people to stay away from the area.

"You don't want to be in the smoke," Shaw said. "You can appreciate it's an electrical fire so it's a lot of plastic, probably some coolants, oils and whatnot in there."

Police have since closed off Front Street West and Adelaide Street at King, which itself is closed between Yonge and Bay streets.

The King subway station is close to where the smoke can be seen, but TTC spokesperson Brad Ross said the subway is not affected.

The 504 and 514 streetcars, which travel along King, are diverting along Queen Street West between Spadina Avenue and Church Street.