My grandfather wanted a chance to fly again nearly 40 years after he retired from a long career with Air Canada and before that the air force during the Second World War. So my mom made it happen for his 98th birthday.

My grandfather wanted a chance to fly again nearly 40 years after he retired from a long career with Air Canada, and before that the air force during the Second World War.

So my mom made it happen for his 98th birthday. She signed her dad, Bill Finlay, up for a flying lesson out of an airport in Burlington, Ont.

I got to go along for the ride.

"We'll do a couple of circuits," my grandfather said. "I haven't flown for about 40 years so we'll see how it goes."

Spoiler alert: he was great.

Prior to the flying lesson, my grandfather's last turn in the pilot seat was when he retired in 1979. He flew a Lockheed 1011 from Pearson International to London Heathrow airport and back.

For those out there who aren't aircraft experts, my grandfather says that plane would seat about 285 people.

The Cessna 172 he got to fly for his birthday is a four-seater. So it's a little different.

"The wheels don't retract on this quite obviously," he joked while we were in the air.

The Cessna was certainly the smallest plane I'd ever been in. During the flight I asked my grandfather if the plane he learned to fly in was bigger. 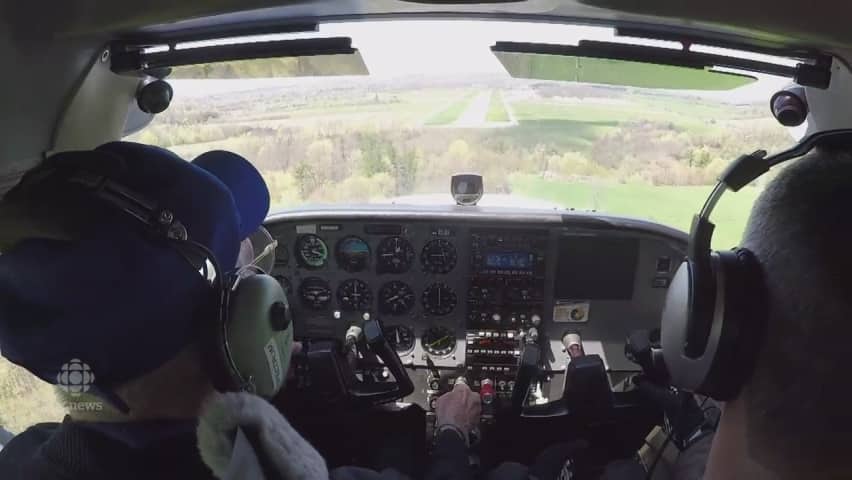 4 years agoVideo
3:18
Bill Finlay wanted a chance to fly again nearly 40 years after he retired from a long career with Air Canada and before that the air force during the Second World War. So his daughter made it happen for his 98th birthday. 3:18

Turns out his was smaller.

"The Tiger Moth was probably half of the weight of this airplane," said Dennis Simo, chief flying instructor for Spectrum Airways in Burlington.

My grandfather was a school teacher in Darlingford, Man., when he decided to join the Royal Canadian Air Force in June 1941.

After he got his wings, the air force put his teaching skills to good use.

"They sent me out to Brandon to a training school," he told me. "For the next two-and-a-half years I trained pilots how to fly."

By the end of the war he was flying transport planes out of England.

"I flew all over Europe and carried mostly servicemen," he said. "One time I had the Queen's messenger on board."

After the war, my grandfather wanted to keep flying, but he wasn't alone. He says there were about 700 ex-pilots looking for flying jobs in Winnipeg at the time.

But that didn't stop him. One morning he went downtown and got a meeting with the head of flight operations for a transport company — 15 minutes later, he had his first civilian flying job.

Less than a year after that he was working for TCA, which would later become Air Canada.

"I flew to pretty near every airport there is in Canada," he said. "And most of the major ones in the United States."

He also flew down to the Caribbean, and across Europe. But for his first flight in 40 years, we stayed local.

Simo sat shotgun with my grandfather and did some of the flying, but as he says: "I did very little other than give him some instructions."

"It's just amazing," said Simo. "Once I got him up in the air you could tell all the sparks were working the right way. He really does know what he's doing. Obviously he has a ton of experience."

My grandfather would have piled on more experience if he'd been allowed.

He told me he would have flown for at least another five years after he retired, but at the time Air Canada only allowed its pilots to work until they were 60.

My grandfather says flying didn't feel like work at all.

"Well it was a good excuse for it," he told me, chuckling. "Nevil Shute was a famous writer and he said that pilots were young fellas who were too lazy to work for a living."