The forecast was bright, the winds were good, which for this Toronto man meant taking a leap from the top of a Humber Bay highrise on Christmas Day.

The forecast was bright, the winds were good — and for one Toronto man that meant BASE jumping from the top of a Humber Bay highrise on Christmas Day.

BASE jumping, also sometimes written as B.A.S.E. jumping, is parachuting or wingsuit flying from a fixed structure or cliff. "BASE" is an acronym that stands for four categories of fixed objects from which one can jump: building, antenna, span, and earth.

He wouldn't give CBC Toronto his real name, but says he goes by the moniker, "Mike the Plumber."

Decked out in his Santa hat, the man and his filming companion climbed the 70 flights of stairs of an unfinished condo building in Etobicoke, and then 100 foot-rungs to the top of a crane, before plunging off the structure into the cool Toronto air, while his companion captured the act on video. 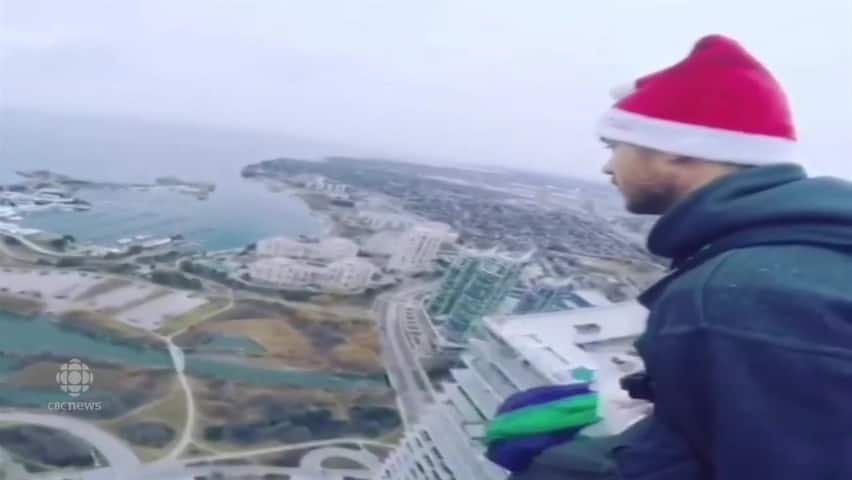 Base jumper climbs 70 flights of stairs before leaping off a condo in Humber Bay and releasing his parachute to sail down safely.

2 years agoVideo
0:17
Base jumper climbs 70 flights of stairs before leaping off a condo in Humber Bay and releasing his parachute to sail down safely. 0:17

"I think we have one of the best skylines in the world and there's no better way to see it than flying it yourself under a parachute," Mike the Plumber said.

Once in the air, he released his parachute and circled back to the parking lot where he and his friend first met up. 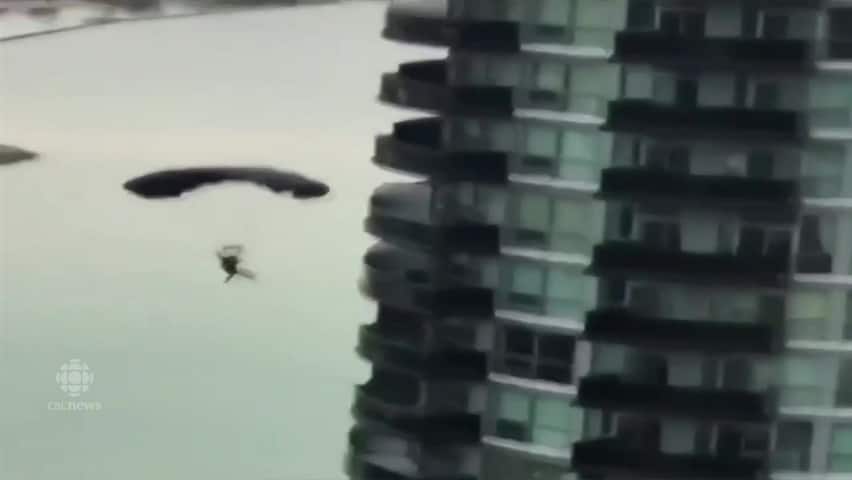 This video of the jumper was filmed and then found its way to social media, where it quickly spread.

2 years agoVideo
0:15
This video of the jumper was filmed and then found its way to social media, where it quickly spread. 0:15

He said the crane is the tallest in Canada right now, measuring 850 feet, and is considered a very high jump for BASE jumping — and it's a jump he says he has done many times before.

"From this neighbourhood, we got about 60 jumps in the last six months," he said.

"It's kind of like meditation for us because you're very focused, you're very into what you're doing."

BASE jumping could lead to criminal charge

Unlike past jumps, this time the video found its way to social media, and has now been viewed more than 200,000 times; but not everyone sees this stunt as a calming activity.

"It is the city. There are buildings, there are obstacles, and regardless of what someone's ability is, there is always that possibility for danger, things can happen," said Const. Allyson Douglas-Cook, with Toronto police.

The area he jumped from Tuesday, near Park Lawn Road and and Lakeshore Boulevard, has experienced increased traffic recently from other base jumpers, and was even nicknamed "Sky Dive Parklawn."

Douglas-Cook said police received at least two calls about someone paragliding in the area and says she doesn't want the incident to happen again.

While Mike the Plumber could be caught for trespassing, she also said it's possible this kind of activity could lead to a criminal charge of public mischief.

"We strongly discourage this kind of activity in the city," Douglas-Cook said. "Fortunately this is not something we have a lot of reports of."

But Mike the Plumber doesn't want anyone to follow in his footsteps.

"Don't just go out there and start jumping," he said. "It's something that could be very, very dangerous if you don't know what you're doing."

'I think it's a little crazy'

With the growing number of jumps from this collection of buildings, some people are starting to take notice.

"I think it's a little crazy," said nearby resident Leigh Agozzino. "I'm concerned someone would get hurt."

"I don't think that's a safe thing to do here. I drive down this road all the time, if something is flying out of the air, it could potentially be a hazard," she said.

"I have not seen it personally but I hear a lot of activity, a lot of people talking about it," said Cory Agozzino. "Unlike her, I think it's pretty cool."

With files from Kelda Yuen and Derick Deonarain