The Ontario Provincial Police (OPP) will be conducting an investigation into the violent arrest of a 20-year-old man in Barrie, Ont., that was captured on video and posted to social media Thursday.

The Ontario Provincial Police (OPP) will be conducting an investigation into the violent arrest of a 20-year-old man in Barrie, Ont., that was captured on video and posted to social media Thursday.

On Friday, Barrie's chief of police Kimberley Greenwood requested an investigation from an outside police service, saying the move is to ensure the process is "transparent and accountable."

"I acknowledge the public's concerns being expressed based on the limited availability of information at this time. I want to assure the community that any findings of misconduct will be pursued," Greenwood said in a statement.

"The images captured in the video are concerning to both the public and myself," she said in a statement earlier on Friday.

An officer involved in the arrest has been reassigned to alternate duties pending the outcome of the investigation, the statement reads.

In a cellphone video posted to Facebook, a police officer can be seen pinning a man to the ground and trying to arrest him. Bystanders can be heard shouting that the man was skateboarding, and that the officer is using excessive force. A skateboard can be seen nearby.

The video does not show what led to the incident, but police say it took place at 3 p.m. Thursday on Dunlop Street East. The statement says a 20-year-old Barrie man was charged with causing a disturbance and assault with attempting to resist arrest, but it does not offer any insight into what exactly took place. 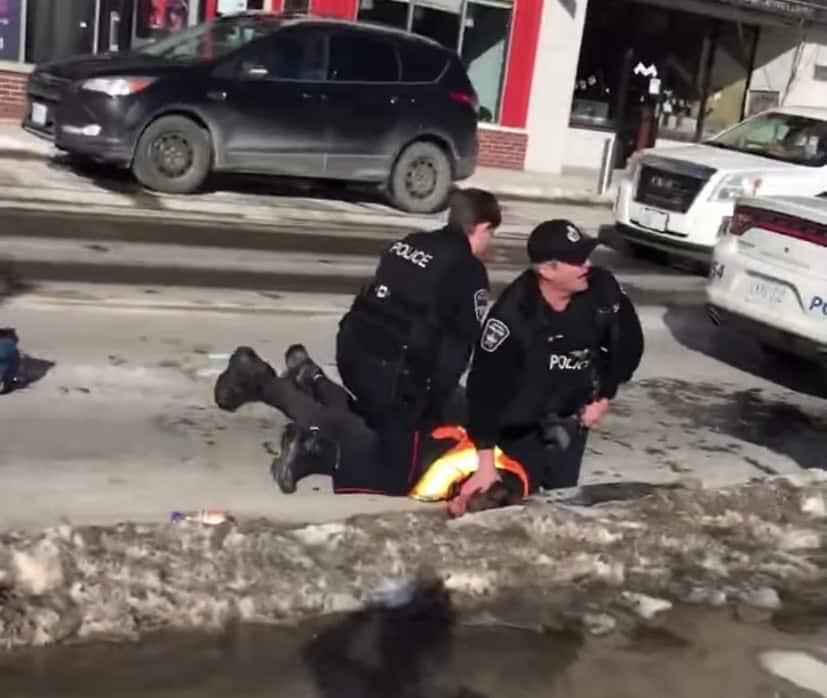 25 days ago
0:16
Barrie police say they are "looking into" a video posted to social media on Thursday showing a violent interaction between a man and local officers 0:16

Gary Grisdale, who identified himself in messages to CBC News as the man's brother, said the incident happened after his brother "went through a red light on his longboard after looking both ways to make sure the coast was clear." Grisdale declined to give his brother's full name.

At one point in the video, the man frantically screams "get off of me," while the officer repeatedly tells him to stop resisting.

At one point the officer appears to strike the man with the butt end of the Taser, before two other officers arrive and help flip the man onto his stomach. The original officer can then be seen hitting the man in the back of the head. That officer then yells at onlookers to get back or "you're going in."

As people watching protest, the same officer again yells, "You wanna go in?" before saying, "Yeah, get it on the news, man," to a person who is filming the situation.

The officer can also be seen slamming the door of a police cruiser after the man he was trying to arrest is placed inside.

Grisdale told CBC News that his brother was getting checked out at a hospital Friday, and said he has a "bump the size of a tennis ball on his forehead."

I've seen the videos of the violent arrest on Dunlop Street. This will be fully investigated. I won't be ignoring this, and once we have all the details, there will be full accountability.

Barrie Mayor Jeff Lehman said the incident would be "fully investigated" in a post on Twitter Thursday night.

"I've seen the videos of the violent arrest on Dunlop Street," he wrote. "I won't be ignoring this, and once we have all the details, there will be full accountability."

A camera operator from CBC/Radio-Canada also appears in the video for a moment. He can be seen placing a hand on the man's leg while he is on the ground. The CBC employee's role in the incident has not been clarified by CBC/Radio-Canada. He was on shift with CBC at the time.

Sgt. Kerry Schmidt confirmed that the camera operator is an unpaid volunteer with the OPP Auxiliary. Auxiliary members assist OPP officers with things like community events and RIDE initiatives, according to the organization's website.

CBC spokesperson Chuck Thompson said in an email that the incident only came to the corporation's attention Thursday night, so beyond confirming that the camera operator is an employee, "it would be premature for us to say anything more until we have thoroughly reviewed all aspects of the matter."

Thompson confirmed that the employee is a volunteer with the OPP, but said the CBC would not be commenting further until the circumstances have been reviewed.

The camera operator denied an interview request citing "an internal investigation," and referred a reporter back to CBC communications.

Barrie Police say they have asked an outside police force to investigate both the events leading up to the arrest and the conduct of the officer. It is not yet clear what service will be conducting that investigation.

"The Barrie Police Service holds its members to the highest levels of accountability, and public trust and confidence in our members is of the utmost importance," the news release reads.

With files from Sabrina Jonas