The mother of a one-year-old, who often brings her baby to class as she works to complete her bachelor's degree, says her school has been incredibly supportive.

'It's always my pleasure to support my students,' professor says

Zyra attended her first class at Toronto's York University when she was just 12 days old.

Zyra's mother, Larissa Crawford, is working toward graduating with her bachelor's degree in June — and she says her now one-year-old daughter has been along for the ride since her days as a newborn.

"All of my professors have been absolutely phenomenal with me bringing my daughter into class," she told CBC Toronto.

A perfect case in point: on Monday, she arrived at an early morning class feeling sick and was unable to chase Zyra around the room, so her professor, Tokunbo Ojo, stepped in.

"He just picked her up," and lectured with her on his hip, said Crawford. "I was able to write all my notes. I was able to get everything I needed out of the class, and it was fantastic."

"It's always my pleasure to support my students and ensure that they get the best out of my classes," Ojo said in an email to CBC Toronto. "It's my belief that everyone should have access to education."

He says that having a child in a lecture has never caused a disruption to his class, but rather made for more "positive interactions" and a better learning experience. 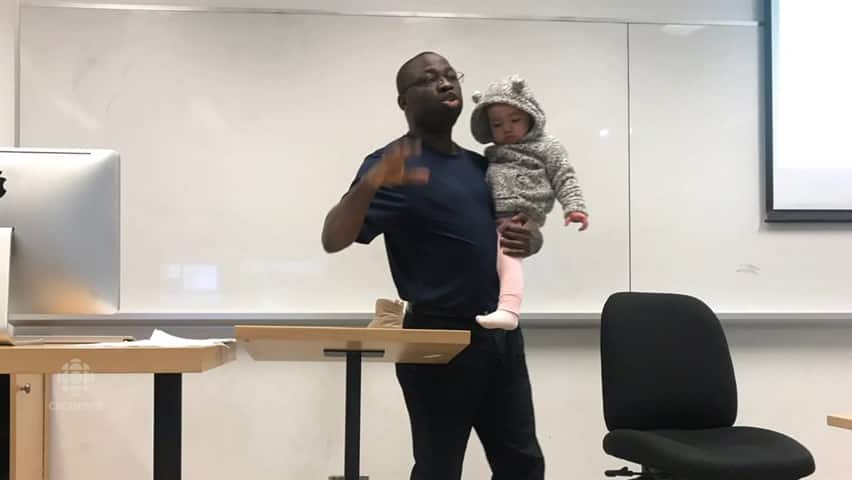 York University prof steps up with babysitting in class

3 years ago
0:21
York University communications professor Tokunbo Ojo has become a minor viral star after pitching in with Zyra, his student's one-year-old daughter during a lecture. 0:21

Crawford says all of her professors have been similarly helpful, as have colleagues at the Centre for Aboriginal Student Services, where she works full-time.

"I see this acceptance and support of me bringing Zyra into class as one of the most feminist acts a lot of my professors have shown — and I'm so thankful for it," she said.

Crawford, who has babysitters but does not use a daycare, also works on anti-racism policy at York and sits on several committees, and her daughter comes with her to those meetings, too.

"There's no way that I'd be able to do that if I wasn't able to bring Zyra," she said of her policy work.

She posted about Ojo on Facebook, and her photo of him lecturing has now been shared hundreds of times.

It's not the first time a professor has garnered attention for pitching in with a student's child — several professors around the world have found themselves in a temporary limelight for similar behaviour over the last few years.