The Toronto Zoo has announced the first-ever giant pandas born in Canada — twins that made their way into the world Tuesday morning. The Toronto Zoo has announced the first-ever giant pandas born in Canada — twins that made their way into the world Tuesday morning.

Er Shun, one of two pandas on loan to the zoo from China, gave birth early Tuesday, it announced on Twitter. 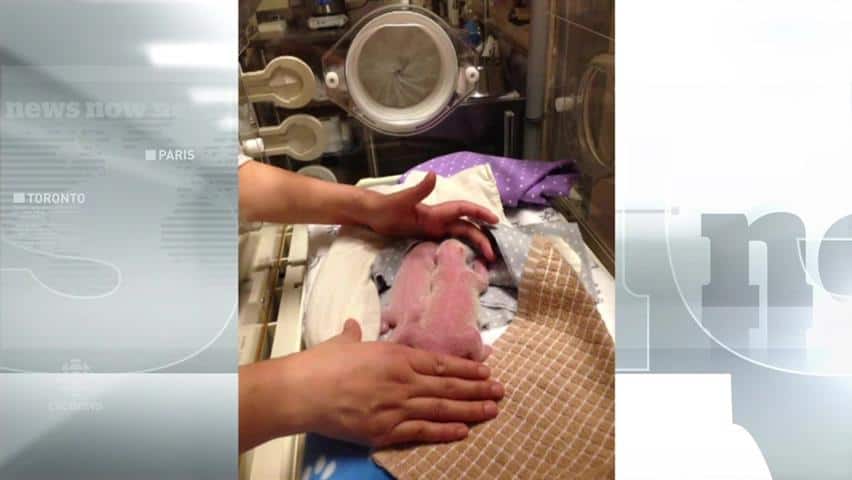 5 years ago
1:10
The Toronto Zoo has announced the first-ever giant pandas born in Canada — twins that made their way into the world this morning 1:10

Er Shun and the cubs are now under constant observation by giant panda experts from Chengdu Research Base of Giant Panda Breeding in China, as the next several hours and days are critical to their survival.

"We are so proud to be contributing to the ongoing survival of this endangered species," John Tracogna, the Toronto Zoo's chief executive officer, said in a statement Tuesday morning.

For the next several months, the cubs will remain in the maternity area of the giant panda house, which is not open to the public. But zoo staff said they will try to provide regular updates on their progress.

The zoo announced that Er Shun was pregnant with two cubs a couple of weeks ago, saying the father could be any one of three pandas.

The gestation period for pandas is anywhere from 87 to 186 days. Breeding pandas is a difficult process. Female giant pandas are only receptive to breeding once a year for a period of 24 to 72 hours.

Da Mao and Er Shun arrived in Toronto amid much fanfare, and were greeted at the airport by Prime Minister Stephen Harper and his wife, Laureen.

The pandas will be at the Toronto Zoo until 2018, when they'll move to the Calgary Zoo for five years.