A six-month-old girl is the first patient at Toronto's Hospital for Sick Children to benefit from a new test that detects an infection that can cause hearing loss.

On Dec. 10, six-month-old Francesca Jones sat squirming on her father's lap at Toronto's Hospital for Sick Children, a green light blinking from a device sitting just above her left ear.

Until then, she'd never heard before. But as an audiologist turned on her new implant and began to play soft beeping noises, Francesca's wiggling stopped.

Her eyes lifted to meet her mother's, breaking into a small smile.

You can watch that moment in the video below: 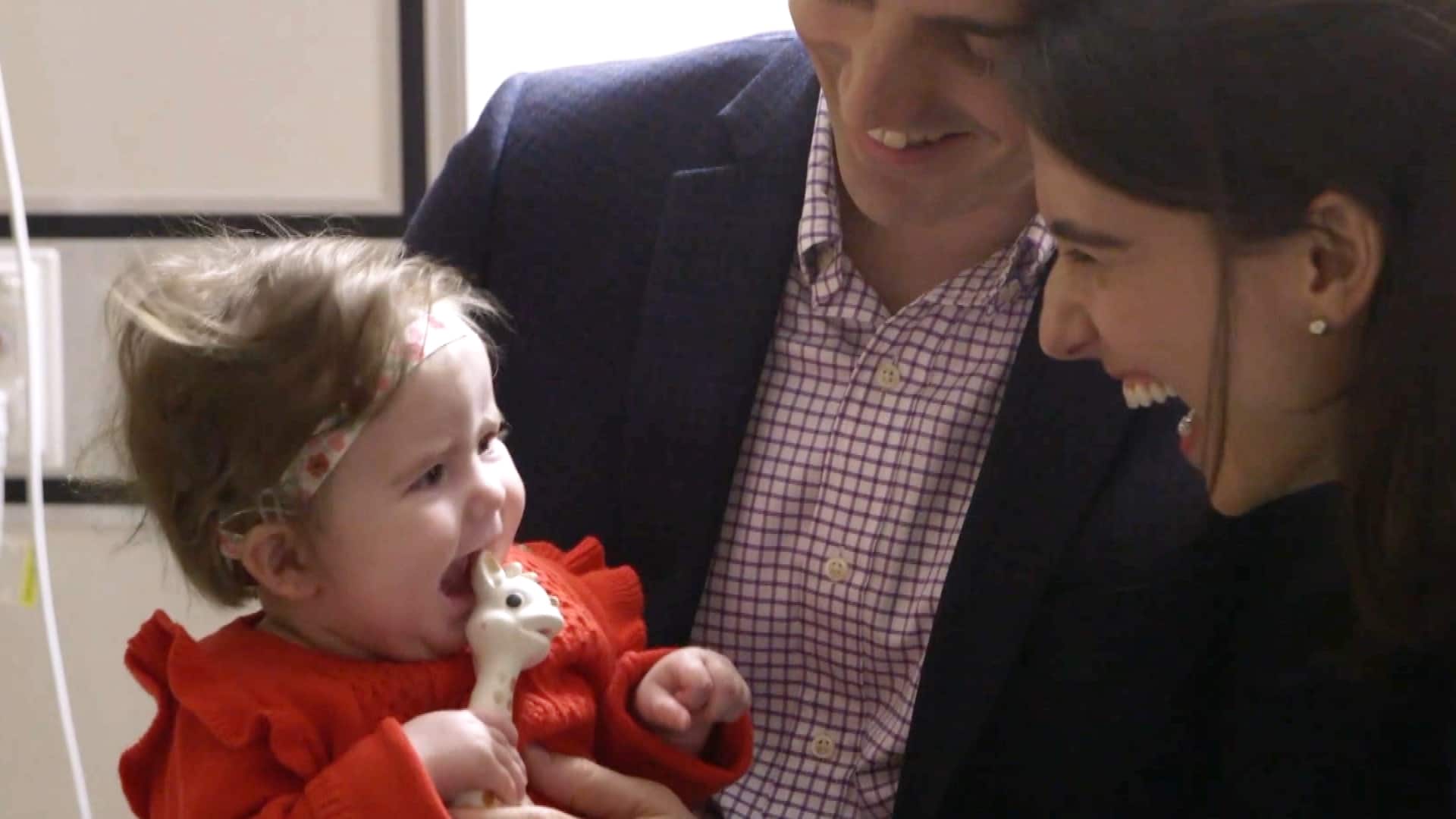 6-month-old baby hears her parents for the 1st time

2 years ago
0:21
"It was an unbelievable moment," says mom of baby girl born with rare, but detectable, condition that causes hearing loss. 0:21

"To say it was emotional is an understatement," said Julia Tirabasso, Francesca's mom.

"It was just subtle. It was looking down and then looking up and it was just… it was an unbelievable moment. I don't think I'll ever forget that."

Francesca is the first patient at the hospital to benefit from a test, introduced in April, to detect congenital cytomegalovirus (cCMV), an infection contracted during pregnancy that can cause side effects including hearing loss.

Early detection means specialists can intervene as soon as possible.

"We have a little bit of catching up to do and learning, but Francesca will be like all of her other peers," Tirabasso said.

"We were told 'Put her in ballet, put her in gymnastics, put her in activities that test balance, and you know, let her shine.' She's just like every other child."

About 900 babies in Ontario are exposed to cCMV every year, but only about 20 per cent will have hearing loss, according to Dr. Sharon Cushing, director of the hospital's cochlear implant program.

"It is the most common virus that pregnant moms can get exposed to," she said.

All babies in Ontario have their hearing tested after birth, but enhanced screening for the infection was introduced in April.

Francesca's parents got the advanced testing after she failed her initial test.

"The virus had some effects on her tone, her muscle tone, and in her hearing and it progressively got worse to be profound hearing loss," said Francesca's father, William Jones.

"It's been six months of a lot of uncertainty."

After the diagnosis, doctors tried antiviral medications, but they didn't help with Francesca's hearing.

So they gave Francesca a cochlear implant — a small device placed in an incision above the ear. Small electrodes are connected to the cochlea inside the ear, and when the patient recovers from surgery, an audiologist turns on the device to slowly begin introducing sound.

Francesca is the third-youngest patient, behind two three-month-olds, to have undergone the procedure, but according to Cushing, earlier is better.

"The brain is just sitting there waiting to hear sound and to develop in response to that sound, and so even though six-month-olds don't have language, they are looking for that auditory environment to help with their brain development," she said.

SickKids started its cochlear program in 1990, and has since given more than 1,000 children the chance to experience sound.

"Normal hearing is of course the gold standard, and we're always aiming for that, but this does allow our kids with severe to profound hearing loss to have access to sound that they certainly would never have access to without this kind of technology," said audiologist Susan Druker.

Druker said children do have to wear the device for the rest of their lives, but if it's implanted early enough, they eventually don't require much additional support.

"When you're dealing with implanting a baby as young as Francesca, we find the success rate is very, very high," she said.

"The quality of the sound is probably different though than what we hear when we have normal hearing. The nice thing about putting the implant in on a baby is that this becomes their normal."

Back at home, Francesca's parents shake noisy toys in front of her, using specific words and therapies they've learned from specialists at SickKids, celebrating as she responds to each sound.

"This surgery has really changed the course of our lives and more importantly Francesca's life," Tirabasso said.

"We have a lot to be grateful for this year. This is an amazing Christmas gift."

Taylor Simmons works in all areas of the CBC Toronto newsroom, from writing for the website to producing TV and radio stories. Taylor grew up in Mississauga, Ont. and studied journalism at Western University. You can reach her at taylor.simmons@cbc.ca.