Thousands of building permits issued by the city of Toronto remain open with no final inspection to show the work was performed properly or safely, according to a city auditor's report.

Thousands of permits remain open with no inspection 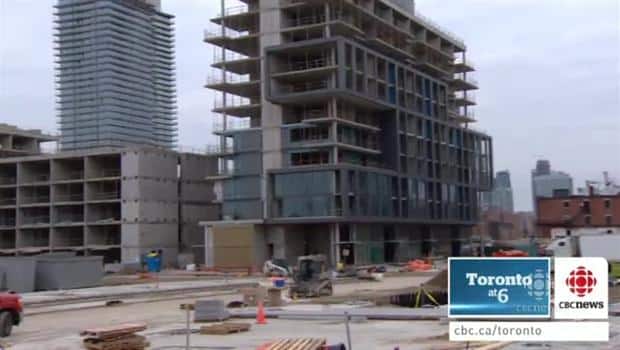 7 years ago
2:50
Thousands of building permits issued by the city of Toronto remain open with no final inspection to show the work was performed properly or safely, according to a city auditor's report. 2:50

Thousands of building permits issued by the city of Toronto remain open with no final inspection to show the work was performed properly or safely, according to a city auditor's report.

The report by Auditor General Jeff Griffiths says more than 146,000 building permits remain open — some stretching back as far as 1975 —  for construction and renovation jobs around the city.

You can click here to read the city auditor general's report into problems with the city's building permit process.

Building permits are issued by the city for construction and renovation work. The permit process requires that a city inspector sign off on the work at various stages to ensure it has been performed correctly and in compliance with building codes. A permit remains open until the work receives a final inspection.

Griffiths's office found that more than two thirds of Toronto's 146,000 active permits have not been inspected for more than a year, including thousands linked to fire and security upgrades. The report also found that in 70 per cent of cases where inspectors flagged a violation, there was no follow up inspection within a year to ensure the problem was addressed.

Coun. Peter Milczyn, chair of the city's planning and growth committee, said he is alarmed by the findings.

"To see that number of inspections simply not performed is really shocking," he said. "It means the extent of the problem is far greater than simply delays. It leads you to believe there are whole projects that aren't getting inspected properly," he said.

"What you'll hear from residents is an inspector went out and then what, nothing? Nothing seemed to come out of it," he said. "That kind of follow is key to the whole thing. There's no point in pointing out that there's some kind a flaw if there's no compliance follow up."

To see that number of inspections simply not performed is really shocking.- Coun. Peter Milczyn

In 2012 the city issued 39,670 building permits and closed 27,960. Toronto Building, the office that oversees building inspections, has 161 staff members, 131 of them are building inspectors.

The auditor's report also found that extra fees were often not applied in situations where work was started without a permit. Also, many inspections lack the detail required by the building code.

The report also warns that errors in the inspection activity could leave the city liable for lawsuits for negligence.

City councillors will address the problem at Friday's audit committee.