Anti-Trump protesters clash with smaller group of supporters in Toronto, one person arrested

At least a thousand people took to the streets of Toronto to rally against the U.S. president elect Donald Trump and the racist and xenophobic rhetoric they say he is responsible for.

At least a thousand people took to the streets of Toronto to rally against U.S. president-elect Donald Trump and the racist and xenophobic rhetoric they say he is responsible for.

Protestors gathered at Nathan Phillips Square Saturday afternoon before marching down Bay Street shouting the slogan, "Love Trumps hate!"  toward Trump International Hotel and Tower, where they clashed with a smaller group of a few dozen Trump supporters.

At one point, tensions between the two groups peaked as they faced down against each other, separated by police barricades. "No way, KKK!" the anti-Trump crowd shouted at Trump supporters carrying signs bearing the words, "Make Canada Great Again."

Toronto police confirm one arrest was made at the rally, but would not provide further details. 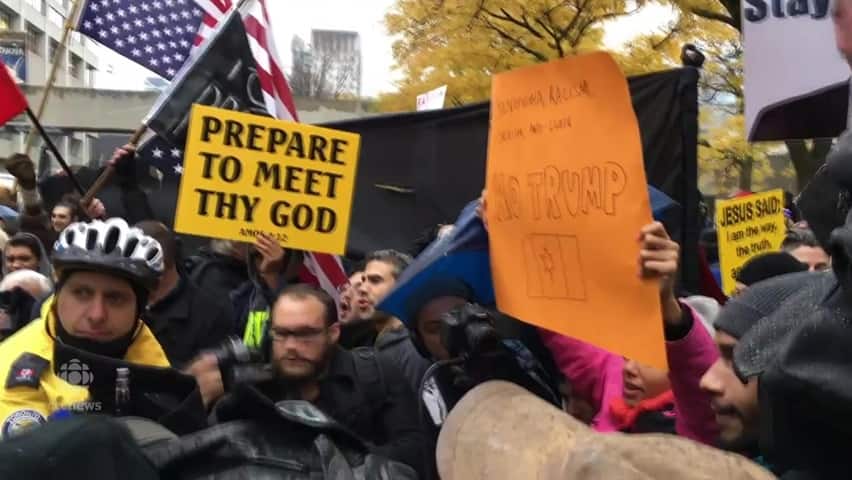 Anti-Trump protesters clash with smaller group of supporters in Toronto

4 years agoVideo
0:24
At least a thousand people took to the streets of Toronto to rally against U.S. president-elect Donald Trump and the racist and xenophobic rhetoric they say he is responsible for. 0:24

One of those marching on Saturday was 66-year-old Joan Tadman, who travelled to Erie, Pennsylvania, ahead of the election to help with the campaign for Democratic presidential candidate Hillary Clinton.

Tadman said she was joined by eight other young people from Ottawa and two others from Montreal.

"The next morning when we were leaving after the election, the Americans there were in tears, we were in tears and they sang, O Canada to us," she said.

Tadman said she almost got involved in the clash between the two groups but restrained herself.

"I thought, 'No, not our way,'" she said, recalling her young nephew, the son of an Iranian relative.

Ryan Squiers told CBC Toronto said he feels he is among a minority of Trump supporters in Canada and showed up to exercise his right to counter-protest.

Jennifer Mitchell, 29, says she marched Saturday to do her part to protect Canada from the spread of xenophobic sentiment.

"Sometimes we think, 'Oh, they're just our crazy neighbours next-door. We don't have to worry about that here,'" Mitchell said.

"But we had a justice in Hamilton who wore a 'Make America Great Again' [hat] in his courthouse. We have a woman who's trying to become the leader of the Conservative Party, who wants people to prove their Canadian values," she said referring to party leadership hopeful Kellie Leitch.

"That's disgusting and that's not what I stand for," Mitchell said.

On its Facebook page, Rally Against Trump organizers said the purpose of the march was to "stand together, united against hate, and show the world that Canada stands in solidarity with our brothers and sisters to the south who oppose the sexist, racist, misogynistic, xenophobic rhetoric set loose by Donald Trump."

"This rhetoric has no place in Canadian politics and culture."

Some of the faces of Torontonians rallying against US President Trump. <a href="https://t.co/8ON42SWj46">pic.twitter.com/8ON42SWj46</a>