Toronto Transit Commission CEO Andy Byford is stepping down in mid-December to take a job as president and CEO with New York City Transit.

Toronto Transit Commission CEO Andy Byford is stepping down in mid-December to take a job as president and CEO with New York City Transit.

Byford, who starts his new job in mid-January, made the announcement at the TTC headquarters on Tuesday morning.

He told reporters that his new job is "arguably the toughest job in transit right now."

Byford said he is most proud of what he called "my signature policy — that of changing the prevailing culture at the TTC."

"I will look back on my time at the TTC as the absolute highlight of my 28-year transit career to date," he said.

Byford said his last task will be to deliver the opening of the Line 1 subway extension to Vaughan in York Region, with its six new stations and 8.6 kilometres of new track.

The TTC's deputy CEO Rick Leary will be acting CEO starting on Dec. 22.

On Sunday, the New York Times published the results of an investigation that revealed the city's subway system has suffered from years of neglect and bad decisions, making the New York City Transit the worst performing system in the world.

When he started at the TTC in 2011, Byford said he realized the transit system needed to get back to basics. That realization led to a five-year plan introduced in 2013. 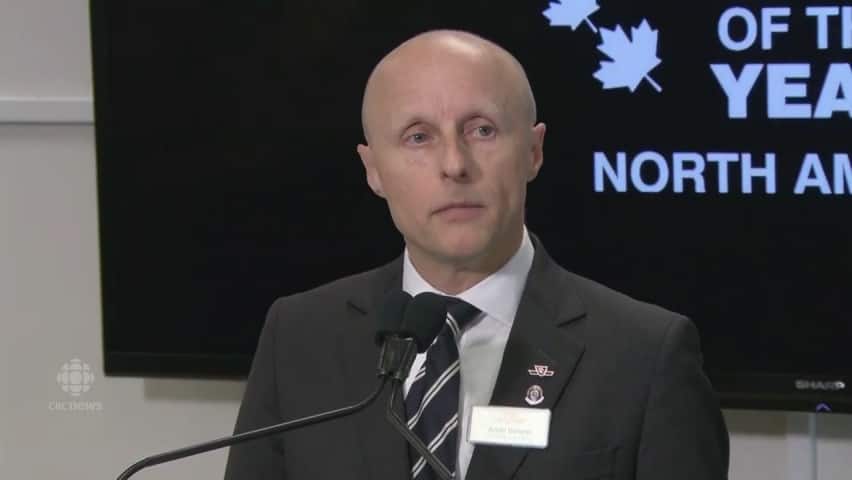 "While there will always be room to improve still further, the basic tenets of the service have been substantially improved with subway delay minutes down 21 per cent year-over-year, delay incidents down seven per cent, track fires — a major cause of delay — down 42 per cent and short turns, long the bane of bus and streetcar riders' lives, down nearly 90 per cent," he said.

"The system is cleaner, information is clearer and customers have noticed the difference. Over the last five years, customer satisfaction, as measured by independent surveys, has risen a statistically significant seven percentage points to record levels that are being sustained."

Byford said his achievements include more reliable vehicles, a new smart card system being rolled out, modernization of the TTC fleet, 50 new streetcars and four-year contracts negotiated with TTC unions in 2014.

He acknowledged "some challenges remain." He said pressure needs to be applied to Bombardier to deliver new streetcars and a new ridership strategy is needed for the TTC.

Mayor John Tory thanked Byford for his leadership in a statement.

"He leaves the TTC in much better shape than when he became CEO five years ago," Tory said.

"Mr. Byford has been no less than superb when it comes to taking the tens of millions of additional dollars city council has given the TTC under my leadership and that of TTC Chair Josh Colle, and investing this new money quickly and wisely in restoring services previously cut and adding new services."

Coun. Josh Colle also thanked Byford for his service and said he will be missed at the TTC.

"Since Andy joined the TTC six years ago, he has demonstrated an unwavering dedication to continuously improving the TTC, fighting for better transit, and for our customers," Colle said.

"He has succeeded at all of that, and more. We have all been fortunate to have his expertise and leadership here in Toronto where transit is never far from the top of the issues list.

"He loved to ride the system and talk with our customers. He is a great communicator, as we have all seen in action over his time with us here in Toronto. New York is lucky to have him."

Colle said an executive search has been hired and the TTC hopes to have a new CEO by July 2018.

Frank Grimaldi, president of Amalgamated Transit Union Local 113, which represents more than 10,000 TTC workers, said the union hopes the city hires a replacement who respects the rights of workers and pushes for more public transit in Toronto.

"We wish Andy Byford well as he leaves the TTC and moves into his new role," Grimaldi said in a statement.

Originally from Plymouth, England, Byford came to the TTC  from Sydney, Australia, where he was chief operating officer for Rail Corporation New South Wales.

Before that, he held several positions with rail operators in the United Kingdom, including general manager of customer service for several lines of the London Underground.

My friend and boss, Andy Byford, is leaving the <a href="https://twitter.com/hashtag/TTC?src=hash&amp;ref_src=twsrc%5Etfw">#TTC</a> to be president and CEO of New York City Transit. So proud and gutted at the same time.