An Ontario nurse explains how COVID-19 gets into care homes, then hits health-care workers

An Ontario nurse who survived COVID-19 can't shake the fears that ran through her mind as the virus made her feel ill from head to toe. She's among a rising number of health-care workers who've been infected across the province, with close to 2,900 cases now confirmed.

As the weeks went by in March, and COVID-19 cases in Canada kept ticking upwards, Pamella started to worry about residents coming and going from the long-term care facility where she worked.

The registered practical nurse had been caring for elderly residents at the 126-bed Rekai Centre at Sherbourne Place in Toronto for 16 years, administering their medications, hooking them up to dialysis machines, and answering calls from their loved ones.

It was common for those clients to leave for therapy sessions or medical appointments. Amid a pandemic, Pamella feared the constant back and forth could put everyone at risk.

By mid-March, the no-nonsense 54-year-old — whose identity CBC News is protecting due to concerns about her job security — started warning her colleagues COVID-19 was clearly spreading through the city. She felt the home should cancel outside appointments for a while, and stop taking new admissions too.

Instead, Pamella says a resident was sent across the downtown core for his regular therapy appointment at the Centre for Addiction and Mental Health — a facility which has since reported multiple outbreaks.

The man later started coughing on March 19. Just over a week later, test results showed he had the virus.

"In the back of my head, I'm thinking, 'Oh Christ,'" Pamella recalls.

A married mother of three, she didn't want to risk catching the potentially deadly illness and bringing it home to her family — but it was already too late. The man had mingled with fellow residents at Rekai Centre for days before his cough started, and staff members didn't wear full protective gear while caring for him until after he showed symptoms.

As Pamella puts it: "We were already exposed."

Soon after the resident's results came back, Pamella started to feel feverish, with a bit of a headache. Maybe it was nothing, she thought. Then she started sneezing, too.

On the last Sunday in March, she drove to St. Michael's Hospital in downtown Toronto to get tested.

It's now early May, and the COVID-19 crisis in Canada is still in full swing. Here in Ontario, roughly 18,000 people have fallen ill and 1,300 have died, while others could be infected without even knowing it.

Health-care advocates warned front-line workers were among those most at risk early on in the pandemic, amid concerns over personal protective equipment shortages and memories of the staggering toll on hospital staff during the SARS epidemic in 2003.

The predictions are proving accurate. While it's not clear where each health-care worker is getting infected, the number of positive cases keeps on rising — hitting 2,892 confirmed cases by May 5, according to the province.

So far, at least five of those infected front-line workers have died, and front-line staff are increasingly making up a greater chunk of the grand total of cases.

In early April, roughly 10 per cent of Ontario's cases were people working in the health-care field, including physicians, nurses, and personal support workers, as CBC News first reported on April 2 (the province did not start reporting this detail in its daily epidemiological summary until April 5).

Now, a month later, health-care workers make up roughly 16 per cent of all cases.

After joining the rising number of workers testing positive, Pamella stayed in isolation, avoiding any contact with her husband and her youngest teenage son, who still lives at the couple's home.

Alone in a bedroom as March turned into April, Pamella coped with headaches and the occasional cough as her mind filled with all the news reports she'd seen about patients succumbing to the disease.

She also noticed her mild, cold-like symptoms were evolving into something more strange.

There was a bitter taste in her mouth. And her appetite disappeared. As someone with diabetes, Pamella kept drinking juice while remaining mostly bedridden, hoping to make sure her sugar levels didn't drop since she wasn't eating regular meals.

The most frightening symptom, she says, was an all-consuming feeling of lightheadedness.

Around the clock, Pamella had to keep herself upright on her bed, otherwise it would feel like the room was spinning around her.

"All I kept thinking was: 'My god. I believe I'm too young to die. I have my kids,'" she recalls. 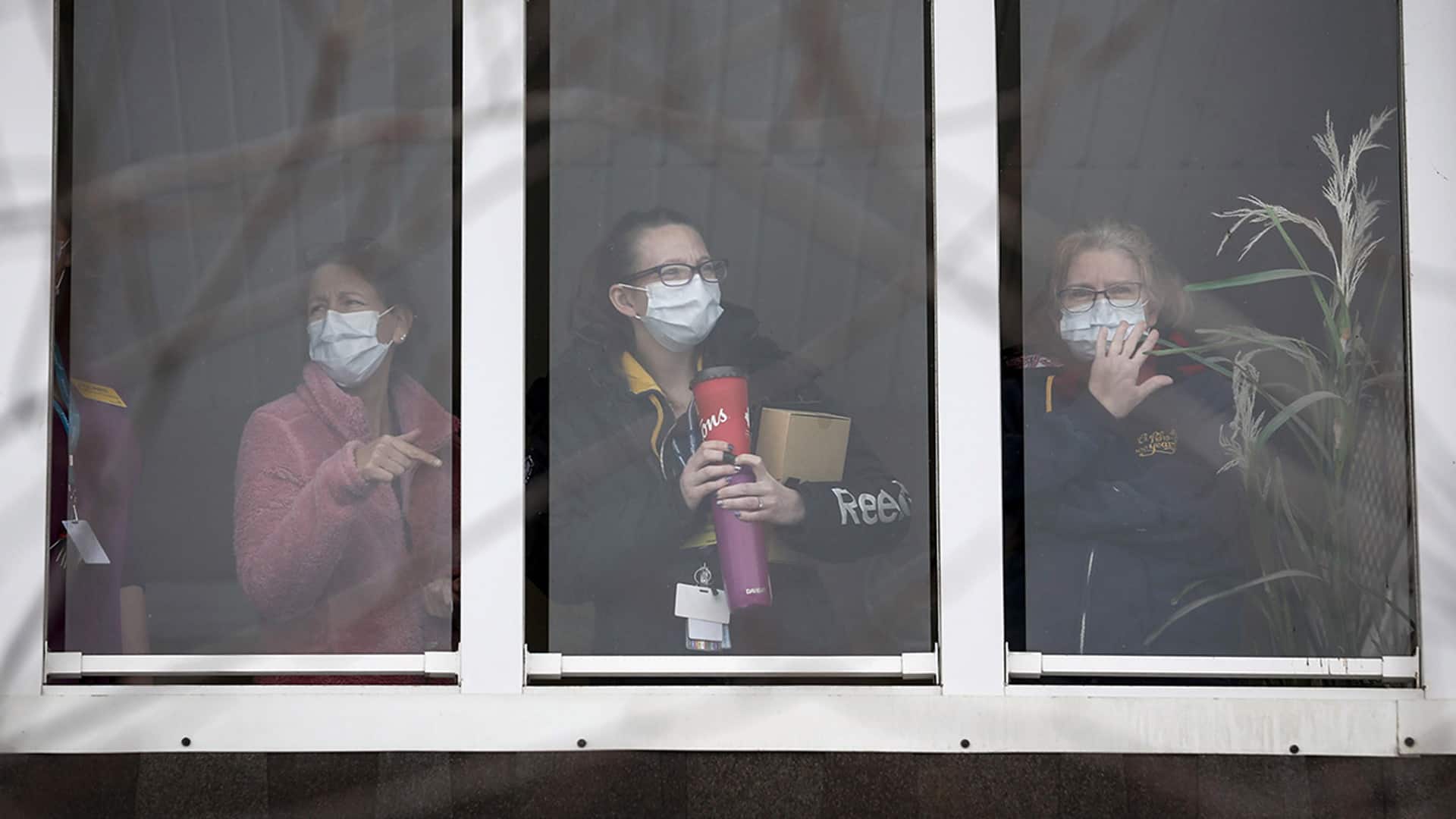 Inside the fight against COVID-19 in long-term care homes

10 months ago
3:18
Additional support has been brought in to some long-term care homes facing COVID-19 outbreaks. David Common talks to staff and the health-care workers brought in for support to hear what’s happening inside. 3:18

During those moments of private misery, she also learned some grim news from relatives in New York City, where hospitals were overrun with COVID-19 patients. One older family member in Brooklyn had battled the disease and survived, Pamella found out. A second relative, only in their 30s, wound up being on a ventilator in intensive care and later died.

Pamella kept reminding herself to stay strong, to have a sip of juice or eat a small snack if her body felt weak — anything to maintain some sense of control over the virus that made her feel ill "from head to toe."

Her husband also took time off work to keep an eye on her, and found he couldn't sleep while she was holed up in another room. Most nights, he told her later, he'd quietly open her door while she was sleeping just to make sure their worst fears hadn't been realized.

"Sometimes, I would turn and look," Pamella says, "and he would just ask: 'Are you okay?'"

17 residents have died at Rekai Centre

While Pamella was ill at home, the situation at the Rekai Centre at Sherbourne Place was deteriorating rapidly.

The novel coronavirus spread throughout the downtown facility, infecting at least nine staff members and 52 residents in just over a month, according to data from the Rekai Centres and Toronto Public Health.

So far, 17 of those clients have died, including the first ill resident who tested positive on March 27.

Sue Graham-Nutter, CEO of the Rekai Centres, stresses that first resident who showed COVID-19 symptoms was immediately placed in isolation, tested, and "monitored around the clock."

In a statement to CBC News, she also says all staff wear full personal protect equipment while caring for residents who have tested positive.

Since mid-March, Graham-Nutter adds, "only one resident" has left the facility, and that trip was for "critical medical appointments."

When asked about whether the province could have done more earlier to protect front-line workers, amid concerns over issues like residents going back and forth between facilities, chief medical officer of health Dr. David Williams said the notion of residents coming back to a home carrying COVID-19 is "an interesting assertion."

If long-term care residents are having health issues, on-site physicians may need to order tests that can't be found in the facility, he noted.

Others stress there are many interconnected issues that go far beyond any one policy or facility, given the hundreds of outbreaks now reported in long-term care homes and hospital sites across the province.

Some front-line workers in various hospitals have been urged to ration and re-use personal protective equipment, while others working in long-term care have experienced extreme staffing shortages.

In contrast, McKenna notes, front-line staff at many care homes without outbreaks have documented some common approaches. Most stopped visitors from entering early on, and reviewed whether residents needed to leave for outside appointments. Many also ordered extra supplies, ensuring they'd have a stockpile of personal protective gear if things took a turn for the worse.

On a broader level, and particularly in the case of privately run homes, she says it's crucial that the province starts ramping up inspections to protect not only residents, but the staff struggling to care for them safely.

As CBC News recently reported, only nine out of 626 homes in Ontario received annual, proactive quality inspections in 2019 — down from just over half of the province's homes the year before, and most of them in previous years.

Those full inspections need to happen alongside complaint-based checks, McKenna stresses, adding: "I don't think they should be notified in advance."

Amid the ongoing pandemic, other advocates say provincial officials need to mandate universal testing protocols for healthcare workers, and those in their care, to catch cases earlier.

"Remove the long-term care residents with COVID. Take them to hospital. Protect the people who don't have it in those facilities. Test like crazy to make sure other residents and staff are free from the disease," stresses Michael Hurley, president of the Ontario Council of Hospital Unions.

Currently, health-care workers are given priority at COVID-19 test sites, and the province is pursuing "proactive surveillance testing" in long-term care homes, including testing residents and staff without symptoms — though that directive was not sent from the Ministry of Health until April 21.

More than 31,900 cumulative tests have been completed in long-term care homes so far, with close to 38 per cent of the resident population tested, according to the Ministry of Long-Term Care.

'Some people have it really bad'

While officials in the outside world braced for new outbreaks and rising case counts, Pamella slowly began to feel like herself again.

The dizziness faded, and her appetite returned. She even started to experience unusual food cravings, like a sudden desire to munch on pickles.

"If you're pregnant, it's not mine!" her husband joked, a moment of levity like the couple hadn't experienced for weeks.

Fully recovering from COVID-19 took roughly a month for Pamella. Meanwhile, many of her infected colleagues are still enduring the whole terrifying spectrum of symptoms.

"A lot of the staff members I've been in touch with — some people have it really bad," she says. "Some people are not able to keep down anything. Vomiting. Body aches."

Standing on her home's wraparound porch, the space she'd come to get a few minutes of fresh air while enduring at-home isolation, Pamella announces with a broad smile that she's officially among those who "conquered" COVID-19, after recently testing negative twice in a row.

She's now eager to get back to work in the long-term care sector, despite the risks. But she maintains her employer failed to protect front-line workers like her by allowing residents to come and go during the pandemic, potentially carrying back the virus that has since infected dozens of the home's residents and staff.

"From the minute this pandemic started... we should've stopped all the appointments. They're not urgent. They're not necessary," she says.

In the future, all health-care facilities and long-term care homes need to store ample personal protective gear, isolate infected residents quickly, and put stronger plans in place for infection control, whether it's for this ongoing pandemic or the next flu season, just months down the line, Pamella says.