A whirlwind year is winding down for Alessia Cara but not before an important pit stop.

Children eagerly take photos with singer, who once was a SickKids patient, too

A whirlwind year is winding down for Alessia Cara, but not before an important pit stop.

The Brampton, Ont., singer sang at the Hospital for Sick Children on Monday, just a day after her performance at the Jingle Ball in Florida.

The 20-year-old sang her hit single Scars to Your Beautiful as well as Christmas carols to a small group of patients.

"I think that all of us, whether we believe it or not, we're all beautiful in so many different ways," she told the crowd.

"If you see somebody in the hallway, compliment them. Compliment yourself and remind yourself that you're good enough, you're powerful enough and smart enough."

For the event, Cara partnered with Duracell, which donated $180,000 to SickKids in her name. Throughout December, Duracell will donate to the Children's Miracle Network for every pack of batteries purchased at Walmart.

The children eagerly took photographs with Cara, who was once a patient at the downtown Toronto hospital.

As a two-year-old, she underwent surgery to remove the saliva glands in the left side of her mouth, she said. She calls the mark the surgery left a "battle scar."

'Happy to represent for us'

It is important for Cara to use her stage to promote positivity, she told CBC Toronto's Dwight Drummond.

"I'm fortunate enough to have this platform now to be able to speak on things and have people listen."

"I would never say something that I didn't believe in or I didn't feel was right," she said. 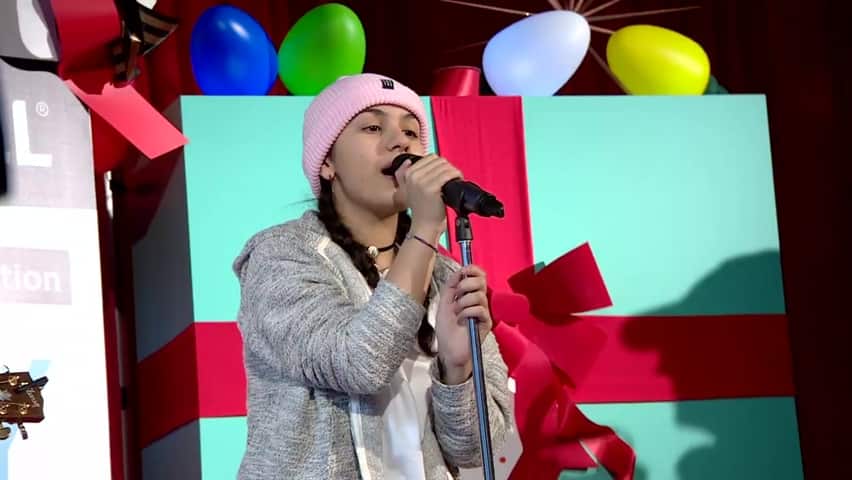 4 years agoVideo
2:37
Brampton, Ont., singer discusses her path to fame, her hometown pride and using her platform to deliver positivity. 2:37

Cara said she is still getting used to her rapid rise but she will never forget where she started.

"Sometimes people will say, 'Oh, you're from Toronto' but I always try to correct them — like Toronto's cool but I'm from Brampton. I have to represent my town," she said.

"I'm just happy to represent for us."