Hours after his arrest, Alek Minassian told a Toronto police detective he communicated with two mass murderers motivated by incel ideology and said the massacres they carried out inspired him to use a rented van "as a weapon" on Yonge Street.

EDITOR'S NOTE: CBC News has reviewed the entire Toronto police interview and has decided not to publish the full video. This is to limit the impact on victims' families and survivors of the attack and to help mitigate gratuitous publicity of Alek Minassian's views and alleged motivation. We have selected a brief excerpt of the video that adds some context and enhances understanding of what happened that day. Read more about our Journalistic Standards and Practices.

Hours after his arrest, Alek Minassian told a Toronto police detective he communicated with two mass murderers motivated by incel ideology and said the massacres they carried out inspired him to use a rented van "as a weapon" on Yonge Street.

These and other revelations come from a four-hour police video interview with Minassian after the then 25-year-old was charged with driving a van into pedestrians the afternoon of April 23, 2018, killing 10 and wounding 16. The video and a nearly 200-page transcript of the interview were only allowed to be released by the media on Friday, the deadline for appealing an Ontario judge's decision to lift the publication ban.

The Richmond Hill, Ont., man's case is set for a judge-only trial early in 2020.

When asked in the video how he feels about the deaths and injuries, Minassian, clad in a white jumpsuit, tells Det. Rob Thomas, "I feel like I accomplished my mission."

Minassian answered the question in the same matter-of-fact tone he used throughout the interview, whether he was asked about his university course work or the events on Yonge Street that Monday afternoon.

Minassian tells police he first started to "feel radicalized" after Elliot Rodger killed six people and injured 14 near a university campus in Isla Vista, Calif., and then killed himself in 2014 ⁠— four years before the van attack.

Talking to other incels online

Minassian told Thomas he and Rodger exchanged private messages on Reddit from January 2014 until three days before the Isla Vista attack in May 2014. At the time, online forums on the website 4chan were hotbeds for incels.

Incels, also known as involuntary celibates, are an online brotherhood of men who say they are unsuccessful in their romantic attempts with women and often express extreme feelings of misogyny and hatred.

"We found each other very interesting," Minassian, speaking in the video, says of Rodger. "We discussed our frustrations at society and being unable to get laid."

CBC News hasn't been able to independently verify Minassian's claim that he communicated online with Rodger and Chris Harper-Mercer, who shot dead nine people and wounded eight inside a classroom at Umpqua Community College in Roseburg, Ore., in October 2015.

In the police interview, Minassian says he published a Facebook post the day of the van attack, pledging allegiance to the "incel rebellion" and praising Rodger, who Minassian considers the rebellion's "founding forefather."

Never had a girlfriend as he was 'too nice'

Over the course of the police interview, Minassian says he has never had a girlfriend because he's "too nice."

Minassian says that after the attack by Rodger, he started "thinking and daydreaming" about taking action of his own and spent more and more time on incel-related online forums.

He also tells police he talked online with Harper-Mercer, who killed himself following the Oregon shooting as police officers arrived on the scene. Harper-Mercer had posted online about being an involuntary celibate.

Minassian tells the Toronto detective that despite that abstract plotting, on the day he was arrested, "the planning didn't occur until about a month ago."

Minassian says he phoned and booked a van rental through Ryder from Seneca College, where Minassian was a student, about a month before the attack.

He told police he decided on a 10-foot van because it would be "big enough to have an effect but not too big that I can't manoeuvre with it."

He goes on to say, "The van was the perfect medium size to use as a, my weapon [sic]."

In the month leading up to the attack, Minassian was wrapping up his bachelor's degree in software development.

Minassian also tells Thomas he chose April 23 as the day to pick up the van because he felt "it would be more symbolic if I had completed my exams."

That day in 2018, Minassian says, he picked up the van before 1 p.m., and drove about 20 or 30 minutes from the Ryder location to the Yonge and Finch area with only one thing "burning" in his mind.

"I'm thinking that this is it, this is the day of retribution," he tells Thomas.

Minassian says he didn't really plan the attack for the Yonge-Finch area but instead "started seeing a lot of people walking" and decided "it's time to go for it."

He goes on to describe speeding the van toward people, the van colliding with them and how "some people get knocked down on the way, some people roll over the top of the van."

The accused also told Thomas "the only reason I stopped my attack was because someone's drink got splashed on my windshield, and I was worried that I would crash the van anyways." 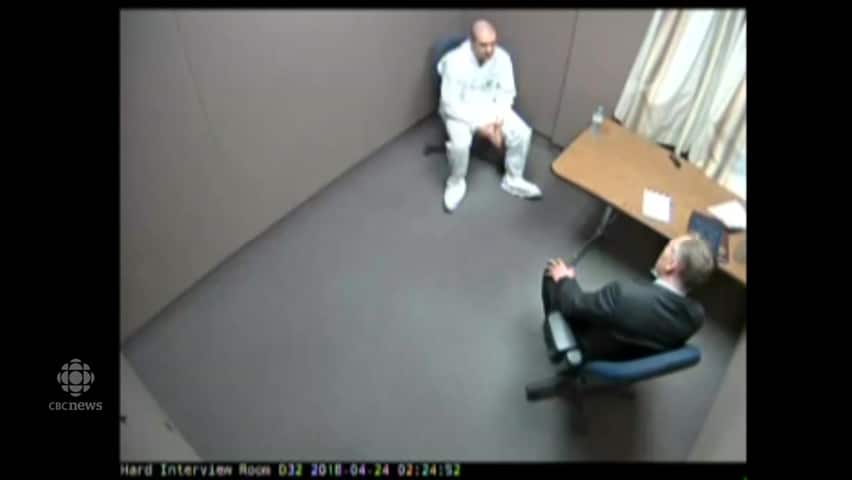 1 year ago
0:27
WARNING: This video might offend and disturb some viewers. Alek Minassian explains to Toronto police Det. Rob Thomas what prompted him to pull over and park, bringing to an end the deadly van attack that killed 10 people. 0:27

From there, Minassian says he had intended to die through suicide by cop and details his repeated attempts to have Const. Ken Lam shoot him by holding his wallet like a gun and telling Lam he had a gun in his pocket — a scene captured in a video circulated widely after the attack.

"Unfortunately, he didn't react," Minassian says of Lam, who was later widely praised for his non-violent handling of the arrest.

Minassian's lawyer, Boris Bytensky of Toronto, had argued for a publication ban on his client's interview with police and all other pretrial documents until the trial. Bytensky argued that allowing details to be published would taint potential witnesses, a position supported by the Crown. Ontario Superior Court Justice Anne Molloy disagreed and ruled in August to lift the ban.

"It is hard to imagine a witness being called who will not already know that Mr. Minassian drove a van down a Toronto sidewalk killing and injuring many people," wrote Molloy.

Molloy had delayed lifting the publication ban to give the defence time to file an appeal of her decision.

The families of those killed in the attack were given the chance to watch the video before its public release.

Nick D'Amico, the brother of Anne Marie D'Amico, said he's still trying to make sense of what he saw in the police interview. He also expressed concern about Minassian getting a platform to discuss his incel views.

"It just makes me feel a little queasy that all of a sudden now there's more of it out there," D'Amico said, noting his biggest concern is that it could influence others.

"I wouldn't want to have anyone hear it or see it and feel like that's OK to do in any way, under any circumstances — taking someone's life is just not OK," he said.

You can read more about D'Amico's reaction to seeing the video here.

Minassian has been charged with 10 counts of first-degree murder and 16 counts of attempted murder.

The Yonge Street attack claimed the lives of:

The trial for Minassian, who turns 27 in November, is scheduled to begin in February.