A Toronto mystery deepens: Was it a tunnel or a bunker?

There are many questions about a mysterious tunnel discovered near York University last month, including what it should be called.

First discovered Jan. 14, police want to know who built it and why 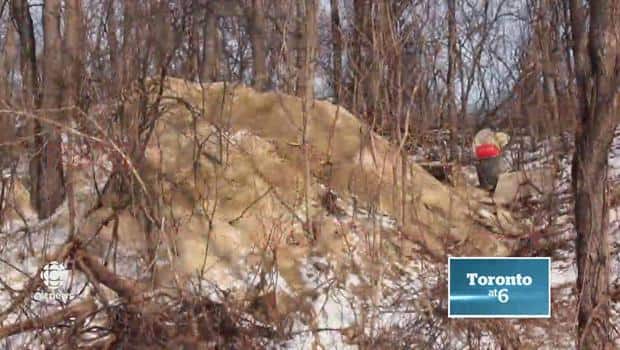 There are many questions about a mysterious tunnel discovered near York University last month, and most revolve around what the tunnel was intended for.

But as many in the city and beyond call it a tunnel, at least one security expert believes it may be more accurate to view it as a "bunker."

On Tuesday morning, Toronto police held a news conference describing the discovery of the structure on Jan. 14 and the investigation that followed.

Deputy Chief Mark Saunders said that a conservation officer spotted a large mound of dirt that day in a wooded area of Black Creek Parkland, near Jane Street, south of Steeles Avenue.

The conservation officer subsequently found that a piece of wood was covering a hole, with a ladder leading down to what Saunders called "the chamber" below.

Police were called to investigate.

Saunders said no one was found inside the chamber when police began investigating the 10.1-metre-long structure. It is 1.93 metres high and 86.4 centimetres wide.

"The individuals responsible for building it clearly had some level of expertise in ensuring its structural integrity," said Saunders.

A gas-powered generator was found in a hole a short distance away from the chamber, Saunders said.

Saunders said police also found moisture-resistant light bulbs, a sump pump, a portable gas can, work gloves, a wheelbarrow, as well as food and beverage containers. There was also a pulley system that Saunders said was "most likely" for removing dirt.

Police also found a rosary hanging from a nail, with a Remembrance Day poppy attached to it.

"I think we can classify it as a bunker, as opposed to a tunnel because it doesn't really lead anywhere and it's enclosed and the way it's constructed," Wretham told CBC News Network on Tuesday.

Time-consuming, but not professional project

John Harrison, a professor in the department of civil engineering at the University of Toronto, said it is clear the structure would have taken some time to construct.

But he said it is not an overly sophisticated structure.

"Literally, I think somebody has probably got some idea from the internet and decided that this is what they should be doing," Harrison told CBC News in an interview on Tuesday.

The structure is near both the edge of York University's Keele campus, as well as the Rexall Centre, which will host tennis events during the upcoming Toronto-hosted Pan Am Games. Officials have said the tunnel or bunker has not posed a threat the games.

CBC News has learned that police believe some of the materials used to build the tunnel were stolen from the Rexall Centre. This includes some parts of temporary bleachers used at last summer’s Rogers Cup.

Police have said they are seeking the public's assistance in determining who built the tunnel and the reason for its construction.

The police investigation is ongoing.

The Ontario government says the discovery of the tunnel will not have an impact on the upcoming games.

With files from the CBC's Charlsie Agro, Mike Crawley and John Lancaster