Caught on camera: Man chases dangerous driver after 911 puts him on hold

An Ontario man says he has ‘lost faith’ in the 911 system, after an operator put him on hold for six minutes while he frantically pursued a suspected drunk driver, careening down busy streets. An emergency call system expert says Canada’s 911 is outdated and in desperate need of an overhaul. 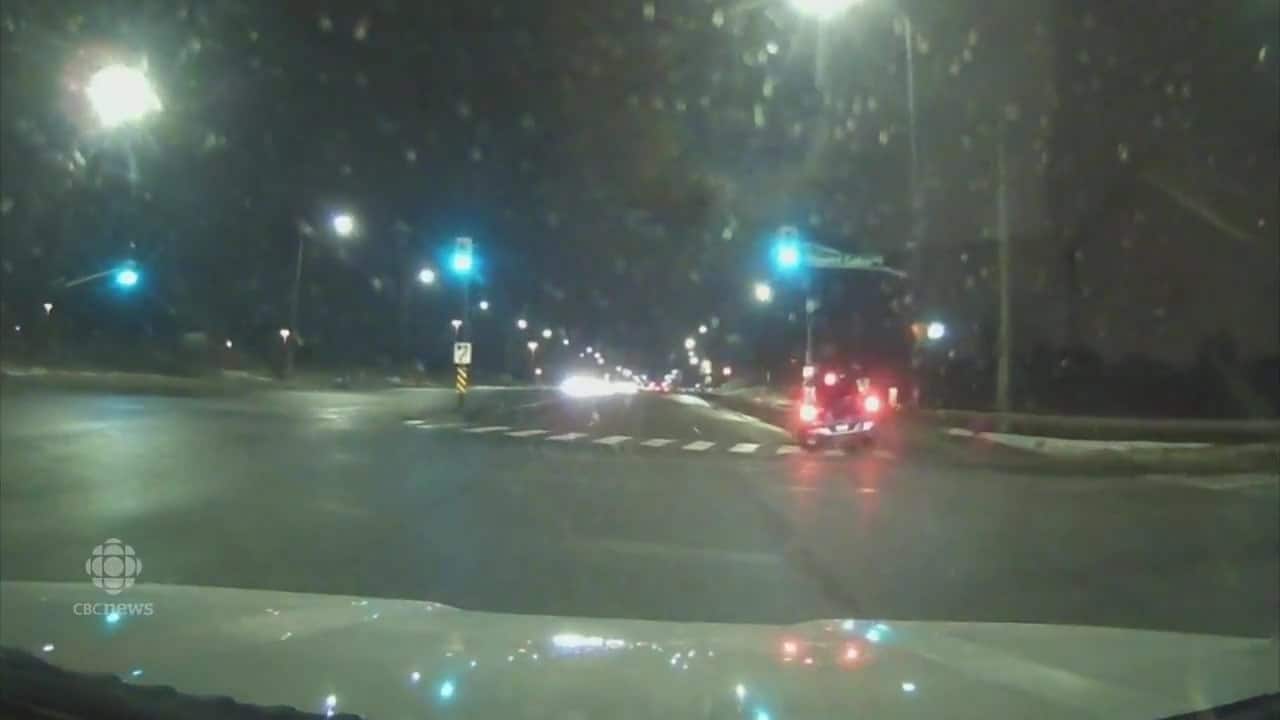 Sam Gill says he had a knot in his stomach as he watched a driver in front of him barrelling down a busy road in Mississauga, Ont., weaving in and out of oncoming traffic, jumping a curb and hitting a snowbank so hard the impact knocked his headlight off, though that didn't stop him.

When Gill dialled 911 for help, he was put on hold.

Just before 8 p.m. on a Sunday last month, Gill spotted the other motorist "driving erratically — can't stay in his lanes, can't maintain control of the vehicle."

"Every second that passed, I'm thinking, 'Oh my god, somebody is going to die," he said.

Canadians make an estimated nine million calls to 911 every year, taking for granted that someone will answer, says Holly Barkwell, the Canadian region director of the National Emergency Number Association (NENA), an international organization that works to improve 911 service.

"Unfortunately, that is not the case everywhere across Canada," she says. In reality, Barkwell says, the 911 system might not work as expected because it's fragmented, underfunded and operating on technology that's over 50 years old.

"It's been ignored too long. It's an issue of public safety."

There are no mandatory standards in Canada, but voluntary standards set by NENA in 2006 say 90 per cent of 911 calls should be answered within 10 seconds, and 95 per cent within 20 seconds.

But because there is no national oversight on 911 service, there's no way to tell how Canada measures up.

In Gill's case, he was on hold for almost six minutes (his phone was hands-free) while he chased the dangerous driver — honking and flashing his lights, trying to warn others to steer clear.

"At this point I'm saying to myself … if [911] doesn't answer, should I push him off the road? I might hurt him in the process, but I might save his life and potentially the lives of others," he said.

Peel Regional Police, which runs the 911 service in Gill's area, says it was swamped with double the usual number of calls at the time, adding it had a "record number" of calls in 2019, though an exact number wasn't available.

By the time an operator answered and police arrived, the driver had crashed into another snowbank and passed out behind the wheel, with his vehicle still in drive, Gill said.

He says an officer told him the man was drunk. Peel Regional Police wouldn't confirm that with Go Public.

Similarly, Helena Shepherd-Snider couldn't reach 911 when her husband had a heart attack in 2016. Instead, she got a recorded message saying the number was not in service, and to dial zero for the operator.

Initially, she says the operator refused to call for her, telling Shepherd-Snider she should do it herself.

"It felt like a double whammy. [I was thinking] where else can I go? What can I do? Time was of the essence," she said.

After about 15 minutes, she convinced the operator to call 911. She credits fast-working paramedics for saving her husband's life.

When the dust settled, Shepherd-Snider discovered everyone on her block — about half a kilometre outside Sudbury, Ont. — had 911 service except the last four houses including hers.

Depending on where you live, 911 is run by municipalities, the police or the province, while telecom companies are responsible for supplying the network needed to connect the calls — an example of how the system is fragmented, according to Barkwell.

When Shepherd-Snider called Bell and the municipality, she says they "passed the buck" — neither correcting the issue. Instead, Bell cut off 911 service to her neighbours. ]

The company tells Go Public that their block is outside Sudbury's service boundaries and that Shepherd-Snider's neighbours "had been erroneously provided with 911."

The city says those houses are a provincial responsibility and have separate emergency numbers for ambulance, fire and police.

The shortcomings of the 911 system were flagged back in a 2013 CRTC report and, says Barkwell, haven't changed. The report found:

One of the biggest problems, according to Barkwell, is that 911 services still use old analog technology, which makes it difficult to locate people using mobile phones.

She says mobile apps have a better chance of locating someone than 911.

"The biggest question I get from people often is how come Uber can find me and how come Domino's Pizza can find me but 911 can't find me?" Barkwell said.

A number of recent deaths have highlighted other problems with 911 services, and how they co-ordinate with emergency personnel.

B.C. is promising changes to its 911 system after a woman bled to death after waiting 35 minutes for an ambulance in Vancouver in 2018. An ambulance was dispatched promptly, but attendants were unable to reach her because the doors and an elevator in her building were locked, and firefighters were called in too late.

In Ontario, the deaths of four people in two separate incidents led to dozens of recommendations from the provincial coroner, and to a bill meant to address problems with 911.

"People have lost their lives and people will continue to lose their lives," said France Gélinas, the NDP MPP, who last year put forward Bill 75, which is currently before the social policy committee.

Gélinas says she doesn't believe the Tory government will pass the bill, however, and, when asked by Go Public, the provincial Ministry of Health wouldn't say. Spokesperson David Jensen said the government has established a task force to look at the problems with the system, including the coroner's recommendations.

Ontario does not have legislation to govern delivery of 911 service or to provide secure funding for it. Certain provinces, including Alberta, Saskatchewan, Manitoba and Quebec do.

In March, the CRTC introduced a plan to modernize 911 networks in Canada. As part of that plan, telecoms must upgrade from analog technology to digital by June 30, 2023.

It's a good start, says Barkwell, but doesn't address the many other problems like inconsistent or inadequate funding.

In the meantime, after his experience with the dangerous driver in Mississauga, Sam Gill says he worries what might happen to his family or others if there is another emergency.

"We've lost our faith and that's not a good feeling," he said.