Three years ago, Joan MacDonald weighed 198 pounds and was on daily medication. Today, the 73-year-old from Cobourg, Ont., is pill free and turning heads in the fitness world.

Joan MacDonald can now look in the mirror and feel confident in who she is and what she sees — stronger, healthier, and happier at 73 than she has been in decades.

It's stark contrast to three years ago when the Cobourg, Ont., resident was in a "very negative place" and despised being in photos.

Back then, she weighed close to 200 pounds and was prescribed daily medication for high blood pressure, high cholesterol and acid reflux.

She had previously had a tumour removed from her abdomen, underwent knee surgery, and had fallen down a handful of times. She also had progressive arthritis, and her relationships with family members were strained.

"I was very uncomfortable and unhappy. I would do anything to not be in a picture because if I had a picture taken, I'd hate it," said MacDonald, a retired public servant. 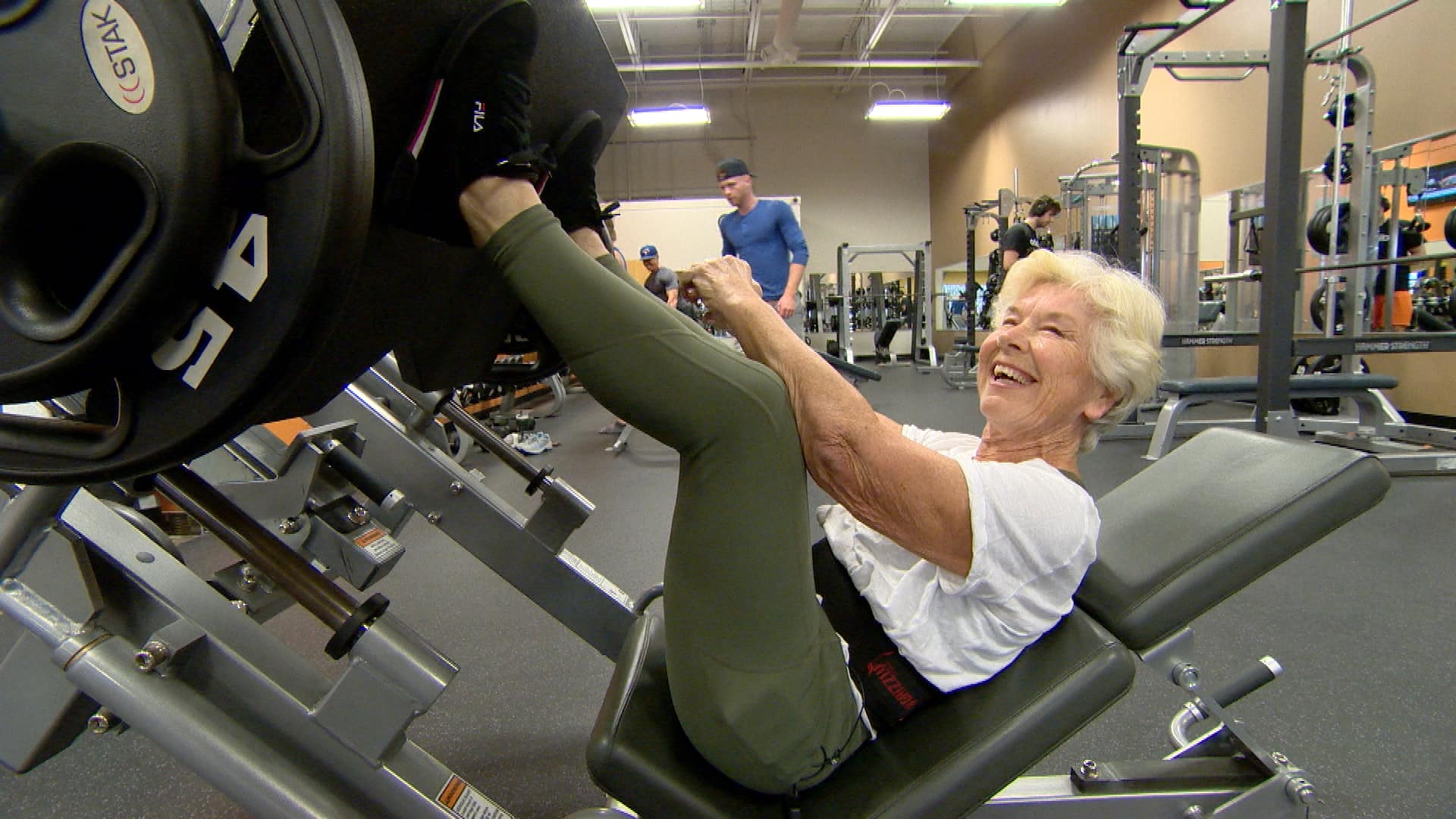 10 months ago
2:05
At the age of 73, Joan MacDonald of Cobourg, Ont., is now fit, happy and healthy. Three years ago, she decided to transform her life, and now she's on the cover of a fitness magazine. 2:05

She had a gym membership, but didn't exercise regularly and only worked out on machines she knew how to use.

A turning point came when doctors said she needed to increase her medication dosage.

"[My health] was going downhill on a slippery slope. I had lost control and it wasn't a good feeling," said MacDonald. "It had to change. I didn't want to end up in a nursing home like my mom did."

For years, her daughter Michelle MacDonald had been worried about her mom's mental and physical health.

It was Christmas 2016 when Michelle and her husband, professional bodybuilders who run a private gym in Mexico, visited her mother and were alarmed by her waist size.

"I was shocked at how she was deteriorating," said Michelle, who observed how difficult it was for her mom to use the stairs.

She decided to have a "tough talk" with her mom, and pleaded to have her join an online, six-month fitness program she was leading.

When her mother said she would, Michelle was shocked.

To help her get started, Michelle brought her mother to Mexico in January 2017, coached her on healthy eating, and taught her the proper form and techniques with gym equipment and free weights.

"It was very hot and humid. I'm telling you, I sweat buckets. It was really, really difficult," Joan MacDonald said.

Joan also learned how to use an iPhone and apps for training, meal planning and tracking progress.

When Joan returned home after two weeks, she continued following her daughter's instructions and reported every week to her online fitness group of 10 women around the world.

Every week, they discussed how they were doing and posted progress pictures — something Joan initially didn't like doing, but eventually saw how valuable it was.

Within six months, she was down 45 pounds and posing for the cover of a fitness magazine with her daughter.

Joan's initial goal had been to lose fat and keep it off, but as she continued exercising, she started to see muscle definition.

"People think that lifting weights [at my age] is terrible for your body. But the more you lift, the stronger your bones become. Why would you want to have soft bones?"

Joan admits she was sometimes ready to throw in the towel, but knew she had to keep at it if she wanted to see results.

"There were times I would get angry that something wasn't happening that I wanted to happen. I still had that anger in me for a couple of years. I'm getting rid of it slowly."

Now the @trainwithjoan account handled by Joan has more than 119,000 followers.

"It's remarkable that I can possibly influence people. It wasn't to gain notoriety, but it ended up that way," she said, adding she is an introvert and doesn't like being at the centre of attention.

"I do what I do and I don't think about being a [role] model. If someone wants to take it that way, that's great."

She's heard from people of all generations in areas of the world like Denmark, India, Germany, China, Africa and Chile.

Followers tell her they've shared her photos and videos with their mothers and grandmothers in hopes they'll catch the fitness bug.

"I would love to have more people change their lives from being sickly to stronger and capable of looking after themselves," Joan say.

Michelle, 48, says she thinks many women her age can relate to the hardship of seeing their mothers get older, being on medication and slowing down.

"To see her do a complete 180 and get her health back and then some, it's phenomenal. It's the best gift ever. I've got my mom back.

"Even in your 70s, you can grow muscle. It's beyond any expectation or inspiration."

Joan is becoming more comfortable posing for the camera.

Since her fitness journey began, she has appeared on several more magazine covers and even won a fitness competition.

But she cares most about being completely off medication and having a new lease on life. Her body, mind and relationships are much healthier.

"We're only here for a short time, so I want to make the most of it. I don't want to be what I was because I was slowly dying. Now I'm going to live."

Sixty-two pounds lighter than three years ago, she goes to the gym at least four mornings a week, with two days focused on cardio and different muscle groups for the other days, and eats five balanced meals daily.

She hopes sharing her story can inspire other women.

"If you've got bad health, you're not happy with the way you are or the life you're living, then start to take charge. Surround yourself with positive people who are going to back you," she says.