7 in hospital, 1 without vital signs after highrise fire

Seven people are in hospital after firefighters battled a three-alarm blaze that filled a Toronto highrise with smoke overnight Monday. 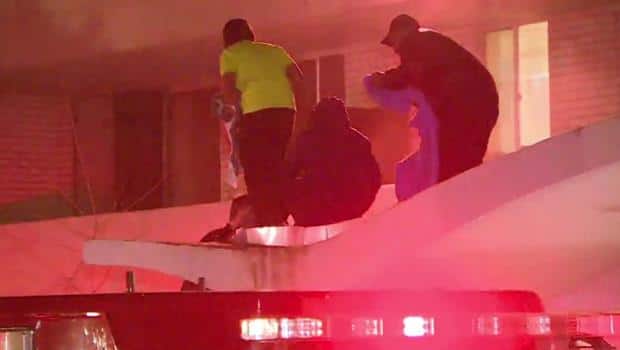 6 years ago
1:00
Three people, including a child, were rushed to hospital after a fire tore through a 2nd-floor apartment on Jane Street 1:00

Seven people are in hospital after firefighters battled a three-alarm blaze that filled a Toronto highrise with smoke overnight Monday.

Emergency crews were called to 2850 Jane St., south of Finch Avenue in the city's northwest, around 11:30 p.m.

The fire is not considered suspicious.

Among the injured were two adults and a young boy who were found unconscious in a stairwell. They were rushed to hospital. One of the adults, a woman, was found without vital signs. All three had life-threatening injuries and remained in critical condition.

The woman and boy were found in the building's west stairwell on the fifth floor, according to police. The man was found in the same stairwell, three storeys down. Four others were also taken to hospital with smoke inhalation, according to Toronto paramedics.

An elderly female managed to escape from the second-floor unit.

Initially, police had difficulty identifying the victims, but they have since found their names.

Screaming in the hallways

The fire began in a second-floor apartment and, according to officials, might have been sparked by a candle. High winds helped spread the fire while, inside, officials say some fire doors had been propped open, allowing smoke to spread more easily through the building.

"We started seeing smoke," one resident told CBC News. "Everybody started running down the stairs but we couldn't get past the eighth floor because the smoke was filling our lungs."

Many residents were told to go back into their units, block their doors with wet towels and wait the fire out.

Because the building does not have a public address system, fire crews went from floor to floor, alerting people of the situation with a bullhorn.

​"It was a hard fire," said Toronto Fire Services Division Cmdr. Danny MacIsaac. "When crews arrived on the scene, there was heavy smoke and flames coming from the second storey.

"We had a lot of people screaming in the hallways. There was a lot of smoke that migrated up through the apartment and heavy thick smoke on each floor and in the stairwells."

About 17 engines and support vehicles and 62 firefighters fought the blaze during the pouring rain, while police and paramedics used ladders to rescue several people stranded on balconies and from the roof of the building's lobby area.

With files from CBC's Linda Ward