Six generations of the same family are living in Ontario, following the birth of a baby boy on the weekend.

Baby boy is introduced to 4 generations of grandmothers 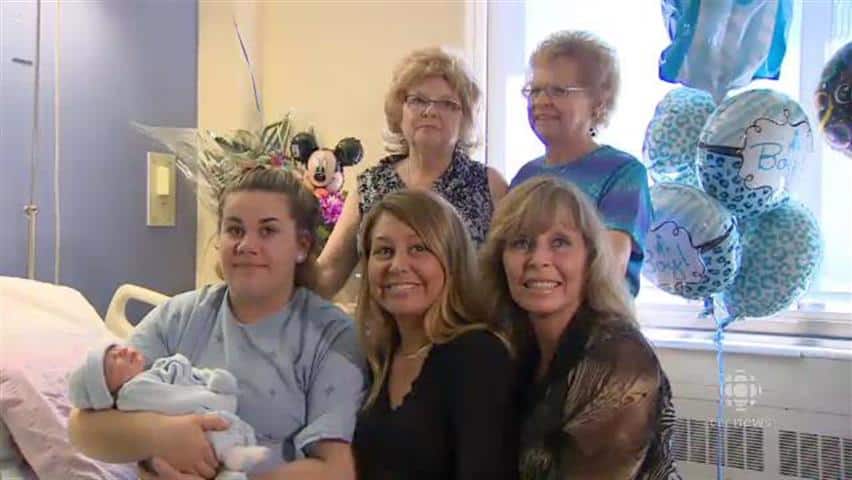 Priscilla Steiner has been telling people the same story for her entire life, which got even more amazing after she gave birth on the weekend in Mississauga, Ont.

Her day-old son, Ethan John Curtis, became the newest member of a very large family, which currently has six generations living on the planet at the same time.

"I don't even know how to describe it," Steiner told CBC News, when once again telling the story that some have found hard to believe over the years.

People have often presumed that Steiner’s mother is her sister and that her grandmother is the one who raised her. But they are wrong.

"They never believe it," said Steiner, 19, who has often had to spell out the story by counting out the generations on her fingers, in order for people to understand.

It's a rare scenario to have six generations of the same family inhabiting the Earth at the same time.

"If you have someone who has six living generations, they must have had their children at a very young age and it's just a really unusual thing," said Lorine McGinnis Schulze, a genealogist who told CBC News she has not come across another six-generation family during her career.

The youngest of 4 generations of grandmothers

Stephanie Steiner is the mother of Priscilla and the newly minted grandmother of Ethan.

Just 34 years old herself, Stephanie Steiner knows what it is like to be a very young mom, just like her own mother, grandmother and great-grandmother, who all had the chance to meet Ethan after he was born.

"Obviously, we had babies very young and I don’t recommend young people going out and getting pregnant," she said.

"However at the same time, we are so lucky that we have such a support and such a foundation of love," in the family that has grown so large over the decades.

Priscilla Steiner also said that coming from such a big family has had its advantages and expects more of the same for her son.

"It's pretty good, there's a lot of support, love," she said. "It's good for the baby to have a big, nice family."

With reports from the CBC's Lorenda Reddekopp, Steven D'Souza and Linda Ward