Rishi Sharma has spent more than three years travelling across the U.S. documenting the experiences of combat veterans. He's now come to Canada to continue his mission of speaking to every Second World War veteran.

Rishi Sharma has documented the experiences of more than 870 vets in the U.S. and now Canada

Sitting on an orange velvet chair in the middle of his living room in North York, 94-year-old Herb Pike is being scolded by a stranger 74 years his junior.

"Didn't your mom tell you if you smoke cigarettes you won't live until your 90s?"

"Well, you sure showed her."

The stranger is Rishi Sharma, a 20-year-old from California. He's setting up his tripod and Sony camcorder in front of Pike's chair to begin an interview. Pike — who is from Toronto — was a sergeant major with the 48th Highlanders of Canada in the Second World War. He fought in Italy, Sicily and Holland. 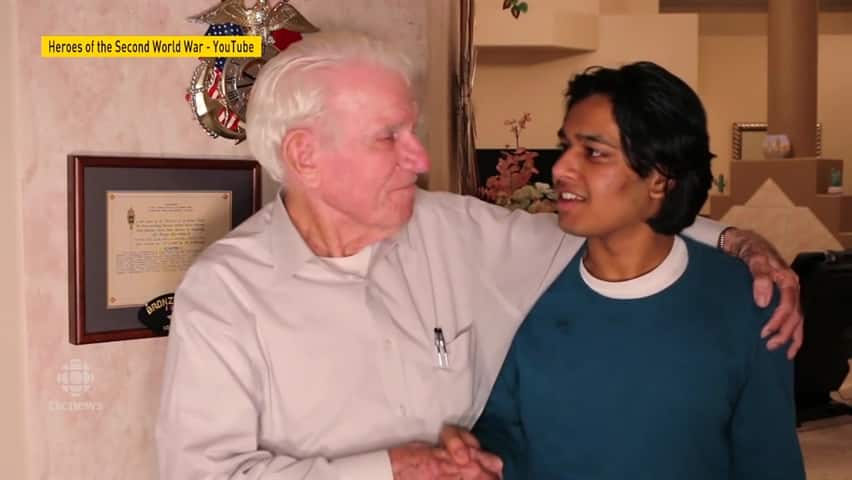 3 years ago
3:10
Rishi Sharma documents the experiences of combat veterans from the Second World War. 3:10

"What would you say was the closest you got to the German infantry in a firefight?

"It depends on who shot first," says Pike.

"There was the odd guy who had actual hand to hand fisticuffs or what not. It was surprising what you would run in to."

Sharma has spent more than three years travelling across the U.S. meeting combat veterans like Pike. To date, he said he's conducted more than 870 interviews in 45 U.S. States. He's come to Canada to continue his mission and says he won't stop until the very last Second World War veteran dies.

Sharma says he's been interested in the Second World War since he was a child. He'd pore over books, watch the History Channel and once aspired to be a marine. When he realized how easily accessible war veterans are, he began reaching out to them.

"To talk to a real life superhero, who went through the definition of hell, I could just call them. That's what hooked me. So I started riding my bike to the local nursing home and I started interviewing all those veterans," said Sharma.

Sharma says he soon found himself cutting class to travel to different retirement communities and homes to meet with more veterans.

Some of his interviews last an hour; some are upwards of four hours, according to Sharma. He says because he's not related to the veterans they are often more candid and feel like they can speak more freely.

"It's really a cathartic opportunity for the veteran to get these emotions out before they pass. Because it's very lonely when you're the only person with these thoughts in their head."

Once he's finished, Sharma makes a copy of the interviews for the veteran and the family. If they agree to make their interviews public, Sharma says he'll submit the material to be part of a museum. He posts some of the interviews online on a YouTube channel.

"How he lived his life, the sacrifices he made. the way he laughed, the way he cried, his jokes … We're giving them an opportunity to an eternal life."

Sharma funded the project out of his own pocket, but has started a non-profit to cover his travel. He said he sleeps in his car when he's on the road to save money and eats lots of cheap fast food.

Pike said he appreciates Sharma's mission and what he's doing for combat veterans.

"To us fellows, it's one helluva nice thing he's doing. Not letting the complete memory fade," said Pike.

"I just want to be remembered as a half decent guy who was willing to do his job and is extremely proud of his regiment."

Sharma is is meeting with veterans in Calgary, Vancouver and the Maritimes.

Before he left Pike's home, he asked the 94-year old for some life advice.

"Pay attention. Don't try to be a smartass. And when you're in the line, do what you're told," said Pike.

With files from Derick Deonarain