2 children in alleged Zimbabwe abduction back in Toronto

Two Toronto children allegedly abducted during a trip to visit family in Zimbabwe in April were reunited with their family last week after a multi-agency police effort.

'You made it possible to have my children for Christmas,' mother says to authorities 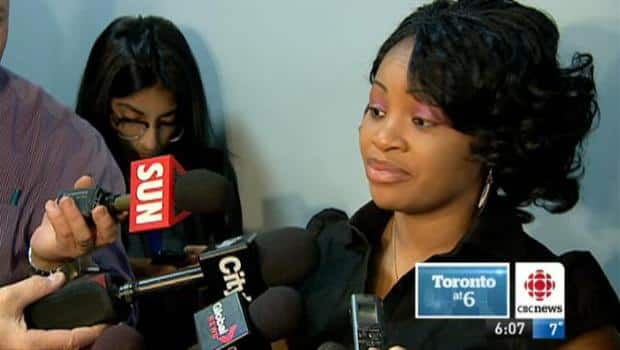 8 years ago
2:04
A Toronto mother is celebrating the return of her two young children. 2:04

Two Toronto children allegedly abducted by their father's family during a trip to Zimbabwe in April were reunited with their mother last week after a multi-agency police effort.

Toronto police said Biatria Muzabazi, the mother of Shane 4, and Renee, 7, came to them in September, saying members of her former husband's family in Zimbabwe had failed to return her children to Canada after agreeing to take them there for a summer.

Both children were born in Mississauga, Ont. Muzabazi is divorced and has sole custody of them.

In response to Muzabazi's complaint, Toronto police notified Canada’s Department of Foreign Affairs, the RCMP, Interpol and authorities in Zimbabwe.

The children had been enrolled in a boarding school in Zimbabwe, and police allege the school helped hide the children.

With the help of local police, the children were reunited with their mother at the Canadian Embassy in Harare on Tuesday and returned to Toronto on Thursday.

At a news conference Monday, Muzabazi expressed her gratitude to the authorities for their work.

"You made it possible to have my children for Christmas," she said. "Thank you very much. I never thought I was going to see my children again, the way things were going. I am so happy today to have them with me."

Shari Nebillis of the Toronto police said the case posed multiple challenges, particularly in dealing with an overseas government.

"It took almost four months … to get them home," said Nebillis. "I had several moments where I didn’t think the kids were coming home."

Toronto police Chief Bill Blair said Canadian authorities are continuing to investigate the case and are awaiting a decision from the attorney general on whether to press charges against the father.