After testing positive for COVID-19 on April 10, 100-year-old Viola "Mickey" Pollard says she can hardly believe she beat the virus.

Viola "Mickey" Pollard said she doesn't remember the symptoms she felt while fighting COVID-19, except that "everything bothered" her. It's much easier for her to articulate how she's feeling now, after beating the virus.

"I feel wonderful, just wonderful," said Pollard, who turned 100 last November, speaking on a video chat from her nursing home in Mississauga.

Moments before the interview, staff at Villa Forum Long Term Care Residence brought her to the front entrance to wave for a CBC News camera through the window. A worker fixed her hair before she smiled widely, waved and blew a kiss.

"I found out [I tested negative] and I was so happy to hear that," Pollard said. "That's a wonderful thing. I can't believe it, but it's true." 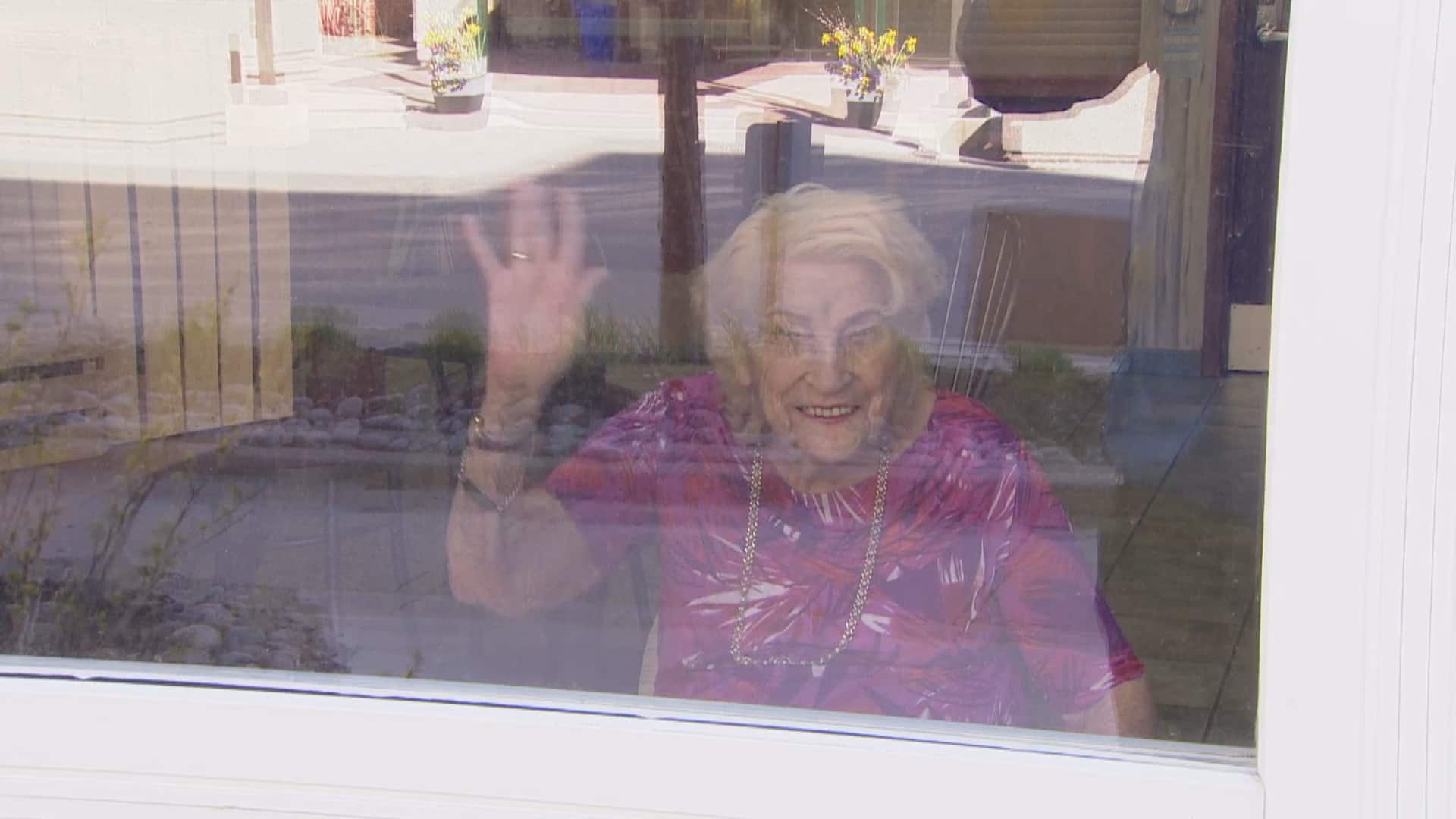 Pollard's daughter, Marilyn Sweeney, said the family was told April 10 that Pollard tested positive for COVID-19, which surprised and devastated them. Although they knew other residents at the home had the virus — 38 cases and nine deaths as of May 4 —  they didn't think Pollard would get it.

"She's so tough," Sweeney said. "My thought was, knowing her, she will get past this and not be a victim of COVID-19. She is a survivor."

After the diagnosis, Sweeney started imagining the worst-case scenario. The situation was difficult because she couldn't see her mother. Pollard battled flu-like symptoms for nearly three weeks and some days, was too ill to answer her phone when family members would call.

"I was really scared," Sweeney said.

Given Pollard's age, Sweeney didn't think her mother would make it. But she was surprised, once again, when she found out last Wednesday her mother had tested negative for the virus.

"I'm so in awe of her. We are all in all of her that she made it. She's an amazing woman. She's a fighter."

A strong spirit and good hair

Pollard is considered the star of her family and the life of the party at Villa Forum, where she's lived for eight years.

"She's always looking to socialize, always cracks a joke," Celia Lisi, the home's administrator said. "She loves to be around people and is always willing to help."

Pollard enjoys bingo and has organized fundraising for the nursing home. Lisi said in the early days of the pandemic, Pollard was quick to remind her fellow residents to follow the health and safety protocols.

"She has a very strong spirit and she's hilarious. One of the funniest people I've ever met is my mom," Sweeney said, adding she has no problem sharing her opinion and enjoys attention.

Pollard is known for keeping up her appearance — especially her hair. She's a bit concerned the nursing home's in-house salon isn't operating during the virus.

"I'm always worried about my hair. All the time. Sometimes I don't have it just right and it gets me mad, like today, I just wanna chop it off," she said with a laugh.

Pollard always wears lipstick and is particular about her clothes. She prefers bright-coloured outfits, which she matches with a beaded necklace.

"She really puts effort in and I feel that she's taught me that," Sweeney said. "According to her, you never know what you're going to run into."

"It just stuck," Sweeney said. "Her mom always sang that song to make her feel better and from then forward she liked Mickey better than Viola."

Pollard is the great-granddaughter of Francis Henry Medcalf, Toronto's 16th mayor and has lived through the Great Depression and the Second World War.

She left school after Grade 7 to work in factories to help support her family. She eventually married her husband Bill and raised five children while caring for her uncle and blind brother.

Pollard has outlived all six of her siblings, three of her children and her husband.  She joined him at Villa Forum for one year before he died in 2013. Sweeney said they would spend time in his room and listen to music.

Sweeney credits her mother's recovery to the staff at Villa forum and Pollard is just as grateful.

"I've  met some wonderful people here and they just treat me nice," she said.

Pollard said her advice to keeping healthy is to not overeat and waste food, something she said her mother taught her.

"Just take enough and don't put something on your plate you're not going to eat," she said.

When asked what the biggest lesson Sweeney has learned from her mother, her answer: resilience.

"My mom has gone through so much in her 100 years," she said. "My mother has held her own and she gets through those times. When we fall apart she's the rock."

Angelina King is a reporter with CBC Toronto where she covers a wide range of stories. She has a particular interest in crime, legal and justice issues and human interest stories. She previously reported on national and international news. Angelina got her start in her home city of Saskatoon where she spent much of her time covering the courts. You can contact her at angelina.king@cbc.ca or @angelinaaking