A tornado blew out windows, tore up fences and sheared off the tops of homes, but caused no serious injuries when it ripped through the central Ontario community of Angus on Tuesday evening.

State of emergency declared in central Ontario township, thousands without power around province 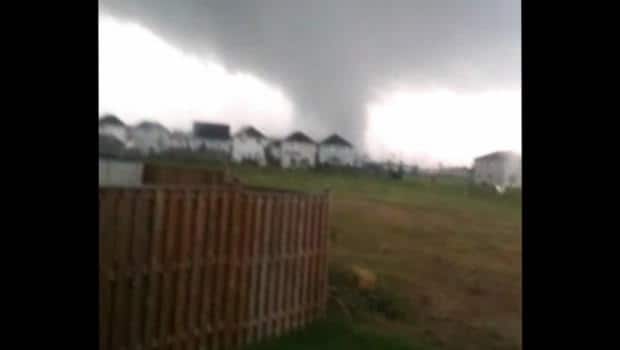 6 years ago
4:00
Tina Forget describes seeing a tornado touch down right in front of her in Angus, Ont. 4:00

A tornado blew out windows, tore up fences and sheared off the tops of homes, but caused no serious injuries when it ripped through the central Ontario community of Angus on Tuesday evening.

Police said at least 20 to 30 homes sustained "significant damage" in the community about 100 kilometres north of Toronto, but residents said there was widespread relief that no one appeared to have been badly hurt in the storm.

"I think people are very shocked by what has happened, which is totally understandable. They are relieved that nobody's hurt besides scratches and things like that," said Coun. Keith White, whose ward saw the worst damage.

Hundreds were left homeless by the storm, though there appear to have been no serious injuries.

Ontario Provincial Police Sgt. Peter Leon told CBC News he hasn't heard that anyone suffered a life-threatening injury as a result of the storm.

"We do not have any significant injuries," Leon said.

Leon said officers were going door-to-door in the affected area to make sure no one was trapped or injured.

Environment Canada later confirmed the storm had included a tornado, rated EF-2 on the Enhanced Fujita scale, which measures tornado intensity on a scale from zero to five. The storm had winds of about 180 km/h, according to the weather agency.

Videos of one or more twisters, reportedly shot in the area, had circulated online earlier in the day. There were also unconfirmed reports of tornadoes near Hanover and Walkerton.

Tina Forget was driving home just ahead of the storm’s arrival in Angus.

The skies were dark. Forget had heard about the warnings and was simply trying to get home safe.

“I arrived at this house about five minutes before it did what it did, so I was on the road with my kids just before this,” Forget told CBC News in a telephone interview.

From inside her home, Forget said she saw “a bunch of clouds just starting to come together very, very fast and start swirling together.”

They seemed to be coming toward her home, but ended up veering away.

“It was coming pinpoint to the house and then sort of I guess blew off a little bit to the left and just missed us. And it was just really, really frightening,” Forget said.

CBC's Charlsie Agro was en route to Angus, Ont., where there were reports of possible tornadoes that touched down, roofs ripped from homes and trees uprooted. Travelling northbound on Highway 400, Agro said rain was "pounding down" and that several cars, including a police cruiser, were forced to pull over because of the heavy rain.

Environment Canada had issued tornado warnings for several communities in the area as a line of severe thunderstorms with embedded tornadoes moved into the Lake Simcoe region.

Environment Canada says the storms were bringing wind gusts of over 100 km/h and large hail was likely.

Leon said OPP and Barrie police officers, as well as firefighters and paramedics were making sure residents were OK.

"The primary focus right now is addressing those homes where we have individuals that could be still in a residence — we want to make sure that nobody's trapped."

Leon said power was out in much of the area and it wasn't known when electricity could be restored.

The Township of Essa, in which Angus is located, declared a state of emergency on Tuesday night, which allowed for extra resources to be brought in to deal with the storm's aftermath. The damaged homes were in a relatively new subdivision in the south end of Angus.

A command post was being set up in a nearby high school and town officials were looking into the possibility of housing displaced residents in a community arena for the night.

The storms caused damage and knocked down power lines in other communities across Ontario.

Hydro One said 46,800 of its customers were without power Tuesday evening, while in Toronto, some 12,000 were in the dark due to "extensive" storm damage according to Toronto Hydro.

By midnight, Toronto Hydro reported it had restored power to 6,000 of those customers, while Hydro One said there were still 35,000 customers remaining without power overnight.

Toronto Hydro said the power should be back on for 75 per cent of its customers by Wednesday morning, and for 90 per cent by noon.

In Markham, north of Toronto, thousands are without power while crews work to free some 20 vehicles trapped by downed power lines and poles near Warden Avenue and Denison Street, according to the utility company PowerStream.

The downed poles caused "one minor injury" according to the company. The trouble is expected to be cleared and power restored by about 1 a.m.

Toronto's Pearson International Airport, Canada's busiest and largest airport, warned in a tweet that heavy rain, high winds, and lightning "may affect flights this evening." The airport has implemented a "ground delay program," meaning flights scheduled to leave between now and 11 p.m. are expected to be delayed for an average of about 63 minutes owing to the weather.

The storm was part of the same weather system that spawned two deadly tornadoes in Nebraska yesterday, killing two people, including a child.

Earlier in the day four people were struck by lightning while playing golf at a Whitchurch-Stouffville, Ont., course, York Regional Police said. All four were transported to a local hospital. Three are in stable condition with one reported to be in critical condition.

Environment Canada warned people to be vigilant around lightning, saying up to 10 Canadians are killed by lightning yearly.

The two tornadoes that tore through northeast Nebraska, killing a five-year-old, touched down within 1.5 kilometres of each other and destroyed more than half of a small town of roughly 350.

With files from CBC's Charlsie Agro, Shannon Martin and The Canadian Press