A funeral carriage pulled by horses led a procession through Halifax's downtown streets Saturday evening as the city, a mecca for people with a stake in the Titanic's history, remembered the doomed liner's sinking 100 years ago.

Memorials unfold around world, on land and sea, to mark 100 years since the disaster 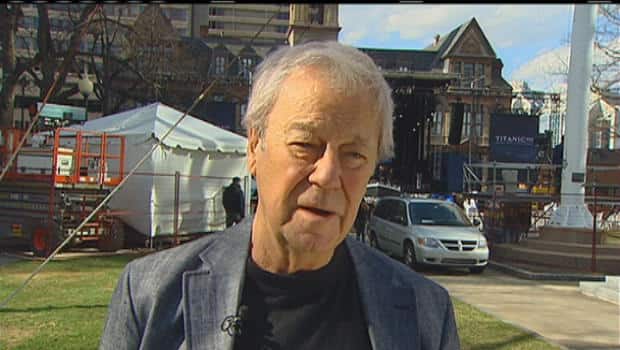 A funeral carriage pulled by horses led a procession through Halifax's downtown streets Saturday evening as the city, a mecca for people with a stake in the Titanic's history, remembered the doomed liner's sinking 100 years ago.

The wail of bagpipes filled the air as a line of hundreds of people, some of whom were carrying candles and wearing period costumes, followed the hearse.

Halifax is the final resting place for 150 of the ship's victims.

Thomas Hodgson said he travelled from Sydney, Australia, because he wanted to take part in an event that has touched the lives of people around the globe.

"You only really have to be here to realize how tragic and terrible it was," said Hodgson, a lawyer. "It affects the whole world like 9/11," he added, referring to the hijackings of four U.S. airliners on Sept. 11, 2001.

The Halifax procession made its way to the Grand Parade, a public square in front of city hall, where music from the era played and Canadian actor Gordon Pinsent told the ill-fated ship's story.

"People marvelled, not just on hearing of the Titanic's sheer size, but on learning of her grand opulence," said Pinsent, who wore a white scarf and black tuxedo.

"She was a sight to behold — massive and majestic, shiny and sleek. Everyone wanted to be part of her maiden voyage to America."

The Halifax commemoration was one of several events held around the world and at sea to mark the grim anniversary.

On Saturday afternoon, passengers aboard the Titanic memorial cruise ship Azamara Journey reached the site of the marine disaster and will lay a wreath where the legendary vessel sank.

The Azamara Journey left New York on April 10 carrying history buffs, many dressed in period costumes. They stopped in Halifax on Thursday to visit a cemetery where 121 Titanic victims are buried.

Human remains may be embedded in the mud of the North Atlantic where the New York-bound Titanic came to rest when it sank 100 years ago, a U.S. federal official said Saturday.

A 2004 photograph, released publicly for the first time to coincide with the disaster's centenary, shows a coat and boots in the mud at the legendary shipwreck site.

"These are not shoes that fell out neatly from somebody's bag right next to each other," said James Delgado, the director of maritime heritage at the National Oceanic and Atmosphere Administration.

The way they are "laid out" makes a "compelling case" that it is where "someone has come to rest," he said.

Filmmaker James Cameron, who has visited the wreck 33 times, told The New York Times that he had seen "zero human remains" during his extensive explorations of the Titanic. "We've seen shoes. We've seen pairs of shoes, which would strongly suggest there was a body there at one point."

Another ship retracing the route of the Titanic, the MS Balmoral, set sail from southern England on April 8, joined the Journey for memorial services, 640 kilometres off the coast of Newfoundland.

Late Saturday afternoon, the Canadian Ice Service announced it paid its respects to the victims of the Titanic. One of the planes that patrols the waters off Newfoundland flew over the site of the wreck, dropping a wreath and rose petals from the plane.

The U.S. Coast Guard had planned to twin the fly-over with the Canadians, but that flight got called away to another rescue.

Kathy Corson of Hamilton said her mother and a number of siblings had planned to travel on the Titanic during its ill-fated maiden voyage, but they ended up waiting for the next ship to leave from Southampton, England.

Corson, speaking to CBC's John Northcott on Friday at the Maritime Museum of the Atlantic in Halifax, said her mother would have celebrated her 13th birthday on April 13, a day before the Titanic started sinking.

"She was going to come over on the Titanic with her sisters and her older brothers. When one of the brothers came down, he wanted to take them first-class because they had lost their parents," she said.

"But they couldn't get enough tickets, so they waited for the next boat to come over."

The centenary of the disaster has been marked with a global outpouring of commemoration and commerce. Events have ranged from the opening of a glossy new tourist attraction telling the ship's story in Belfast to a 3-D re-release of James Cameron's 1997 romantic epic Titanic, which awakened a new generation's interest in the disaster.

Helen Edwards, one of 1,309 passengers aboard the Balmoral, said the story's continuing appeal was due to its strong mixture of romance and tragedy, history and fate.

There are "all the factors that came together for the ship to be right there, then, to hit that iceberg. All the stories of the passengers who ended up on the ship," said Edwards, a 62-year-old retiree from Silver Spring, Maryland.

"Romance is an appropriate word right up until the time of the tragedy — the band playing, the clothes. And then there's the tragedy."