'Everything I've ever hoped it would be': Ontario retreat for people with disabilities re-opens

Users of a unique wilderness retreat in northwestern Ontario which is fully accessible to people with physical and other disabilities say they're thrilled it's open again after nearly shutting down for good.

Users of a unique wilderness retreat in northwestern Ontario which is fully accessible to people with physical disabilities say they're thrilled it's open again after nearly shutting down for good.

The Wilderness Discovery Centre on Lake Shebandowan, located less than 100 kilometres west of Thunder Bay, wrapped up its first full summer of bookings after starting to take a few guests toward the end of 2018. The soft opening followed roughly a three-year period when the land on which the resort sits was nearly sold off, until several community groups stepped in.

For people like Tracy Hurlbert, a Thunder Bay woman who has multiple sclerosis and uses a wheelchair, the reopening was welcome news. She said she  went every year it was open since 2003.

"It was a big loss those few years that we weren't there," Hurlbert said.  "I really felt it in the summertime."

Being able to do things that many people take for granted at camp, like swimming, is important, Hurlbert said.

"I can't do that unless I'm at Wilderness Discovery, I can do that there," she said. "I can't go in a canoe, I could out there  because they have a special lift to get me in the canoe."

"I can do all the little things that other people take for granted, I can actually do out there, including going down to a beach."

The camp effectively shut down in 2015 when HAGI Community Services for Independence, which ran the resort since the mid-1980s, let its lease on the two-and-a-half hectares of Crown land on a sand point expire, citing the high cost of operating the facility and the repairs required to fix and upgrade the cabins.

The province wanted to sell off the property, but clients and a local citizens group lobbied the former Wynne government to reconsider.

In 2017, a new not-for-profit corporation was established, consisting of Thunder Bay-area Rotarians, Kinsmen, the Lake Shebandowan Campers Association as well as HAGI, now under new management. The new entity, called the Wilderness Discovery Handi-Capable Centre, purchased the resort land from the province in 2017.

Now, the not-for-profit's volunteer president, Bob Hookham is also doubling as project manager, spearheading the six-figure renovations needed on the property.  He's doing everything from replacing the decks and siding to gutting the cabins themselves, fixing water damage and renovating the interior to make it more modern.

"It's amazing you know, in a forest setting like this — and they were well-built, don't get me wrong — but the amount of deterioration that happened is phenomenal," Hookham said

"It is everything I have ever hoped it would be," Hurlbert said of the work so far. "It's like utopia, it was so beautiful."

Several cabins are finished, Hookham said, and are being rented out while work continues on the other units. The organizations have fundraised much of the money needed for the renovations.  Small and large businesses have also chipped in with donations, Hookham added.

The cabins are geared for people with a variety of physical disabilities and feature wide doorways, specialized beds, roll-in showers, kitchens and living spaces configured for wheelchairs, grab bars and not a stair in sight.

The property is similarly accessible with a long ramp winding down a 10-metre hill to the lakefront, where the beach and docks are set up with wheelchairs in mind. 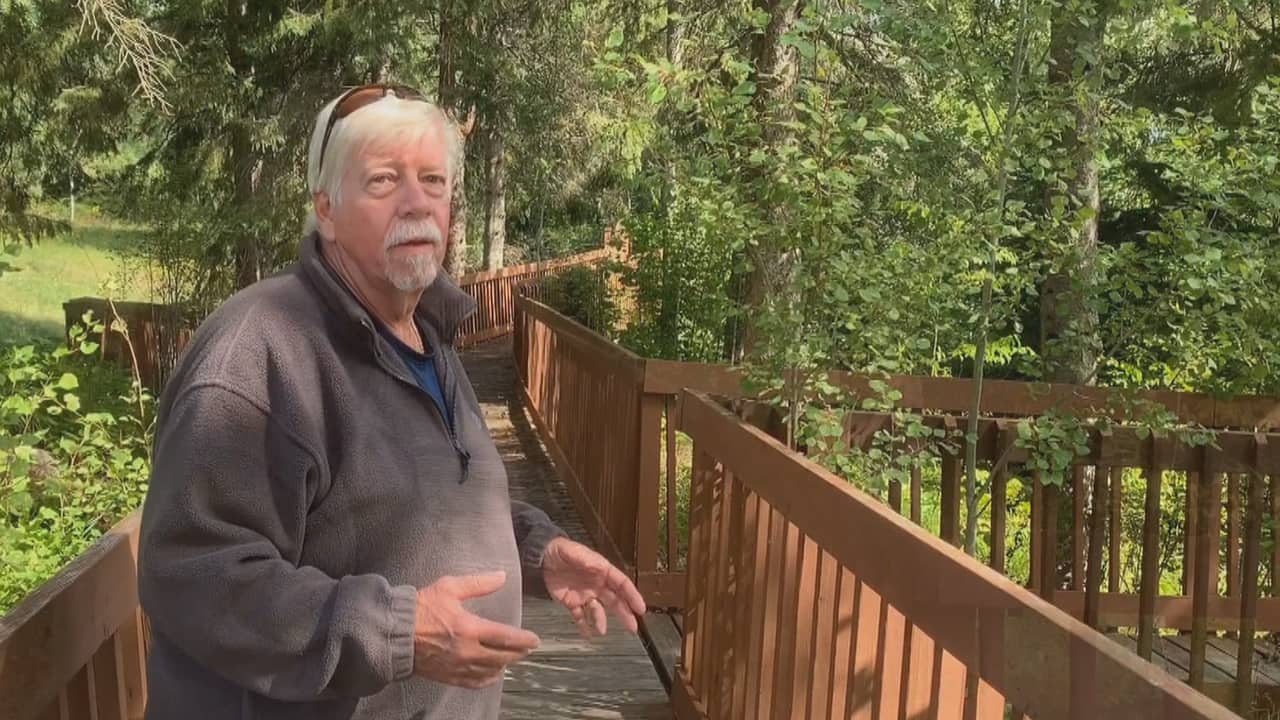 The large, custom-built pontoon boat allows wheelchairs to roll right on Hookham said, which means people who can't step into a boat still get to enjoy time on the water.

"A person strictly bound to a wheelchair can't get into a fishing boat, it's impossible, and depending on their mobility, being able to roll into a feature like this allows them to go for a boat ride ... or an all-day fishing experience," he said.

The resort also has had a specialized sling lift that allows people who normally can't swim the opportunity to splash around in the water. Hookham said a new apparatus will be in place for the summer of 2020.

"That will pick a person up out of a wheelchair and drop them into a fishing boat ... or it can drop them into the water to go swimming or paddle around with family members," Hookham said.

Hurlbert recalled one year when she was at the Wilderness Discovery Centre, there was a young boy with muscular dystrophy "and they put him in the water in the sling ... and he got to sit in the sling in the water up to his neck and just splash people and be a 12-year-old jerk," she said laughing.

"Which is wonderful because 12-year-olds are supposed to do that."

For retired U.S. Army sergeant Robert Duke, a trip to the Wilderness Discovery Centre is a chance to get away and enjoy some peace and quiet. Duke was diagnosed with spinocerebellar ataxia, a genetic disorder.  The strain he has will eventually kill him as it will cause the deterioration of his entire body, except his heart and lungs.

Duke can still use a cane to walk for short periods but also requires a wheelchair. He's been coming north to visit the Wilderness Discovery Centre for about five years.

"Being in a quiet place, 'cause I'm, like I said, I'm military, I've had two deployments overseas and I get to come to a quiet place and go look over the water and all of a sudden there's a beautiful eagle flying above or you know, you see a bird swooping down and getting some fish out of the water," he said.

"It's sad that I have to drive 18 hours to get [here] but I get to meet Canadian people that have the same issues I have."

Duke was visiting the Wilderness Discovery Centre in September with several other U.S. veterans, some physically wounded, others mentally. He said something as simple as the layout of the kitchens in the cabins makes all the difference.

"Who can't cook scrambled eggs?" he said. "Well, when you can't put your feet underneath the stove, how are you going to get to the stove?"

Work continues, not only on the cabins, but on some new buildings to be used as staff quarters.  Hookham said he would like to be able to hire a couple of people to manage the wilderness retreat. Currently, he said he and his wife Linda do it as volunteers.

Upgrades are also planned on the large ramp that accesses the beach and lake to make it more appropriate for people with visual disabilities.

Hookham said he's pleased with how things have gone so far, and is happy to hear the positive feedback from guests.

"You know that puts it all in one word."