Fall generally signals a slowdown in the forest fire season in Ontario, and with over 1,200 fires scorching the province in 2018, the slowdown is welcomed by many.

Dryden base one of two in Ontario where tankers, aerial suppression based

Fall generally signals a slowdown in the forest fire season in Ontario, and with over 1,200 fires scorching the province in 2018, the slowdown is welcomed by many.

One of the fires to grab headlines this summer was Parry Sound 33, a fire that forced homeowners and cottagers from their properties, while the fire raged through much of July and early August.

Many heard the accounts of property owners and firefighters working on the ground but another group — those who launch air attack in the province — went largely unheard.

CBC News was able to shadow an air attack crew, stationed at one of Ontario's two fire bases. The northwest region, based out of Dryden and the northeast region in Sudbury, are the two locations for tanker planes, or water bombers, to be based.

Mike Towill, a First Officer on the CL-415, one of nine tankers in Ontario, said depending on the severity of the fire conditions, a crew may have their alert period start at 9 a.m. or 1 p.m. Once on alert, the crew cannot leave the base, and must be ready to head out to any forest fire, generally within ten minutes of the call. 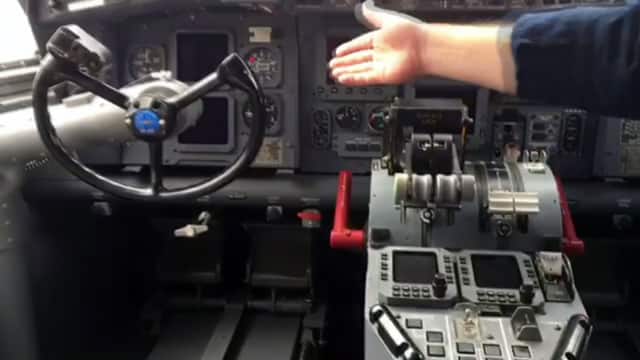 Take a look inside a waterbomber

The tanker captain and first officer though, are just a small piece of the air attack puzzle, which also includes a Bird Dog aircraft, and generally a helicopter and ground crew.

When an alarm goes off at the Dryden fire centre, the planes take off, heading on a specific bearing and distance. More information is given to the pilots once they are in the air.

Pilot Sean Gallant and Air Attack Officer Josh Leatherdale made up the crew in the Aero Commander based out of Dryden. For Leatherdale, it is his first year in the role.

The ride to the fire, known as Fort Frances Fire 52, although over 40 nautical miles away, takes less than 20 minutes to fly to. A small plume of smoke is seen on the horizon.

The Bird Dog is the first plane to arrive at the fire, surveying it at a high, and then low level. An Aero Commander skims the trees, just a few hundred feet high, to get a close look at the fire to estimate its size, intensity, as well as looking for any people or valuables in the area. 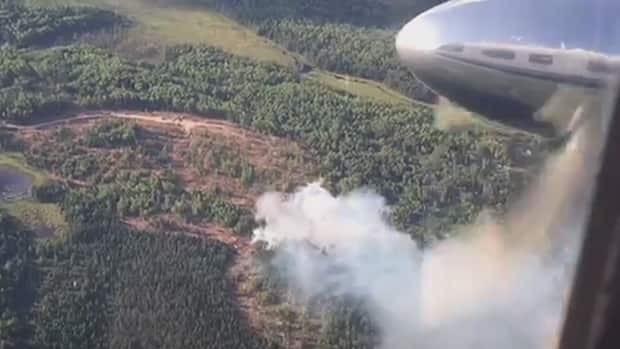 Water bombing with the MNRF

The aircraft's safety system chirps, "pull up, pull up" and "terrain, terrain" telling the flight crew about their proximity to the ground. Although unnerving, this is part of the daily routine for air attack pilots.

After skimming the trees, the Bird Dog climbs above the fire and circles, sometimes for hours on end, directing tankers to drop their water, and ensuring the tankers hit the "bullseye."

Towill said the Bird Dog is essentially the choreographer in a well-orchestrated play.

"Then once the crews are on the ground, the Bird Dog will help direct the tankers and the crews to stay out of each other's way, so we don't drop water where we're not supposed to," he said. "As well as the Air Attack Officer on the Bird Dog will pick our targets for us, and create the game plan on how to best manage the fire."

Not every fire gets aerial suppression. The Regional Duty Officer, based in Dryden, makes a determination about every fire.

Many on the day CBC News was at the base, were referred to as BOBs, or 'being observed.' The duty officer makes the determination if a fire is threatening to people, values, properties as well as other risks, and can decide to either fight the fire, or let it run its natural course.

Towill and his captain will work from Apr. 1 through Oct. 31 on a 10-day-on, four-day-off rotation. While he has landed his "dream job," he said it is difficult to be away from home for long periods, and also to not know where he will be stationed on a regular basis.

Planes and crews are shuffled around Ontario to forward attack bases, depending on the severity of fires and the need throughout the province.

So far, over 1,200 fires have burned across Ontario, more than double the  2017 fire season. The fire season officially ends Oct. 31.