First Nations call for RCMP to take over investigations in Thunder Bay, Ont.

First Nations leaders say it's time to disband the Thunder Bay Police Services Board and bring in the RCMP to investigate the deaths of Indigenous people in the northern Ontario city.

First Nations leaders say it's time to disband the Thunder Bay Police Services Board and bring in the RCMP to investigate the deaths of Indigenous people in the northern Ontario city.

Two Indigenous teens — Josiah Begg and Tammy Keeash — were found dead this month in the McIntyre River in Thunder Bay, close to where the body of Stacy DeBungee was found in 2015.

"The recent losses of Tammy Keeash and Josiah Begg have once again confirmed the inability of the Thunder Bay Police Service to conduct competent and credible investigations into the epidemic of deaths of NAN and Treaty 3 community members in Thunder Bay's rivers," the chiefs said in a joint statement issued Wednesday. 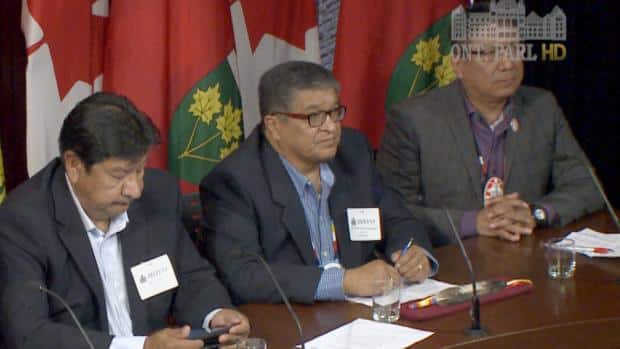 4 years ago
1:41
Express no confidence in local police service to investigate Indigenous deaths 1:41

The flawed investigation into DeBungee's death prompted an investigation by Ontario's civilian police oversight body, which launched an unprecedented systemic review of Thunder Bay police last fall. It's examining allegations of racism in the way the force deals with all Indigenous deaths.

On Monday, First Nations leaders sent a letter to the Ontario's Ministry of Community Safety and Correctional Services, requesting that the RCMP be put in charge of the investigations into the deaths of Begg, Keash and DeBungee.

The RCMP does not generally do front-line policing in Ontario, but provincial police had previously declined a request to take over the DeBungee investigation, citing the ongoing systemic review as a barrier to their involvement.

A letter was also sent from the First Nations leaders to the Ontario Civilian Police Commission, the independent oversight agency for police services boards, asking that an independent administrator be appointed to run the Thunder Bay Police Services Board.

The commission has already begun an investigation, according to a letter of response, from its executive chair, that's dated May 30.

Brian McKinnon, vice-chair of the Thunder Bay Police Services Board, said in a statement issued Wednesday morning that the board takes "issue with some of the factual assertions" being made by the First Nations leaders.

"A police service cannot cure systemic racism," McKinnon said in the statement. "We accept that our service has a role to play. The board and the service continue to support and participate in the ongoing [Office of Independent Review Director] review."

Neither McKinnon nor board chair Jackie Dojack returned calls from CBC News last week when questions were raised about the integrity of the police service after criminal charges were laid against police Chief J.P. Levesque.

The charges of breach of trust and obstruction of justice are unrelated to the ongoing systemic review.

"I support Chief Levesque 100 per cent, I know he's going to come out of this okay and that's all I'm going to say," Hobbs said.

As for concerns about the way police investigate Indigenous deaths, Hobbs said, "the police and the community, we can't be everywhere. We can't babysit these children, but we need to babysit them obviously. We need to need to get measures in place to keep the kids away from the rivers first and foremost."