A loud explosion that shook houses in a semi-rural part of Thunder Bay, Ont., Wednesday evening may have been caused by a meteorite that landed on the outskirts of the northwestern Ontario city, according to local police.

A loud explosion that shook houses in a semi-rural part of Thunder Bay, Ont., Wednesday evening may have been caused by a meteorite that landed on the outskirts of the northwestern Ontario city, according to local police.

Patrol officers were dispatched to the area of Highway 61 and Mount Forest Boulevard Wednesday around 11 p.m., to investigate, police said in a written release.

They were called by area resident Linda Pohole, who lives near the Mount Forest subdivision. She said she heard an explosion.

"I called it in thinking that something happened in Mount Forest, and maybe a house exploded," she said. "It was that loud, and my son said he felt the house vibrate."

Police searched the area and found a large, round hole in the snow on the side of the Highway 61, in the area of Mount Forest Boulevard. There were no footprints or vehicle tire tracks in the vicinity.

Police said the hole was almost a metre wide with a pile of "rock-like-substance" in the centre.

Kissin said when he arrived, he found the impact site, but no meteorite. He said the hole looked as though it was caused by a meteorite crashing to Earth.

He thought police officers had removed the space object, but Thunder Bay police told CBC News they don't know where the meteorite is, and are looking into it.

Lakehead University told CBC News the geology department hopes whoever picked up the meteorite will contact the university. Police did sign over a small bag of dirt and rock to the school after Kissin visited the site. 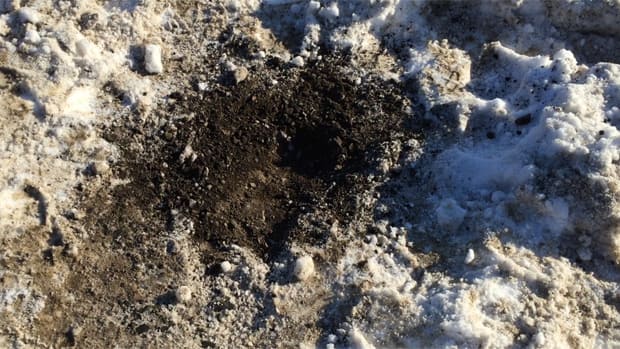 "This would be the first recorded meteorite fall in northern Ontario, because this is a terrible place to look for meteorites," Kissin said.

The size of the region, its harsh terrain and sparse population makes it rare for anyone to actually see a meteorite landing, he said.

"In this business, we talk about finds, where something's been sitting out there for a long time, or falls, which are a lot more interesting because, of course, they're fresher," he said. "And also if you're looking at the whole picture ... they give you an idea of the actual flux of what different kinds of meteorites are coming in."

The loud boom could be indicative of a larger object that broke up, Kissin said, meaning there could be other fragments in the area.

There was some speculation from police that the meteorite may have been part of the Geminid meteor shower, which peaked Wednesday night.

However, Kissin said that's likely not the case.

"That's a common misconception," he said. "A meteor shower is actually the tail of a comet, and they don't deliver, as far as anyone knows ... anything to the Earth. So this appears to be a coincidence."