The music of Canadian legend Stompin' Tom Connors will be alive once again in arenas and halls across Ontario.

'There's no way that I can fill the man's shoes,' says Taw Connors as he packs the house in Geraldton 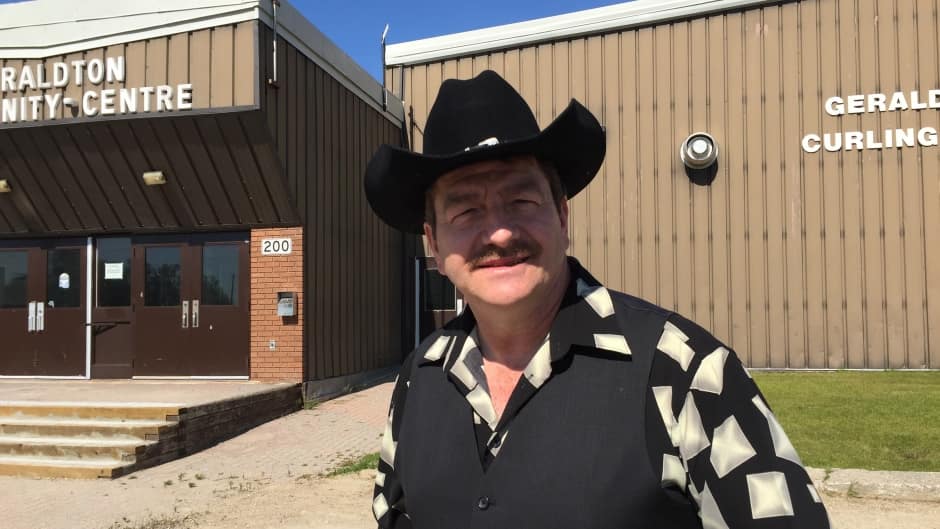 The music of Canadian legend Stompin' Tom Connors will be alive once again in arenas and halls across Ontario.

Taw Connors, the son of Stompin' Tom Connors, plans to take to the stage over the next two months at venues across Ontario in a tour he says is about paying tribute to his father.

It's been a dream years in the making for Connors, who kicked off the tour in his hometown of Greenstone, Ont., 265 kilometres northeast of Thunder Bay.

"I'll tell ya, for the last three years since my father passed, I've been, it's been in the back of my mind to turn around and do this," said Taw Connors, before his first stage show in Geraldton, one of the communities in Greenstone.

"My kids, my two daughters and my wife have been telling me, 'You've gotta do this. You just sound too much like him, you have to turn around and do this.'"

"If you close your eyes, you wouldn't know who's singing. And he does his stomping, he does the stomp. And of course he wears the black hat like Tom did, and he wears the black clothes," said Edward Koski, who was one of the 300-plus people to go to Connors' first show.

Nearly a quarter of the town showed up for the inaugural show. Town staff had to borrow chairs from neighbouring arenas so everybody could get a seat.

Superior Morning8:01Taw Connors
The music of a Canadian legend lives on in the northwest...and it all got started this weekend in Geraldton. The son of Stompin' Tom Connors, Taw Connors took to the stage for the first time, and Jeff Walters takes you there. 8:01

"I knew he was going to get a good crowd, but not like this. I'm even hoping I get a seat. If I don't get a seat, I'm going to go talk to him," said Koski.

Connors has wanted to tour for years. It took him a few years of saving up to be able to afford to get on the road, and be able to sing his father's music.

"There's no way that I can fill the man's shoes. There's only one Stompin' Tom Connors. But, I'm his son, and I'm going to turn around and do the best I can for our Canadian people," he says.

The catalyst for heading out on the road was a moment at a seniors' complex in Geraldton. Connors was asked to play a handful of songs for the residents, and ended up playing for nearly two hours.

That's when one patient with Alzheimer's, sitting in the front row, got up and shook Connors' hand.

"That fella thought I was Stompin' Tom at that moment, and it made me feel so good. That's the incentive I needed to turn around in do this tour. Now, I'm 100 per cent in, and I'm going to do the best job I can for everybody and their memories."

Connors hopes to be on the road until the end of October, playing across Ontario. He already has performances booked in Acton, Midland, Port Elgin, Shelburne, Fort Frances and Thunder Bay.

"I'm doing the best to honour my father, honour the Canadians of this country, and honour our country. And, I'm going to do the best goddamn job I can."