A team of engineering students from Lakehead University's Thunder Bay, Ont. campus are celebrating a big achievement this week as they placed first at the Canadian Engineering Competition in Toronto.

A team of engineering students from Lakehead University's Thunder Bay, Ont. campus are celebrating a big achievement this week after placing first at the Canadian Engineering Competition in Toronto. 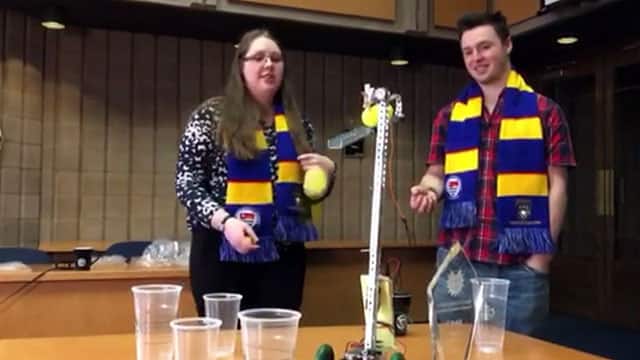 "They gave us a problem statement during the briefing, which was right before the building time," software engineering student Megan Eyben said, "so what we had to do is build a device that could put out fires on different levels of the buildings using water grenades ... and we had to remotely control it throughout the city."

She said the team — which consists of two students from the software engineering department as well as two mechanical engineering students — had a total of eight hours to solve the problem and create a solution.

"There was a fake city basically that they said there is six fires burning at different levels ...[and] the city is understaffed and they need to build a robot that is able to go around and put them all out," mechanical engineering student Caleb Frisbe explained.

He said on top of having to accurately launch water bombs at multiple buildings, the robot also had to be driven using a wireless control as it navigated through a 3D cardboard city.

"I think the first step was just how to get it moving first of all with the wheels and how to get it to turn and also how to connect it to the wireless controller," Eyben said, "they provided us with two DC motors, which we weren't entirely comfortable [with], so we had to figure out how to get that working in order to make our device actually move."

Using ping pong balls, Eyben and the team constructed a device with a slide.

"Some teams had launchers to shoot the balls out, " Ebyen said in a written release on Tuesday, "we went through a few different designs, but this was our main one."

Problem solving skills, understanding how to approach a problem, brainstorming possible solutions and narrowing down the options are all skills that the four engineering students had to apply in order to place first in the national competition.

"We are very proud of the achievements of our talented students in this competition and this award fully demonstrates how the students benefited the most with our engineering programs," Acting Chair of Software Engineering, Rachid Benlamri said.

He said engineering students at Lakehead University are offered classes that are inter-disciplinary, which means students will have to take courses from other faculties like business in order to complete their engineering degree.

"Our curriculum is based on a cross-disciplinary type of education," Benlarmi explained, "we offer a diverse learning exposure that allow our students to exceed in terms of solving very complex real-life engineering problems."

He said although the team of engineering students went into the national competition without any previous knowledge of the problem they'd be asked to solve, he's not surprised of their achievements and success.

"Providing students with all the knowledge and the skills that allow them to solve something that they haven't seen in the past, that's what we call engineering," Benlarmi said.