Sudbury NDP MP Glenn Thibeault says he hasn't been seeing eye-to-eye with the federal NDP for a while. So when the newly elected Joe Cimino suddenly resigned as Sudbury's MPP last month, Thibeault said he saw an opportunity to represent the riding in a different way.

Thibeault told Mulcair on Sunday he was considering options, but didn't get a chance to tell him in person 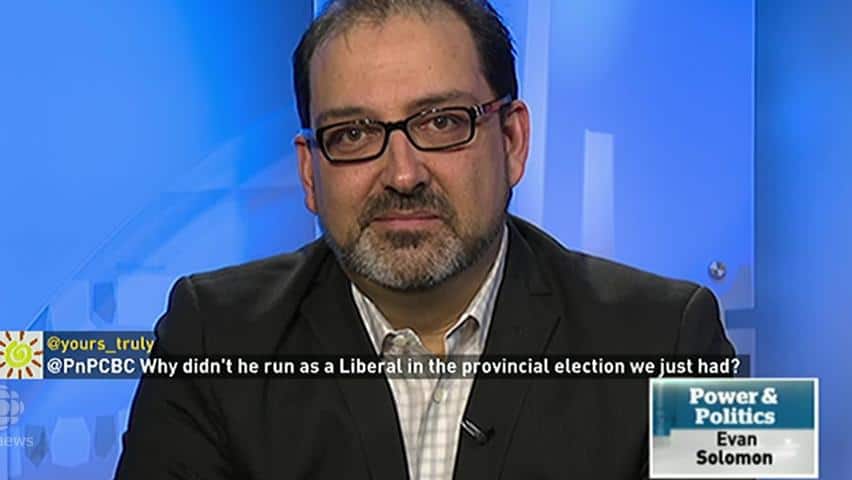 6 years ago
9:20
Sudbury MP Glenn Thibeault explains why he's leaving to run for the Ontario Liberals. 9:20

Sudbury NDP MP Glenn Thibeault says he hasn't been seeing eye-to-eye with the federal NDP for a while. So when the newly elected Joe Cimino suddenly resigned as Sudbury's MPP last month, Thibeault said he saw an opportunity to represent the riding in a different way.

But it involved crossing the floor and becoming a provincial Liberal.

"I'm invigorated to be able to now talk about issues that people talk to me about on a daily basis,” he told CBC News Tuesday afternoon.

But it'll be up to voters to decide if they want Thibeault to represent them at Queen's Park.

Some CBC News listeners weighed in with these comments:

"I was hoping he would stay on as NDP."

"I might change my mind a little bit. I'm kind of happy that he's switching over to Liberal."

"I'll have to reconsider where my vote is going to go because I think loyalty is a big factor."

Up North9:45Glenn Thibeault speaks on decision to run for provincial politics
New Democrat member of parliament in Ottawa, Glenn Thibeault will be running in the upcoming provincial by-election in Sudbury. 9:45

Up North5:48Sudbury Liberal Riding association head reflects on candidate
The Liberal riding association in Sudbury is not happy with how this process to appoint Glenn Thibeault has unfolded. 5:48

Thibeault said he understands why some people might be upset with him — but said he hopes they'll reconsider by looking back at his six years of representation as Sudbury's Member of Parliament.

Thibeault added he'll resign as MP as soon as he makes arrangements for his staff.

“We'll have to look at all the things that they're proposing,” Thibeault said.

“Right now I'm focusing on making sure I'm looking at the Ontario Liberal piece and I've got lots to learn.”

'Excited by the opportunity'

In a statement release Tuesday, Thibeault didn't mention the NDP — but the implication seemed clear: Thibeault doesn't believe the New Democrats are likely to form the government after next year's federal election.

"I am excited by the opportunity to continue that representation in a new, exciting way. I believe I can make an even greater difference for the constituents of Sudbury as a member of this Ontario Liberal government."

Thibeault said he told Mulcair on Sunday that he was considering some options, but didn't get a chance to tell him of his decision to jump to the Ontario Liberals before the news became public Tuesday morning, at which point he sent Mulcair an email informing him of his move.

Until recently, Thibeault was chair of the NDP caucus, an elected position that reflected his popularity among his fellow New Democrat MPs. He stepped down two weeks ago, citing the need to spend more time with his young children.

His decision to jump to the provincial arena and switch parties came like a bolt out of the blue to his former colleagues.

"Glenn didn't reach out to any of us, didn't talk to any of us about this," said London MP Irene Mathyssen, who succeeded Thibeault as caucus chair.

"We're sad, we're disappointed because we were all, I think, very fond of Glenn."

Even Thunder Bay MP John Rafferty, who calls Thibeault his best friend on Parliament Hill, was completely in the dark. He knew Thibeault "was unhappy" but thought it was just a matter of missing his kids.

In his statement, Thibeault said he's read the mandate letters Wynne has assigned to cabinet ministers and parliamentary assistants — an odd reference that sparked speculation he's been promised a cabinet post.

"I suppose the allure of power is something that some people are grabbed by," Mathyssen said in an interview.

Prospects for federal New Democrats are not so alluring these days, following a string of depressing byelection results. The NDP's share of the popular vote has declined — and in some cases, collapsed altogether — in all but one of 11 contests held since Trudeau took the Liberal helm some 20 months ago.

By contrast, the Liberals have seen their vote share increase, often dramatically, in each of the byelections. They even managed to snatch Trinity-Spadina — the iconic downtown Toronto riding formerly held by Olivia Chow, widow of late NDP leader Jack Layton — from the NDP.

Nationally, public opinion polls consistently suggest the Liberals, left for dead after the 2011 election, have rebounded into the lead. The NDP, which vaulted past the Liberals in 2011 to become official Opposition for the first time in history, has sunk back to its traditional, distant third-place slot.

Mulcair once boasted that the strength of the NDP provincially would help the party federally. But the party has taken a series of hits on that score as well over the past two years.

Last year, the NDP squandered a substantial lead in British Columbia's election and lost government in Nova Scotia. This year, there has been leadership grumbling over the NDP's disappointing showing in the Ontario election and a cabinet revolt in Manitoba that threatens to destroy the only NDP government in the country.

Mathyssen dismissed all that, arguing that the polls will turn around closer to the election, when voters start paying attention and realize that Trudeau and the Liberals are really just Conservatives "in rental clothes."

"I have great faith and hope," she said.

Ontario New Democrats, meanwhile, reacted with anger to Thibeault's decision, calling him a "turncoat," while Wynne said she was thrilled he would become a Liberal candidate.

Rookie New Democrat Joe Cimino surprised everyone by resigning his Sudbury seat in November after just five months as an MPP, citing family reasons for his decision.

Wynne has until next May to call the byelection in Sudbury, and said Tuesday she would announce the date in the new year.