What has become a haunting memorial in downtown Sudbury, Ont., started with a single white wooden cross erected by a grieving mother in October, at the spot where her 22-year-old son had died of an opioid overdose. A few months later, there are now more than 150 wooden crosses at the site, each bearing the name of someone else — another life lost to the opioid crisis.

As they remember their loved ones in a growing memorial, grieving family members are calling for action

What has become a haunting memorial in downtown Sudbury, Ont., started with a single white, wooden cross erected in October.

A grieving mother put up that first cross at the spot where her son, 22-year-old Myles Keaney, had died of an opioid overdose the month before.

Now, there are more than 150 wooden crosses at the site, each bearing the name of someone else — another life lost to the opioid crisis that is taking its toll on this northern Ontario city and its people.

The crosses are meant to honour those who have died and also to raise awareness. And as the tribute grows, so does the call for action from grieving families, advocates and the broader community.

"Our family gravitated to where he was found," said Keaney's mom, Denise Sandul, of the weeks after her son's death. "We started with some flowers, and then eventually we just decided to put a cross."

After putting up a simple white cross at the spot where her son's body was found, she invited others who had lost family members to do the same.

Soon crosses were going up by the dozens, and the memorial moved to a larger site at the intersection of Paris and Brady streets, around the corner. Many crosses include photos, and some have flowers, messages and memorabilia. Each one has a name.

Family members continue to add more crosses, in the rows alongside Keaney's,

Sandul described her son as loving, kind, and a natural athlete.

"These are brothers, sisters, mothers, fathers ... daughters and sons that are loved and missed and mourned by the families," Sandul said.

People in communities across Canada are struggling with addictions, as the country remains in the grips of an opioid crisis. In Sudbury, overdoses have been increasing at an alarming rate in recent years.

With a population of just over 160,000, the per-capita death rate in Sudbury has been eclipsing the provincial average in recent years. It was 28 per 100,000 people in 2019, the highest of any public health unit in the province. The same year, the provincial rate was 10.3 per 100,000, according to Public Health Ontario. 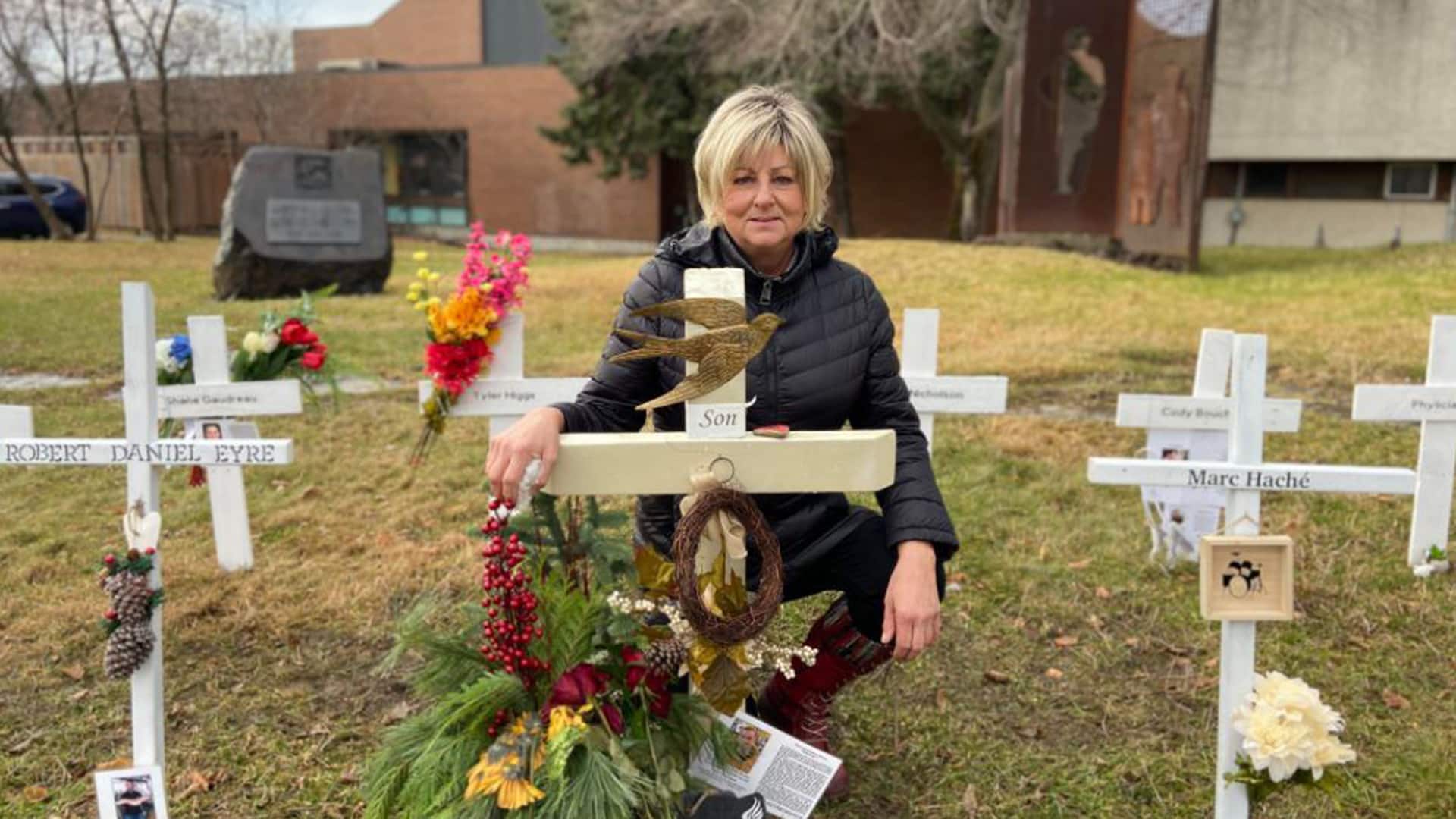 Sudbury memorial for victims of the opioid crisis

1 month agoVideo
2:11
Families in Sudbury, Ont., are raising the alarm about the opioid crisis by planting 150 crosses for their loved ones, all started by one mother who lost her son. 2:11

"We're dealing with deaths of young people a lot more often than we're used to, and that definitely has a toll on people," said Sudbury paramedic Curtis Watson.

The situation has changed drastically in the past 16 years since he started his career. Back then, it wasn't common to respond to an overdose, but now front-line workers do those calls on a near daily basis, he said.

Walking through the rows of crosses earlier this month, Felicia Fahey said she recognized about half a dozen names. Some she knew from her past, some through her kids and others through her cousin, Steven Legault, who also died of an overdose in September.

Legault had been living with alcohol addiction for more than two decades and turned to opioids just weeks before his death, said Fahey.

"I think that a lot of people have like a Superman syndrome," Fahey said. "They believe that it will never happen to them. Despite the fact that they can see it's happening to people all around them."

Legault's death, just weeks after Keaney's, came at a time when a larger conversation was starting in Sudbury.

A local Facebook group — which has grown to include thousands of members — encouraged people to share their stories. And the following month, on a busy downtown street corner, Sandul's family and others put up cross after cross.

Fahey says the public discussion has helped her family to grieve.

While tackling stigma is part of their aim, the grieving families who have contributed to the white cross memorial say they want to see more government action to address the opioid crisis, including more rehabilitation treatment programs.

"We've tried getting Steven resources time and time again," said Fahey. "I feel like for a while I was a government expert on addiction resources.

We need help right now. All of the focus is on COVID-19.— Brian Bigger, Sudbury mayor

The province is focused on expanding capacity and shortening wait lists for treatment centres, while also focusing on areas like education and housing, said Michael Tibollo, Ontario's associate minister of mental health and addictions.

"It's by no means a perfect system, but we're well on our way to building a foundation that I believe that over the next course of time will make a profound difference in every part of the province," Tibollo said.

"We need help right now. All of the focus is on COVID-19," Bigger said. "However, you can see the number of crosses, we have significant challenges here in Sudbury and Northern Ontario and across Canada."

Some advocates say what's needed to save lives is a harm reduction model, which would include a supervised consumption site and a safe, regulated drug supply.

Among them is Amber Fritz, the outreach co-ordinator at the Réseau Access Network, which works with people who use injection drugs, and those living with addiction.

"Our numbers [of fatal overdoses] are going up, and I don't see that changing any time soon when you look at how toxic the drug supply is," said Fritz. "It's heartbreaking, but it's infuriating because it's preventable."

Tibollo said while the province hasn't dismissed the notion of a safe supply program, he says he has concerns.

"We need to do whatever we can to save lives, but at the same time we've got to make sure that we get to the point that we are saving lives, and not just you know creating situations where we're prolonging or still allowing opportunities for an individual to overdose," he said.

Sudbury's Community Drug Strategy, spearheaded by the public health unit, is working toward implementing a supervised consumption site in the city. However five community applications for a site were recently rejected, as they did not meet the strict provincial and federal government criteria.

Some community members have decided they're tired of waiting. In 2019, a volunteer-run group started an un-sanctioned supervised consumption site. It reappeared last month after a hiatus.

Set up with tents and a trailer in a downtown parking lot, just blocks away from the rows of white crosses, organizers include a nurse, along with community members who help set up and facilitate the site once a week.

Alison Wood has been volunteering with the Sudbury Temporary Overdose Prevention Society since it was established in 2019. She says about 20 to 30 people show up each week.

Wood says waiting for a permanent site has been painful, as she watches the number of crosses steadily grow, often wondering what name she'll recognize next.

"A lot of those people were found by themselves," she said.  "So, I mean, that could have been some saved lives."

As the epidemic rages on, Denise Sandul is busy gathering names for even more crosses, soon to be erected alongside her son's.

But as she witnesses the people who stop by and visit the crosses, and those who are sharing their own stories of addiction and loss, she feels grateful to have started a conversation, which she hopes will continue.