Crews were busy this week cleaning up the remains of six camps on Georgian Bay that burned in the Parry Sound 33 forest fire this summer. Questions remain though about how the charred landscape will recover and what sparked the destruction in the first place. 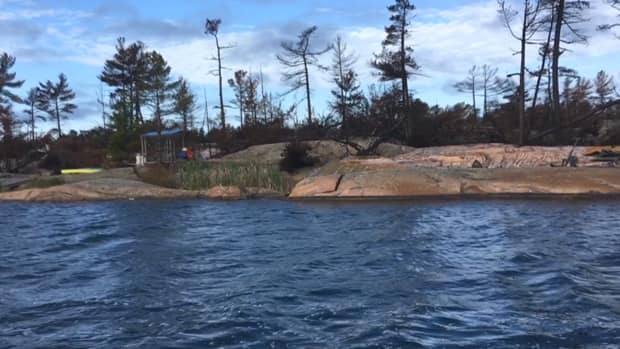 Trip up the Key River after the forest fire

Jane Lee and her brother brought a big Rubbermaid tub this week when they returned to Humbum Island on Georgian Bay.

The island camp has been in their family since 1962, but they can barely recognize it now.

Almost all the buildings and trees on the island were burned in the Parry Sound 33 forest fire, leaving behind charred stumps and piles of twisted metal.

The Rubbermaid tub was in the hope they might recover from family artifacts as crews cleared away debris this week.

"There was a little brown tea kettle sitting there and a few mugs but when you picked them up you realized they were cracked. The stacks of plates that had been on a wooden shelf were basically melted together," says Lee, who lives in southwestern Ontario.

"There were some memories there we had to say goodbye to."

Lee had really hoped that the logbooks where visits to the camp had recorded decades worth of memories and stories might have been saved because they were in a drawer but "everything was ash. Everything that could burn was gone."

The crews clearing away trees and charred wreckage are being paid for by Henvey Inlet Wind.

The company, a partnership between the nearby Henvey Inlet First Nation and U.S.-based Pattern Development, is building an 87-turbine wind farm in the area.

But spokesperson Jennifer Pereira says there no evidence of that and that is unrelated to its decision to help with clean-up efforts.

"We're trying to be good neighbours. As far as the investigation or the fire goes, we haven't seen any evidence of a link between the fire and construction activities," she says.

The Ministry of Natural Resources and Forestry is still investigating the cause of Parry Sound 33 and it is still trying to put it out.

The fire has been under control for over a month now, but fire information officer Shayne McCool says there are still hotspots that fire rangers need to douse.

Chris Dawson, who runs the Key Harbour fishing lodge, says he is taking a loss on the season after being forced to evacuate for four weeks and having to cancel his bear hunting customers for this fall.

But he is more concerned about how the postcard-worthy Georgian Bay landscape will recover from this scarring.

"Going to be a real slow process for nature getting back to what it was. Like the trees are going to be gone for a long time. Just a whole different landscape from what it was," says Dawson.

For Jane Lee, she says there were moments looking at the charred island where she's spent so many summers that she forgot what it used to look like.

She says her "act of defiance" was to put on a bathing suit, slip down the smooth rocks and go for a swim.

"That was really comforting to me. Once I was in the water, it felt very much like it always had. I just looked up at the sky and you could look at the rocks and everything looked the same," says Lee.

"One thing about those Georgian Bay rocks, they've been there for thousands of years and will be there for many thousands yet. And the trees will grow back, not in my lifetime, but it will carry on."