A change in wind direction is helping crews battle a massive forest fire in northeastern Ontario, but it's bigger than originally thought and smoke continues to be a problem.

Favourable weather conditions, notably a change in wind direction, are helping crews battle a massive forest fire in northeastern Ontario, but Parry Sound 33 is bigger than originally thought and smoke continues to be a problem.

The fire was 11,039 hectares in size Thursday, though the Ministry of Natural Resources and Forestry said that doesn't mean it had grown dramatically.

"Recent weather allowed more accurate aerial mapping of the fire," the ministry said. "Aerial ignition in the southeast added to the increased size."

The winds were coming out of the east, pushing the fire's direction to the west and away from Highway 69 (Trans-Canada Highway).

"Unfortunately, we didn't see much if any rain in the fire area," he said. 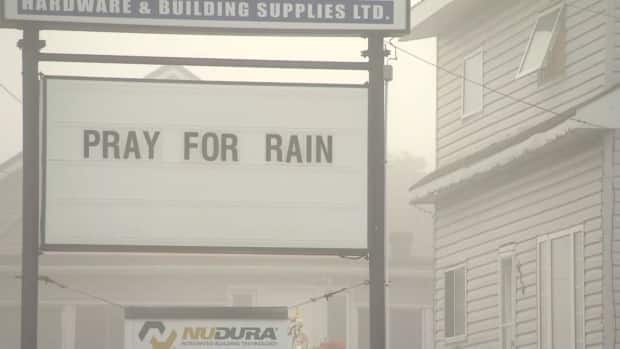 Town of French River, Ont., residents are praying for rain

2 years agoVideo
0:44
Residents living in French River are dealing with a lot of smoke and hoping the fire remains under control so they don't lose houses. 0:44

"There was a bit of a dry spot right where the Parry Sound 33 fire is. But that said, the conditions the weather did bring was a change in wind conditions."

The fire is still about 4.5 kilometres from the Trans-Canada Highway.

"The smoke conditions could create a change there. In that case, the [Ontario Provincial Police] will decide … whether or not to close the highway."

Cole said if that were to happen, the information would be available to the public through the police and the Ministry of Transportation.

Suppression efforts have been underway to help protect buildings from the fire.

However on Thursday, Cole said some properties have been destroyed.

"Our current information shows 13 structures have been lost due to the fire activity," he said.

"An investigation is underway and notification of those property owners is in progress."

Hundreds of people in Henvey Inlet First Nation, as well as a number of areas within the municipality of Killarney, remained under evacuation orders Thursday.

The village of Killarney is not affected by the fire.

Killarney's emergency manager, Jim Rook, said it has been a tough time for those forced from their homes and cottages.

"Fortunately, everybody is out safely. We've had no injuries or deaths, which is great news," Rook said. "We're now starting to work on a recovery plan. We just need to get some rain so we can get these implementation orders removed and we can return everybody to their home."

Rook said crews were having some success keeping the fire south of the Pickerel River and away from the CN trestle bridge in that area.

The evacuation alert for the community of Alban remained in effect Thursday.

Hundreds of forest firefighters have been brought in from across Canada, the United States and Mexico to help battle forest fires in Ontario.

Now, the province is putting the call out to retired firefighters to help.

"We are doing everything we possibly can to ensure that people are safe and property is not affected, including seeking the help of highly skilled wildfire response support personnel who have retired," said Natural Resources and Forestry Minister Jeff Yurek.

"During my recent visit … I got to meet many teams that are working tirelessly to fight these wildfires and I saw first-hand how tough the work can be. So, to the retired personnel who have agreed to help out this year, I extend my sincerest gratitude."

The province says in the event that more resources are required and other national groups aren't able to assist, it is "prepared to seek more assistance from international partners."