As Attawapiskat Chief Theresa Spence continues her hunger strike on Parliament Hill in an attempt to get a meeting with Prime Minister Stephen Harper, a grassroots protest movement of First Nations activists across Canada has united on social media and at public rallies. 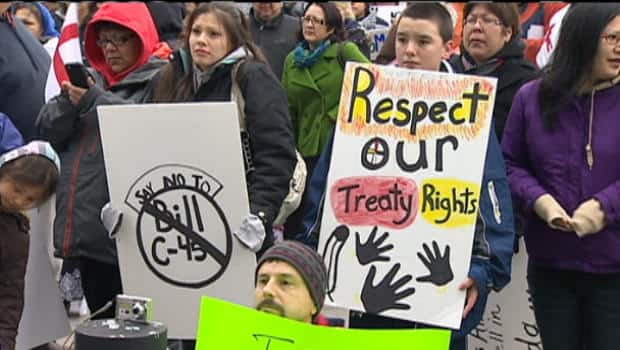 As Attawapiskat Chief Theresa Spence continues her hunger strike on Parliament Hill in an attempt to get a meeting with Prime Minister Stephen Harper, a grassroots protest movement of First Nations activists across Canada has united on social media and at public rallies.

Idle No More's supporters say they are upset about the effects of the Harper government's policies on their communities. They want First Nations to be recognized as sovereign stakeholders in decisions affecting the country's land and resources.

Spence’s hunger strike underscores that wish. Now, after more than a week without eating, concern is mounting about her health as she protests what she sees as a lack of respect for the treaty rights of First Nations.

Mushkegowuk Grand Chief Stan Louttit has been keeping a close eye on developments with Spence.

Louttit said leaders and communities across the country are uniting in protest in a way he has not seen in the past.

"They can all relate to the fact that communities are in despair," he said.

"Over a year ago, Attawapiskat declared an emergency for lack of housing and they are still not out of the woods. And they brought national attention to their issue. And people are seeing that and feeling that."

Louttit said Spence's protest shows a long-standing fight over treaty rights has come to a head.

"The government does not want to talk about the treaty," he said.

"The way they look at it is ‘this is 120 years ago and that's old business.’ But we are saying the treaty of 1905 is as relevant in terms of spirit and intent then as it is now."

Attawapiskat is covered by Treaty No. 9.

Author and Nipissing University Prof. John Long, who has written a book about the treaty, said there is conflict due to interpretation.

"Virtually every treaty has this built-in contradiction," he said.

"One party looks on it as a real estate transaction, giving up the land and rights to the land and the resources…and the other party says, ‘We agreed to share and there were promises made to help us and protect us.’"

Aboriginal Affairs Minister John Duncan told a CBC reporter last week that the rallies are a result of social media.

"We'll just have to see where that goes," he said.

Duncan proposed a meeting with Spence to discuss issues affecting Attawapiskat, but there was no response.

Quebec City-based writer and activist Nora Loreto recently blogged, "Idle No More has reminded me that there exists massive gulfs between people, experiences and awareness."

She claims there’s been an "effective media blackout" on the cause.

"After an aggressive social media campaign, flash mobs, rallies, blockades, co-ordinated actions, letters of support from national unions and a hunger strike, the media coverage has still been significantly lacking," she said.

"How can someone know what’s going on if none of their friends are talking about it?"

The campaign was started by four women from Saskatchewan who were protesting against a number of bills before Parliament. They are particularly critical of Bill C-45, the government's omnibus budget legislation, which they say weakens environmental laws.

"There are many examples of other countries moving towards sustainability, and we must demand sustainable development as well," says a manifesto published on the group's website, idlenomore.com.

"We believe in healthy, just, equitable and sustainable communities and have a vision and plan of how to build them."

Louttit is concerned that Spence’s quest to bring this message to Canada’s top leaders is heading down an unhealthy path, however.

"She's a mother and a grandmother and there's a lot of people, I think, that are worried about her," he said.

The federal opposition parties and the head of the Assembly of First Nations have urged Harper to take steps to end the hunger strike.

In a letter to Harper, NDP Leader Tom Mulcair called on the prime minister and the Governor General to meet with aboriginal leaders to end the protests.

"I ask that you please act swiftly to avoid a personal tragedy for Chief Spence," Mulcair wrote. "I look forward to your early positive response to this urgent matter."

Spence has been living in a teepee on Victoria Island in the Ottawa River, less than a kilometre from Parliament Hill, since beginning her fast Dec. 11.

Victoria Island is considered by the Anishinabe as traditional territory. New Democrat MP Paul Dewar visited Spence on the island Tuesday and reported that she is so far in good health.

Harper met with Assembly of First Nations Chief Shawn Atleo as recently as Nov. 28 to review progress the government has been making in addressing aboriginal issues, said spokeswoman Julie Vaux.

"The prime minister hosted an historic gathering of the Crown and First Nations this past January," Vaux said in an email.

"Since then, the government has been working with First Nations leadership to make progress in several areas, most notably education and infrastructure on reserve."

The Liberals and the Assembly of First Nations also sent letters Tuesday to Harper and Gov. Gen. David Johnston, calling for an urgent meeting to discuss Spence's demands.

"I urge you to agree to participate in this meeting and meet with Chief Theresa Spence to hear directly from her why she has felt  it necessary to take such drastic action," wrote Liberal aboriginal affairs critic Carolyn Bennett.